Rivoalto: the new project by Alessandro Zambelli for Portégo at Maison & Objet 2015 it has been modified: 2022-06-02 di Benedetto Fiori

Alessandro Zambelli presented at the Parisian appointment of Maison et Objet Rivoalto, a small suspended storage console that embodies all the charm of the Grand Canal and its symbol par excellence.

Inspired by the unmistakable arches of the Rialto Bridge, the project inaugurates the designer's new collaboration with Portégo, a company founded in 2014 with the aim of creating design collections strongly connected to the territory of origin - Veneto - with its wealth of culture, of art and history.

"Everything emerges from the water.
Everywhere penetrates the predicament,
ripullula channels, falters along the quays,
runs between the houses, churches laps, you lose the horizon.
The sea smooth, bright wraps,
He surrounds and invades Venice, as a glory. "
Hippolyte Taine, Voyage to Italy, 1866

First Marin Sanudo, historian of the Republic of the Lion, and Canaletto, "landscape artist" par excellence of Venice; but also Boccaccio, Shakespeare and Proust, up to contemporary Luca Campigotto, refined interpreter of the city and its vision of the night: they are connoisseurs of Rialto and its monument par excellence, the namesake stone bridge "great and monumental" erected just beyond half of the sixteenth century under the doge Pasquale Cicogna.

Rivoalto, the new project conceived by Alessandro Zambelli for Portego, draws its inspiration from the Rialto Bridge - the undisputed symbol of the Grand Canal and the entire city of Venice.

Rivoalto is a small suspension console that, in the succession of its volute niches, recalls and brings to mind the unmistakable marble arches of the monument par excellence of the lagoon city; a piece of furniture which, in its primary function - that of containing and displaying small household objects of utility or affection - also represents a tribute to the ancient Venice of the merchants.

In Rivoalto a set of soft scrolls, in their sinuous linearity, outline the succession of arches 4 later: so take life a form aesthetics essential, looking straight to minimalism and a nod to the symbols of the lagoon city. A mirror sea stretches along the arch more, in order to enclose and guard your dearest; within this surface appears the stylized outline of a tiny gondola, opening unexpected element to this small casket home.

Rivoalto measure 80 cm W x H 48 and 23 P and is made of cherry, with arcades declined in shades of teal, ivory white and yellow sand; the sea expanse / tilt door is composed of a steel foil which is also in green water; gondola / handle is rather crude bronze. 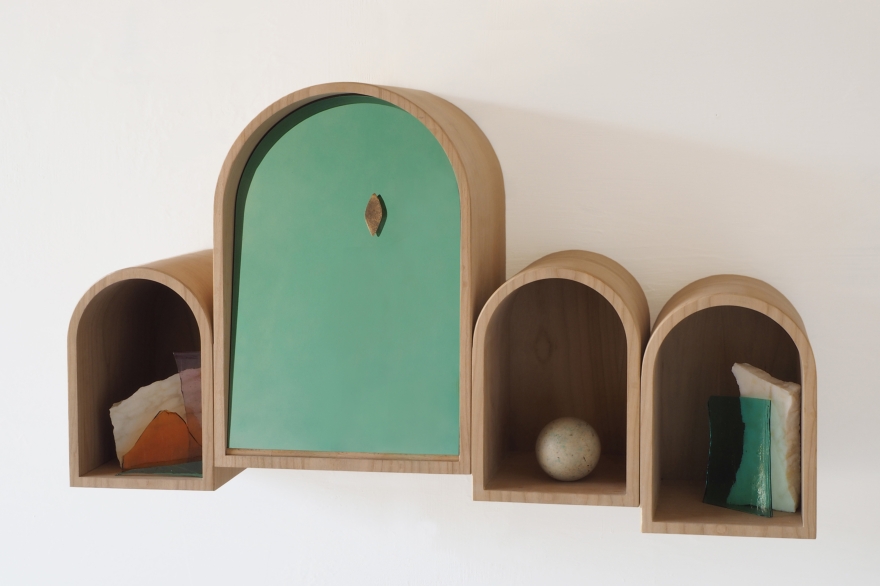 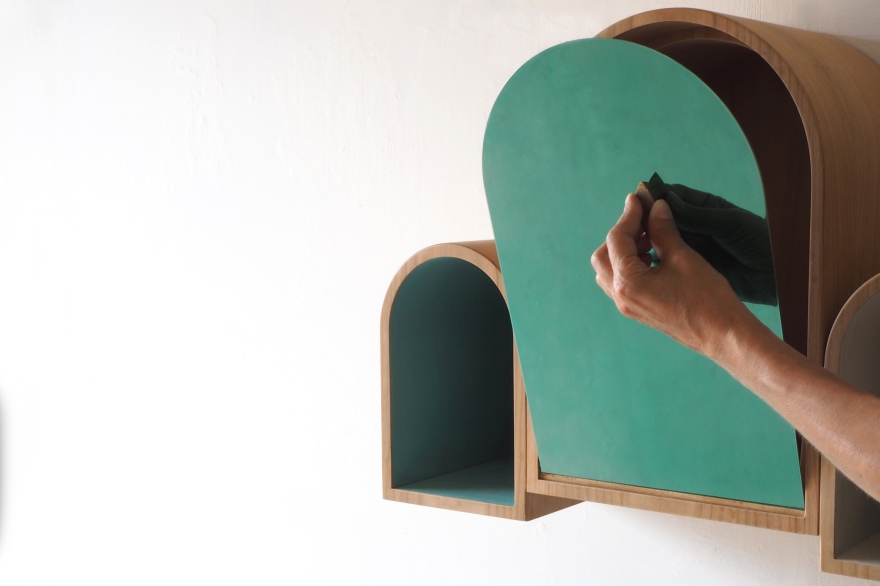 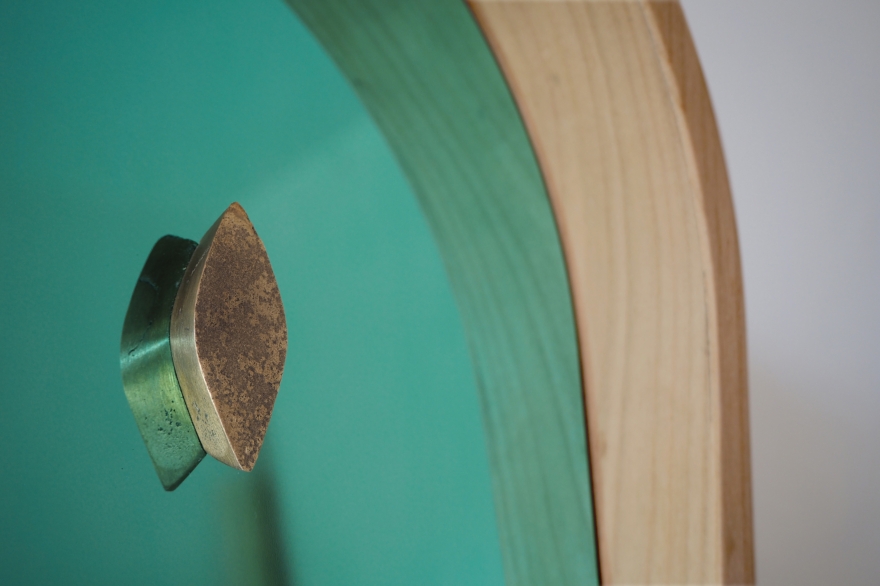 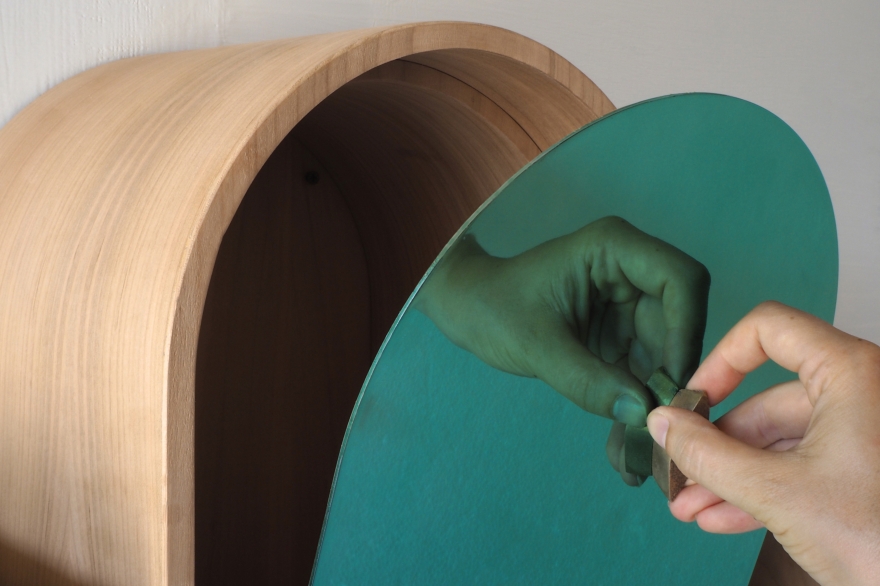 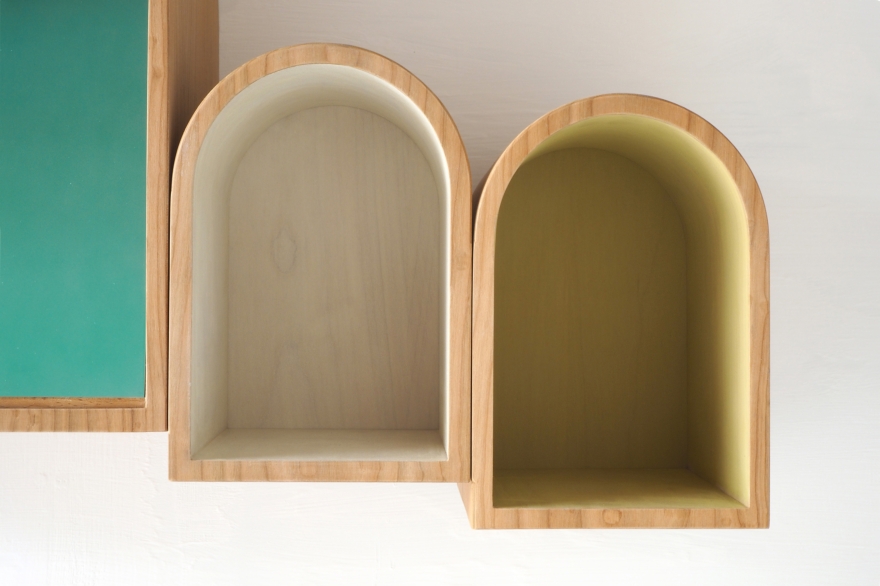 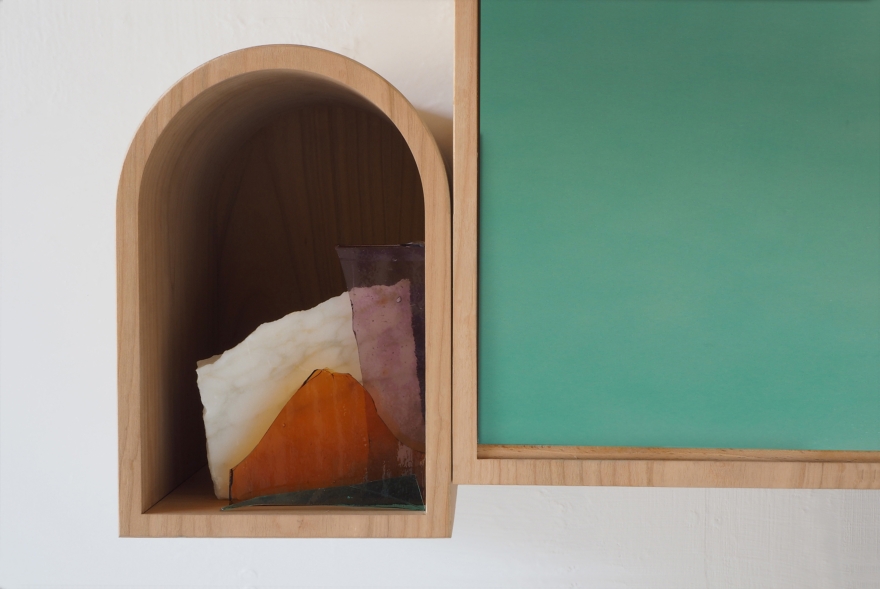