Contemporary banquet is an ambitious project promoted by Regione Umbria and CEU to renew the sector ceramic art umbra in respect of its secular tradition.

Innovation and design of artistic productions as instruments for the new competitive challenges of internationalization dates.

Each piece reflects the specific peculiarities, starting from their historical identity, only to be revisited in a modern way, where innovation and design play a fundamental role in line with market trends and international contemporary.

The symposium is one of the central elements of the classical cultures, from the ancient Greeks, it is also found in the habits of the Romans and in the customs of the Etruscans who lived in our area.

The observation of the current social scenarios you can find the same tendency to a collective sharing of eating and drinking, which is reflected in a growing diffusion of events as aperitifs, wine tasting, catering and banqueting in both private homes and in public places, both in Italy and abroad.

It is an attitude of sociability that has always been part of human history. A tradition that is renewed in a modern, just like the ceramic art umbra.

Design - the culture of design

The teacher and designer Elizabeth Furin, responsible for the design of the entire collection, through the principles of contamination and experimentation, conceives the culture of design as an important vehicle for promotion of artistic and as a catalyst for innovation that is the interpreter of contemporary, thus projecting the tradition in the future.

Mugs convent, of which some specimens are on display at the Museum of Ceramics in Deruta, were produced by local workshops for
many religious communities in the territory.

The classic tea service with cups and saucers, is updated in a practical set of stackable cups of type "mug" American, with three different relief decorations on which strokes of color done by hand making each cup unique. This set can be composed and extended the number of cups that you prefer, which by tradition resume feature handle protruding from the convent of the bowls. 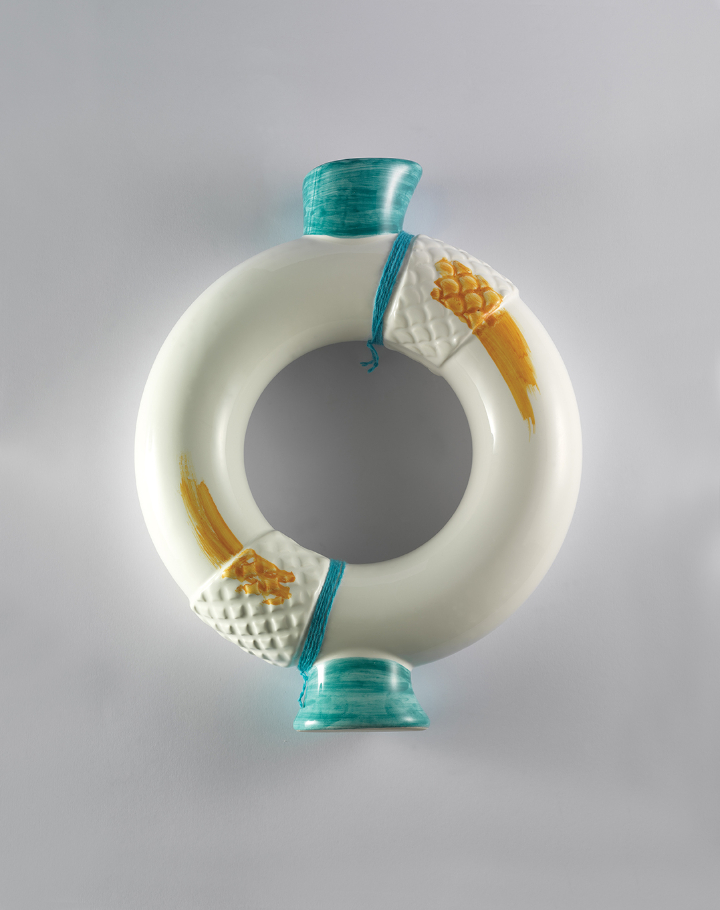 The flask was an object to travel to contain drinks, also its particular structure allowed the handle of multiple components. The traditional flask is characterized by a ring shape made of the lathe, hollow inside and equipped with stopper. Splendid examples are exposed to both the Museum of Ceramics in Deruta that the Wine Museum in Torgiano.

This container is inspired by the traditional pilgrim flask, which incorporates the annular shape which allows the jug to be "worn" for the transport and which can rotate on the arm as a support to pour the drink into the glasses with an elegant gestures effect, especially for public places and events standing. 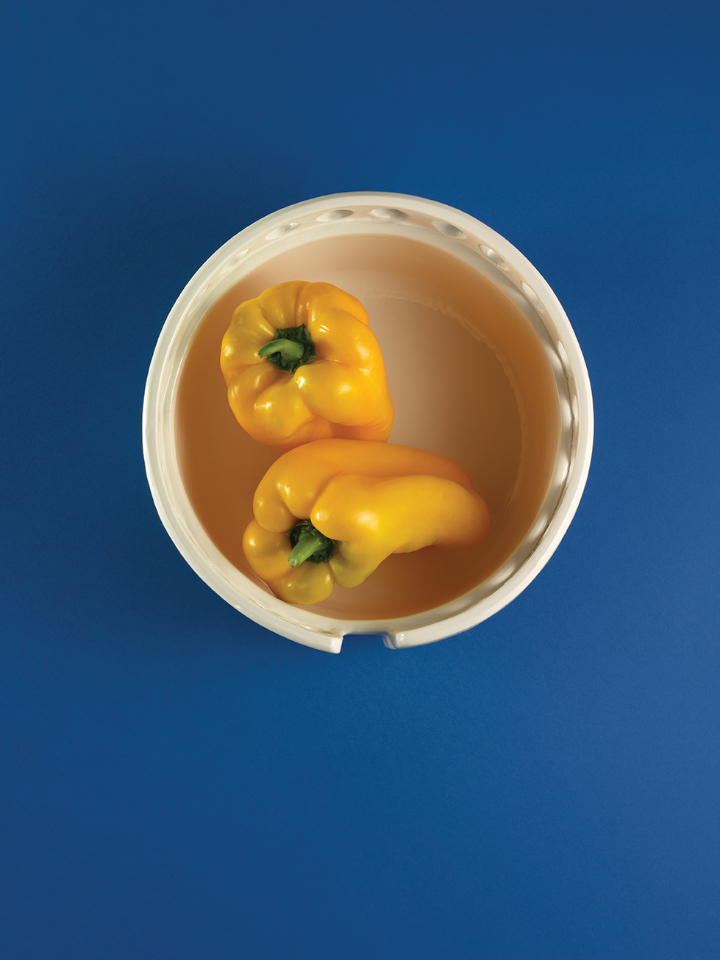 The drink-if-you is a type of container "on deception" belonging to the pottery amatorio, used to entertain diners and to drink at the same time a young married couple, very popular especially during the Renaissance period. The object consists of a cup from which it is impossible to drink in a conventional manner for the presence of a series of holes adjacent the edge, but that need to discover the secret operation to access the contained liquid, via ducts alternative. Some splendid examples of these cups are also stored at the Wine Museum of Torgiano (Perugia). 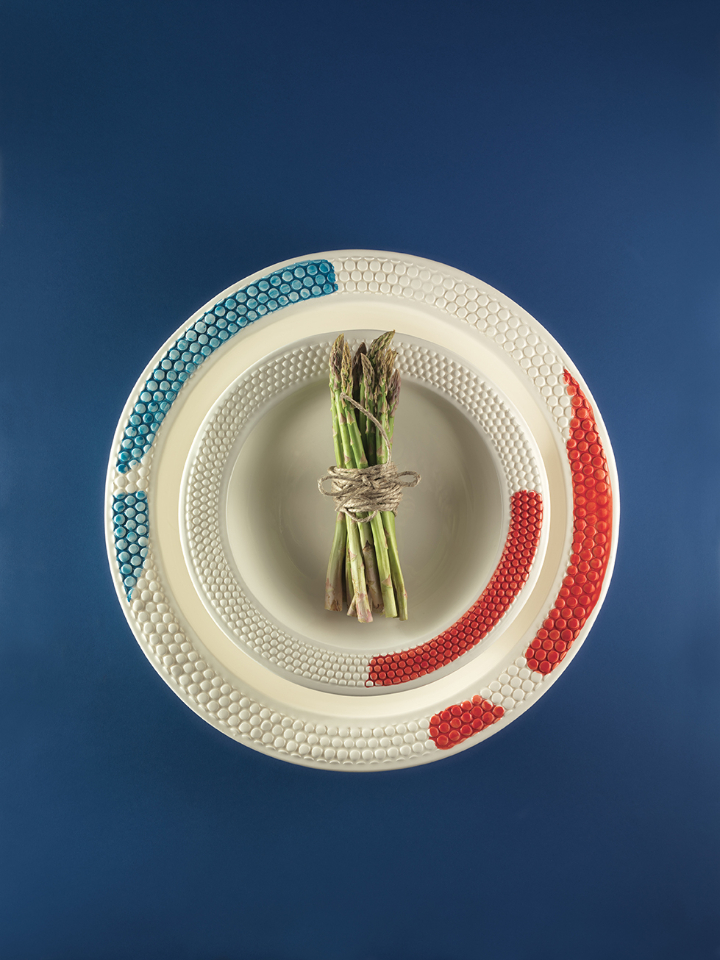 The basin with a jug for washing is one of the elements that constitute the kit pottery amatorio particularly common in the Renaissance. These large trays were designed especially for use celebratory and decorative, but also functional. Today many of these artifacts of Umbrian origin are
preserved in the most important museums in the world, such as the Victoria & Albert Museum in London and the Metropolitan in New York.

The tray is intended for both public and domestic premises. The object consists of a flat bottom, with an unusual ring shape that recalls some morphologies of tradition, and raised a bowl where you can place an ingredient or a different component to accompany the dish served. 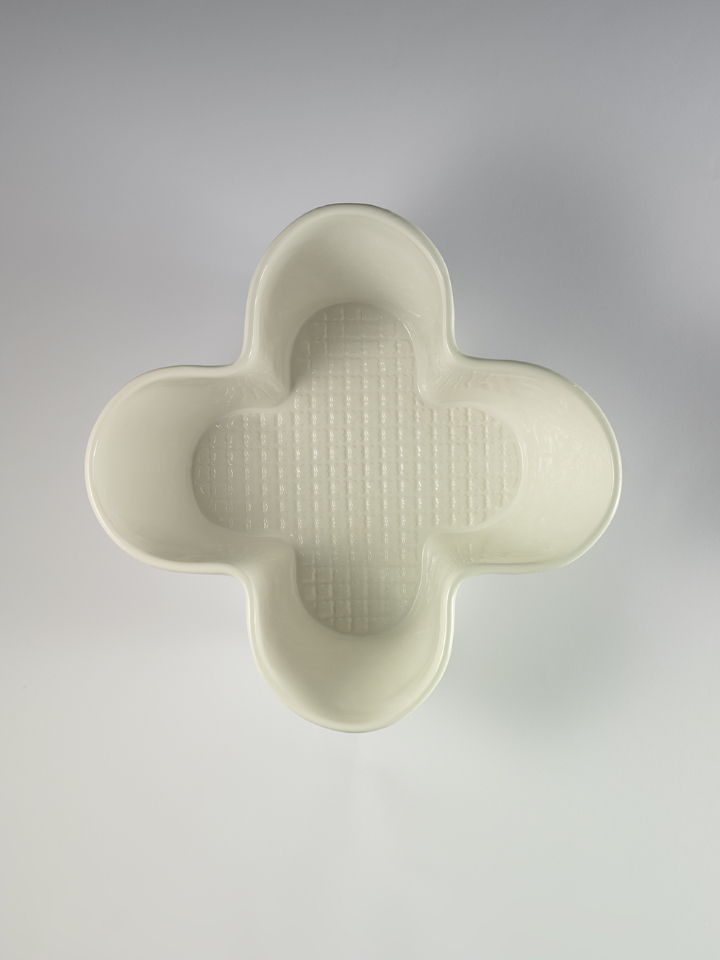 The quatrefoil is a pattern consisting of four semicircles arranged in a cross, widely used in painting, architecture and sculpture. Since the Middle Ages this symbol is particularly present during the period of the Renaissance.

Â The quadrilobo characterizes coatings, tiles and decorations of many historical architectures in Umbria and in many other Italian cities. The ice bottle holder is an element always present in bars, restaurants and clubs. This project uses the quatrefoil shape, which characterizes many
Decoration of the Umbrian towns like structure to hold four bottles and ice tilted. A pattern in relief on the bottom provides stability to the bottles even when wet.