LAKE and Listone Giordano offers a new concept for the retail system Plank, Cersaie 2014 it has been modified: 2015-10-14 di Benedict Flowers

The project, designed and implemented in collaboration with Plank Jordan, is the concept of a pilot project that will be adopted in the future by Plank store in the world and represents the first example of large-scale LAKE Inside,

part of the new communication model dedicated to the business world and presented by the company at the last Salone del Mobile.

Also this year on the occasion of the 2014 edition of CERSAIE, Held in Bologna from the 22 26 September LAKE renews partnership with Listone Giordano presenting a new concept for retail within the stand of the leading company in fine wood flooring.

And it does so with a stand project resulting from the four-handed work between Daniele Lago and the designer Marco Tortoioli Ricci of the graphic studio BCPT: 140 square meters that embody the new communicative vision of LAGO announced at the last Salone del Mobile and which represent to everyone the effects a LAGO Inside, an area where LAGO design helps to create beauty.

To create the displays, 73 linear meters of LagoLinea were used, forming 8 frames of two different sizes, which ideally reflect the measurements of the 36e8 modules, another iconic LAGO product that celebrates its tenth anniversary this year. The LagoLinea frames have been suspended on glass legs. A device designed exclusively for the Listone stand that contributes to making the installation even more aerial.

One of the frames welcomes the composition of a LAGO bathroom with Depth washbasin in Wildwood, the flagship model of the company's bathroom collection, completed by Slide shelves and mirrors and the Slide floor, designed by Daniele Lago for Listone Giordano.

Using the Air system, the two designers then distributed, within the stand, Air benches and tables of different heights, creating a game of staggered surfaces that seem to float in the air thanks to the transparency of the glass.

An evocative project that also gives the visitor a tactile experience: the top of the Air benches and the Air tables was, in fact, made with the floor finishes by Listone Giordano. A choice dictated by the desire to bring Listone floors to a height that allows them to be touched easily to discover their veins and textures up close. 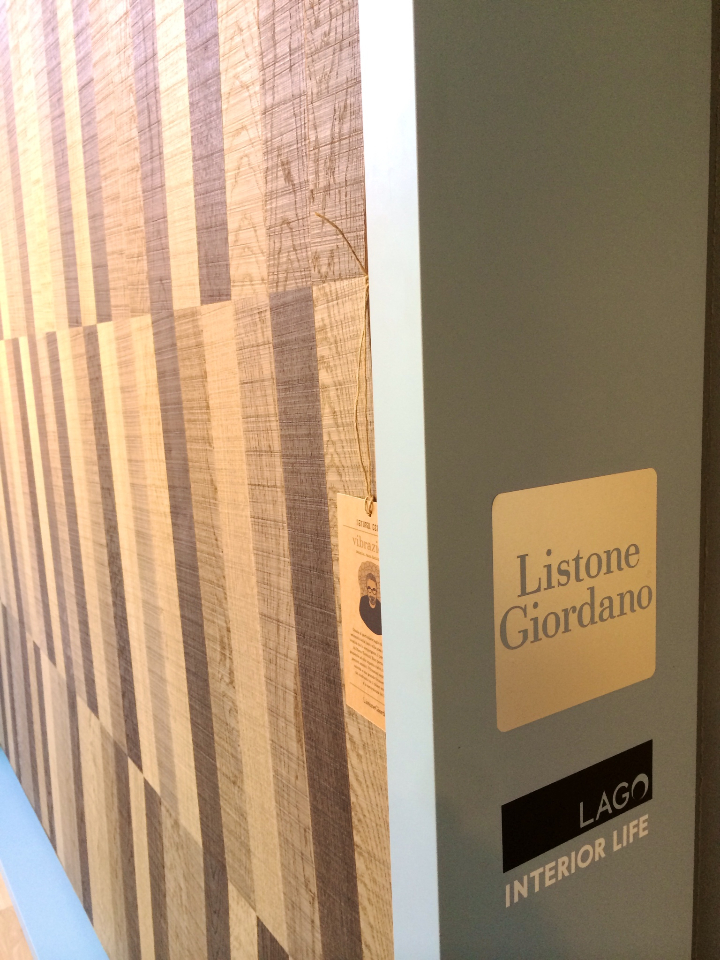 The stand also features a working 36e8 kitchen with an 8cm top in gray Wildwood, and a 5,5 meter long NOW wardrobe which help to create an atmosphere of home feeling, perfectly in line with the LAGO Interior Life philosophy that aims to design environments in empathy with those who live there.

The project represents a concrete example of LAGO Inside, part of the new model conceived by LAGO and announced during the last edition of the Salone del Mobile in Milan. LAGO Inside are places where LAGO products, thanks to the design project, improve the experience of those who live them in temporary or permanent areas in private homes, museums, galleries, airports, restaurants or, precisely , exhibitions.

The concept of the stand of Listone Giordano in this edition of CERSAIE will be adopted in the near future, in stores Listone Giordano, a network of well-600 outlets in Italy and in the world between Store and Corner.