“Cristalplant Design Contest 2014”: two winners and one mention it has been modified: 2022-06-03 di jessica zannori

For the 2014 edition, number six, the young designers who participated in the "Cristalplant® Design Contest"They are compared with the design of a complete line or independent products, for bathroom furniture.

An opportunity, that offered by the internationally known contest, which was seized by many. The projects stood out for their creativity and innovation. To win the first place, however, the proposals that have been able to combine the aesthetic aspect with the functional one in a more correct way, capturing on the one hand the technical and technological peculiarities of Cristalplant Biobased, on the other the style of Agape, a company with a well-defined character and culture.

In the context of bathroom furnishings, the jury chose to assign the first prize to Paolo Lucidi e Luca Pevere who presented themselves with the “Canal Grande” project. Both graduates from the Politecnico di Milano, they trained professionally with Marc Sadler and Marco Ferreri.

They began to sign the first projects together in 2003 and 2006 founded the study LucidiPevere. Through their proposals seek to deal with more and new types of products, contaminating them with aesthetic languages ​​and technologies unpublished, in constant search of their right expression.

"Grand Canal" is a project that comes from a memory made up of stories, perfumes and shapes and that materializes in itself some signs of an era and a symbolic object, the wash house.

Originally made of stone or concrete, it was used by all women and accompanied by a wooden table on which they washed their clothes with river water. An instrument now in disuse but strongly settled in the common imagination.

From these memories comes "Grand Canal" whose distinctive element is the large support surface that develops on the long side of the tub: this appendix was designed slightly sloping to allow the water to drain, synthesis and reinterpretation of the floor on which the clothes were beaten. A formal reference that today serves as a comfortable and deep shelf to support the objects that live around the world of wellness.

Further reference to the past is the long wooden shelf natural ideally designed for soap and sponge. Cristalplant Biobased plays a decisive role in the project as it allows to easily integrate and consistent body tub with the table top. The candor typical of this material goes well with the idea of ​​clean that the designers wanted to convey. 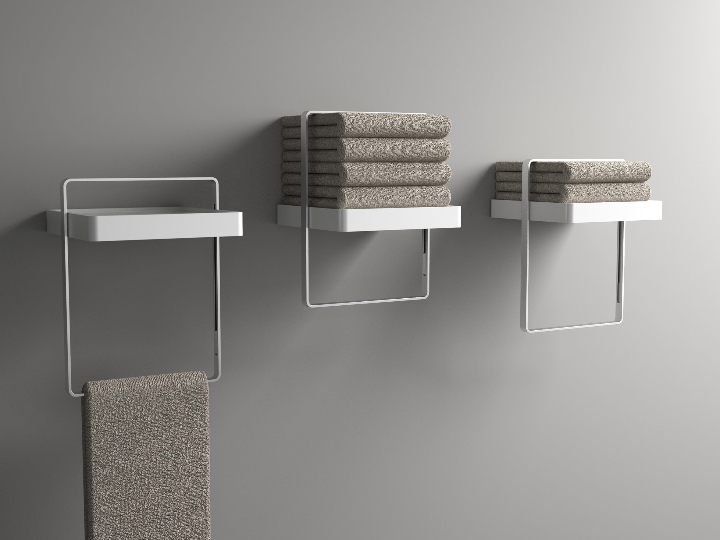 The American Cory Grosser on the other hand, it won first place in the bathroom accessories category, a position reached thanks to the “Slide Towel Shelf” project. Cory Grosser was born in Rochester - NY - and graduated in Architecture from the State University of New York, based in Buffalo, and in Industrial Design from the Art Center College of Design. Her work spans several disciplines including furniture, product design and textile design, brand strategy and architecture. Grosser is also a faculty member of the Art Center College of Design in Pasadena, California.

“Slide Towel Shelf” is a product that combines a shelf and a towel holder, perfect for a bathroom with a minimal taste.

In its simplicity "Slide Towel Shelf" creates a composition on the walls that makes you think of contemporary art. Its unique design allows folded towels to be displayed in the upper space and hung underneath after use. All this is possible thanks to a ring made of finely crafted aluminum, which can be moved as needed and which acts as a visual frame for the composition.

In aesthetic terms, the project is distinguished by a pure logic that emerges from the continuous lines and fluid surfaces: in addition to the clean design, the practicality of use and the uniqueness of the material with which it is made is immediately evident. Cristalplant Biobased.

Domenico Orefice e Michela Benaglia instead they received the special mention of the jury with “Renaissance Retro Contemporary Aesthetic”.
The winning projects and the words were presented in preview at the Salone del Mobile in Milan 2014.

“Canal Grande” and “Slide Towel Shelf” will become part of the Agape catalog from 2015.