Water Design 2015, the appointment with design dedicated to water, hosted in the marvelous setting of the Castello Sforzesco and in the best showrooms in the city, moves to Milan on the occasion of the Expo.

Now in its fifth edition, Water Design from 2 to 11 October brings the projects and installations of the best international designers and architects to the heart of the city of Milan and opens the doors of the showrooms of the main companies in the sector, with the aim of promoting and communicating design to an increasingly wider audience of professionals, operators and enthusiasts. In conjunction with the Water Festival, the biennial event created to promote and debate the major issues related to the availability, distribution and correct use of water.

The Parade Ground, The main court Castello Sforzesco, will host the important Water Festival, while the Rocchetta courtyard and Ducal Court will be the setting for the installations of Water Design 2015 and will host, respectively, the two research themes of this edition. The first, water as an asset to be protected from waste for a more conscious and sustainable use and, the second, water as a source of well-being for the body and mind.

Two very topical issues that invite us to reflect on the theme of water as a source of life and of which we must reduce waste, but also the value of the project as a qualifying act to give quality to the built space: a symbolic message rich in contents to stimulate the public to reflect on the value of what surrounds us both from the point of view of the natural and artificial world.

The beautiful Ducal Court, with its large central pool, the garden and the porch in the background, refers in a spontaneous and almost natural way to a situation of relaxation and pleasure for the body and mind, it will be here that Antonio Citterio and Patricia Viel they will create their installation: a design intervention that will have to tell the relationship between water and well-being, a contemporary interpretation that knows how to dialogue with the architecture of the past.

The Rocchetta courtyard will instead be dedicated to the theme of living and everyday life, emphasizing the importance of water as a source of life and a resource to be protected.

Three different housing suggestions, made by Piero Lissoni, Ferruccio Laviani e Patricia Urquiola, will raise public awareness by showing how through an alternative way of thinking, designing and building the inhabited space, it is possible not to waste the water we consume every day.

The three installations will be related to each other through a large garden, created by Green Italy Network, capable of regenerating waste water, thus avoiding waste and recovering over 70% of the water used.

The installations of the Castle will be the starting point to deepen the stimuli received and start exploring the path in the city through the showrooms of the best companies in the sector where every day of the event it will be possible to discover and touch the products and design objects, the innovations and research related to the theme of water. 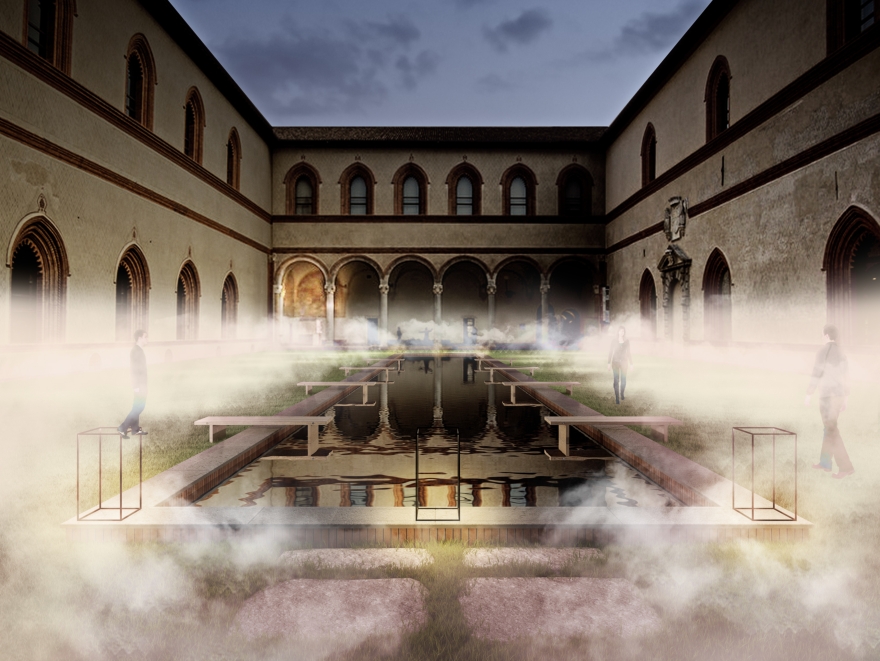 Antonio Citterio and Patricia Viel, Clear Sweet Fresh Water, Water Design 2015
“A body of water that alludes to an immeasurable depth returns the cropped image of the sixteenth-century court. The atomized water cancels the boundaries of real space in the vapor. The contrast between the clear reflection of the motionless surface and the unfocused background of the gaze reconstructs the dreamy state of half-sleep. Under the portico, the surreal fresco floats in the half-light. ”! 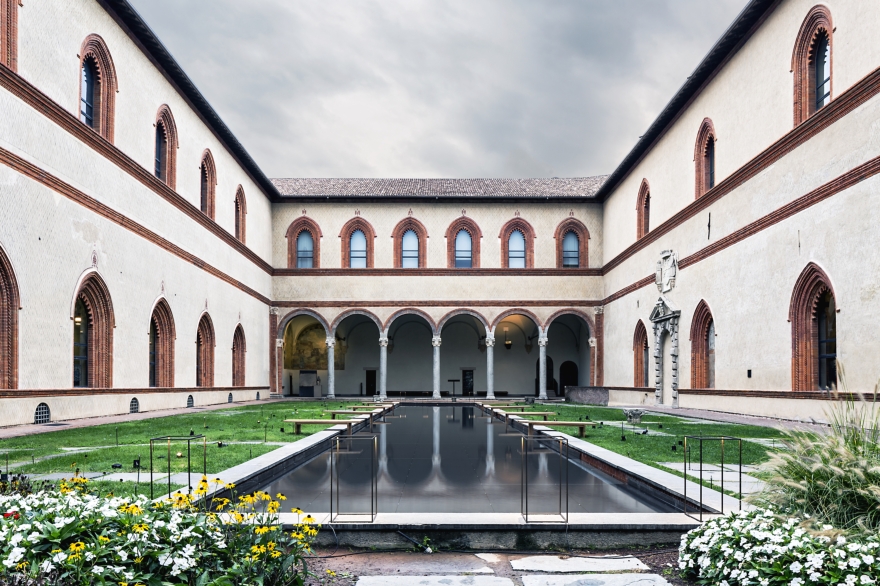 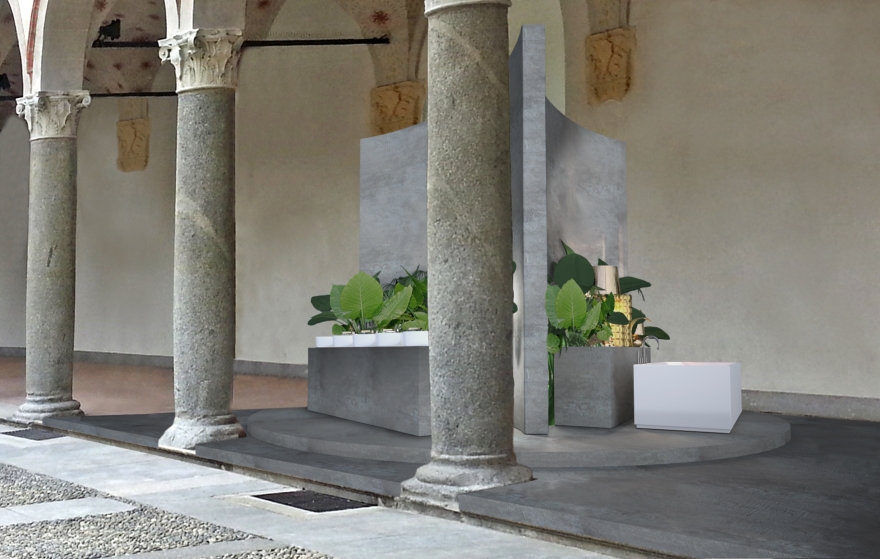 Glam Recycling, Ferruccio Laviani, Water Design 2015
“Glam Recyling is my personal interpretation of the concept of reuse and less waste of water, in a project that is less“ technical ”and aesthetically more intriguing. We have thought of a system in which the water used for the shower or from the sink can be recovered for the toilet drains or to irrigate plants and flowers through plant species with decontaminating properties. The bathroom thus becomes, in addition to an articulated and pleasant space, not only a functional area but also one of the parts of our home capable of making an active contribution to the balance of the ecosystem, avoiding waste as much as possible and remaining respectful of the environment ". 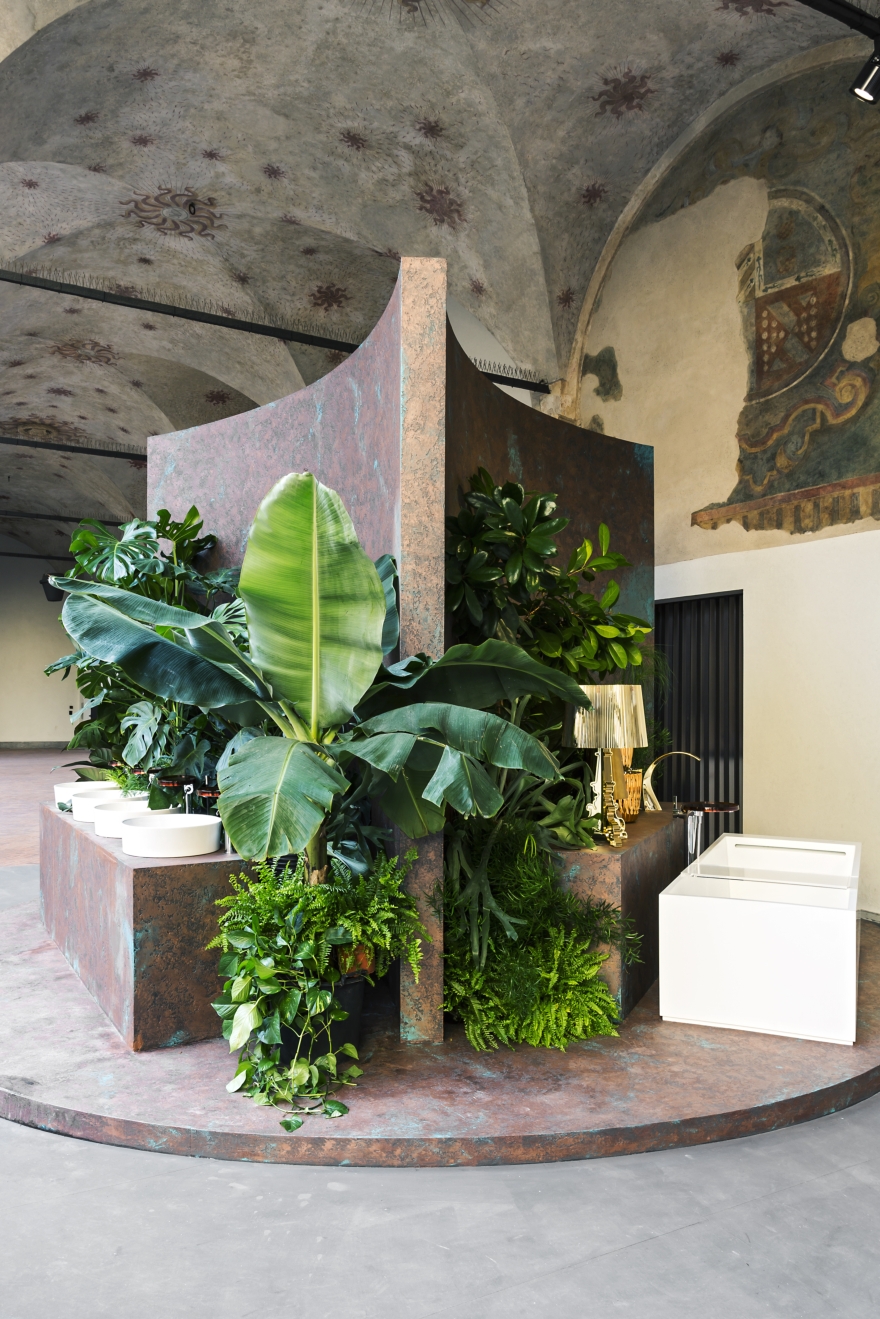 casAcqua, Patricia Urquiola, Water Design 2015.
An installation that highlights the importance of sustainable use of water through a network of pipes and circuits, developed in environments ranging to raise awareness of the impact that the actions of the newspaper have on the environment. Patricia works on both domestic environments that require a greater use of water, the kitchen and the bathroom, creating a circuit that shows how it is first used and then reclaimed. 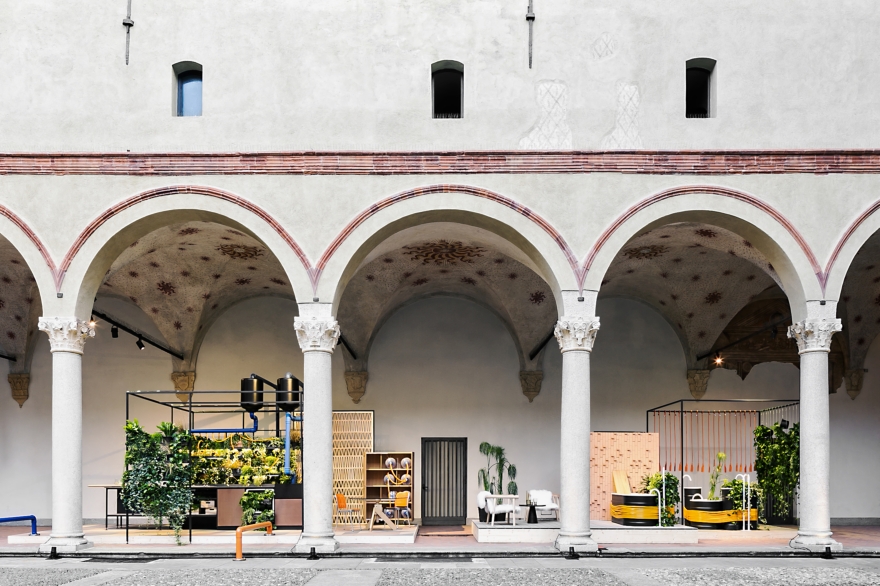 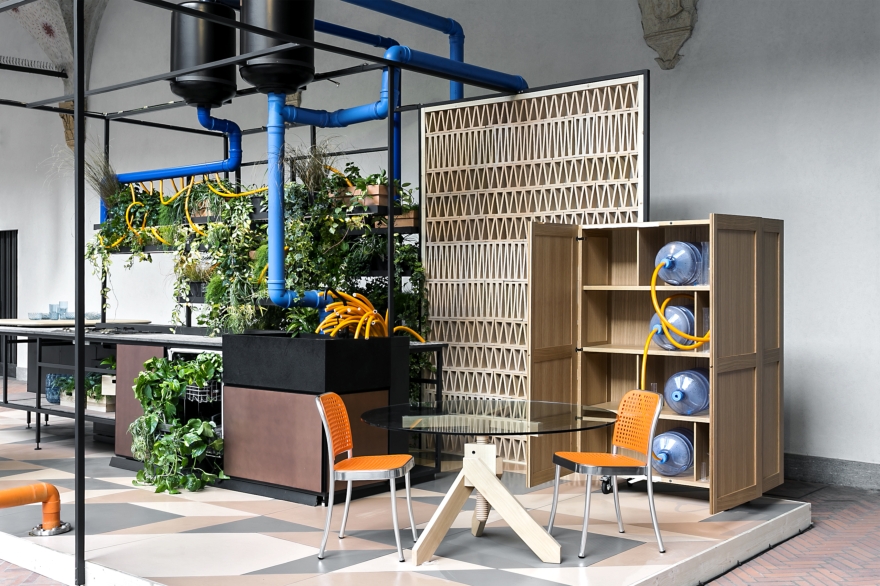 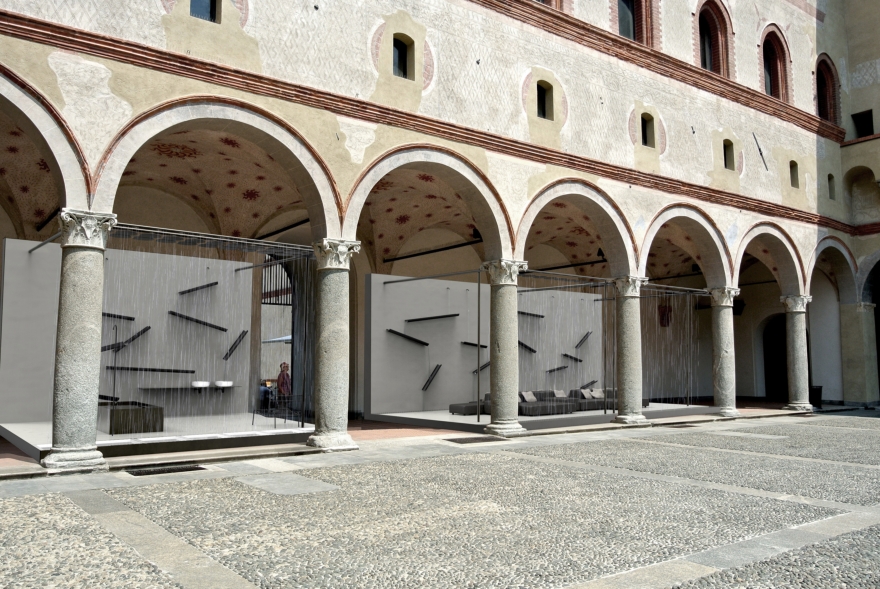 WATERWAY, Piero Lissoni, Water Design 2015
"I tried to draw the intelligence water, able to move, able to play, able to infiltrate and above all always able to get out of labyrinths." 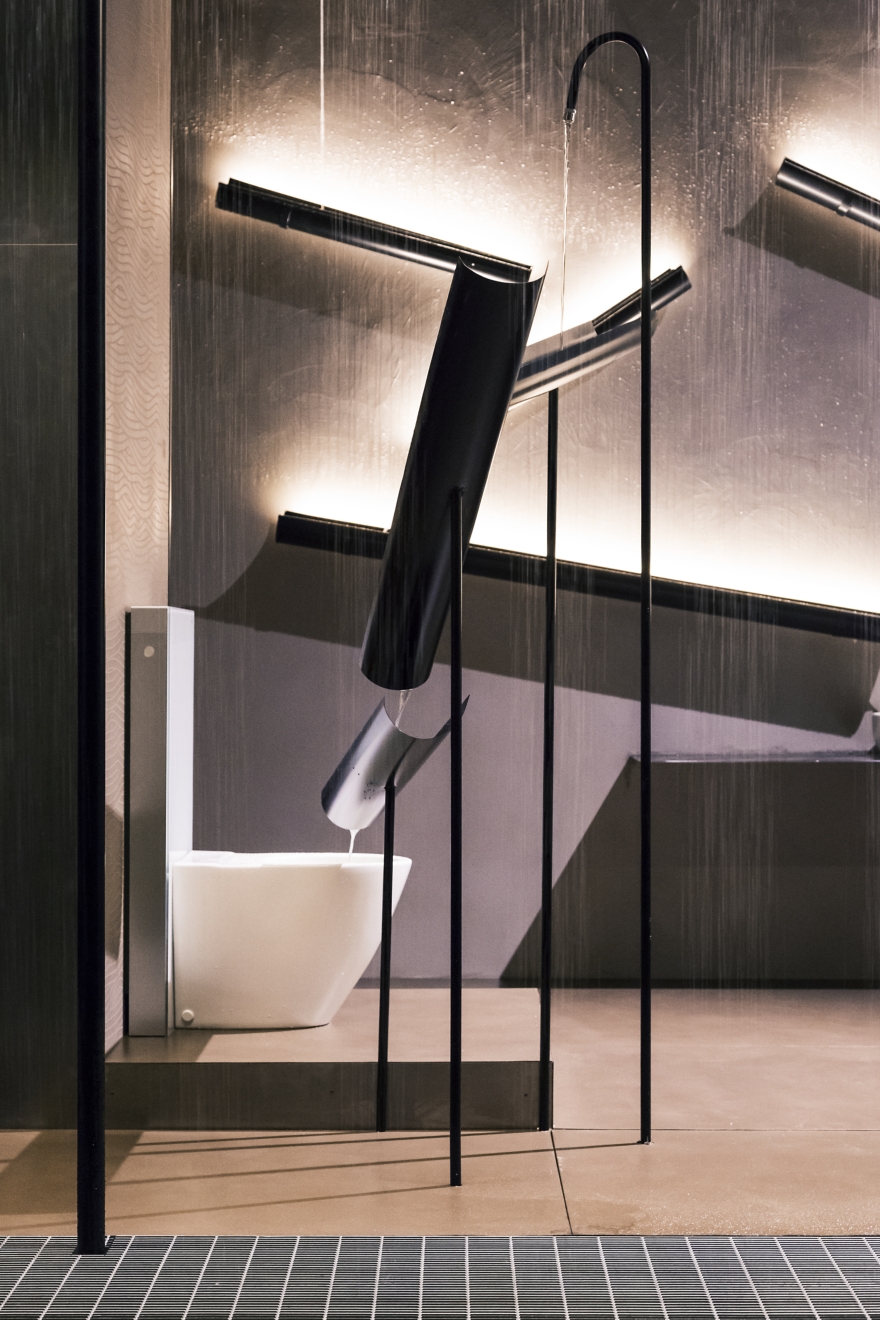 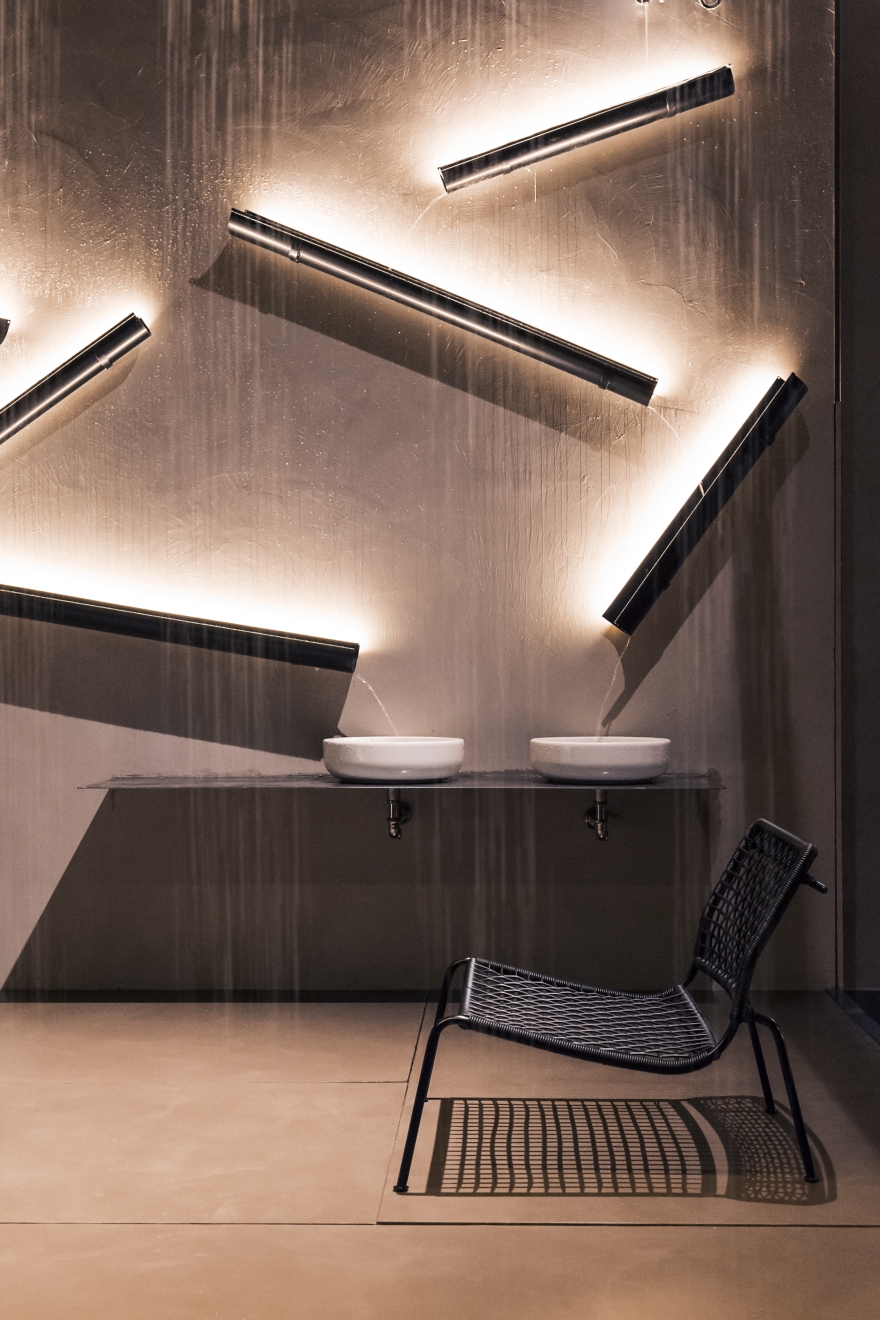 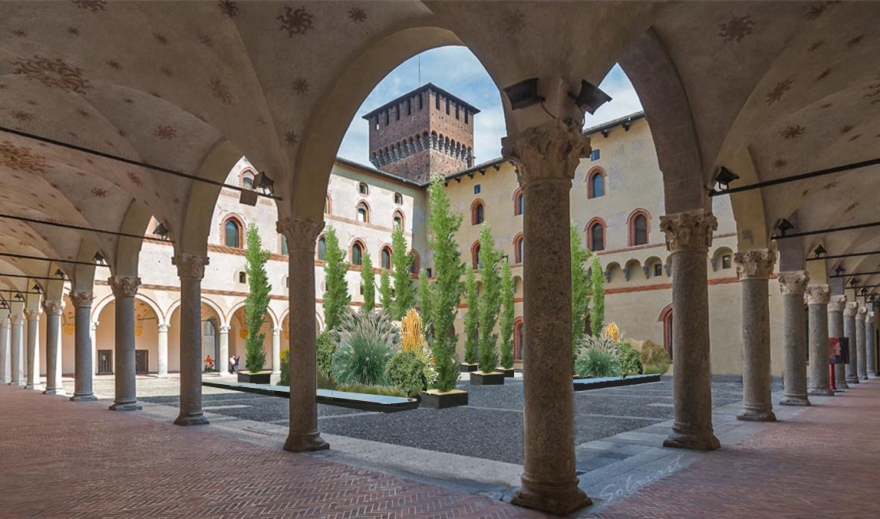 Water Garden, Italy Green Network, Water Design 2015.
“The giardinofitodepurante wants to symbolically represent what it is possible to do to recover the water we throw away every day. The garden collects domestic water, both the black ones of the toilets and the soapy ones of the kitchen and bathroom, and thanks to the phyto-purifying properties of the elements that compose it, it becomes a 'biological filter' that returns purified water for all those uses in which no water is needed drinking. In the Cortile della Rocchetta pipes of different colors connect the installations to the central garden: the orange and gray ones are for the used water that goes towards the garden, the blue ones for the 'regenerated' waters ”.