Next Cabane is the story of the shape of a folding wooden cabin. Small temporary spaces where we can set our boundaries, seek refuge or simply live a different life by rediscovering the quality and simplicity of things. Personal, intimate havens in harmony with the surrounding environment, they reflect on themes such as work, pop-up culture, loneliness, games. Living in an alternative way and with more awareness, where design is at the service of the search for materials, shapes and structures.

The concept Next Cabane has its origins in a found object, with very particular properties. It's a collapsible wooden structure, which used to be in the darkest corner of an antiques market in the north of Scotland. The origin of this structure is not known, but it probably had a previous life as a fishing tent. Perhaps it was opened on a river bank and, with the addition of a canvas, used as a shelter by fishermen. Whether this speculation is true or not, we know it is now out of order.

The designers Fabrica they were inspired to re-live this amazing structure, examining its particular qualities and re-interpreting them for contemporary contexts. Basically the structure is a mobile chamber that can be carried from one place to another. 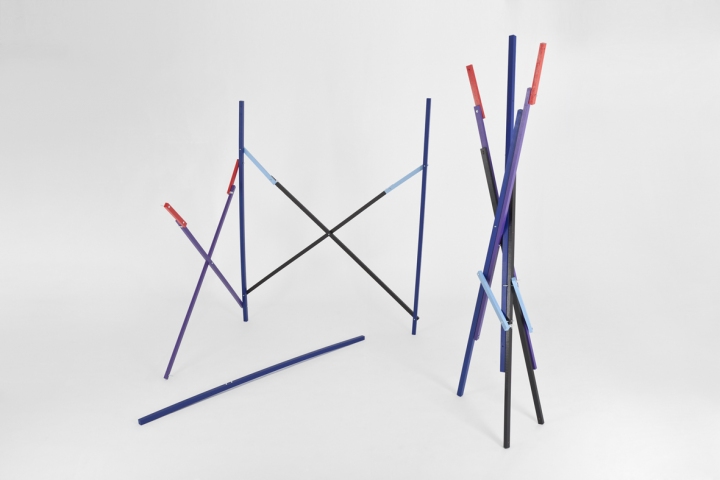 ROD, by Amaury POUDRAY & BRIAN WOOD (2011) The simple folded structure has been deconstructed to create new functional objects and sculptural elements. Each component has been colored to be recognized and to highlight its value. The transformation pays tribute to the purity of the initial volume. 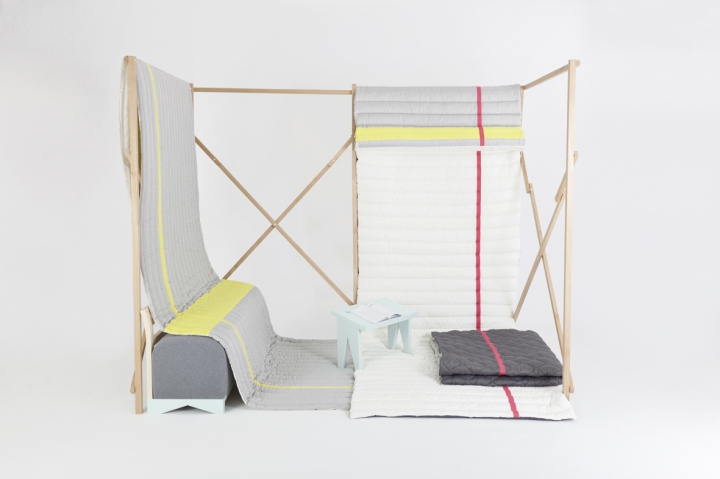 FOLD SOFT MARIE DESSUANT & MARGAUX KELLER (2011) Fold Soft is a temporary space that invites users to take some time for themselves. Duvets, a reading table, a low bench and a lamp make up the mobile / hybrid space. The harmony of colors emphasizes this soft and silent atmosphere. 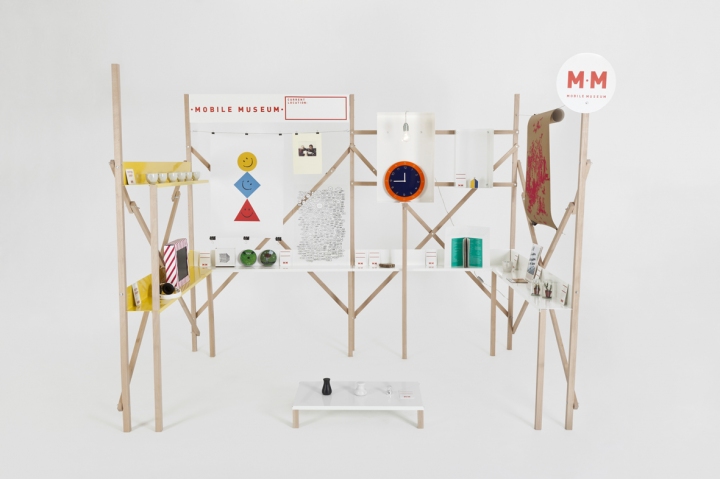 MOBILE MUSEUM by Philip BONE & Dean Brown (2011). The MOBILE MUSEUM is a traveling museum, with content provided by people from all over the world (including you). We welcome contributions from different backgrounds. Whether you are an artist, designer, illustrator, photographer or other professional. Unlike a conventional museum, the collection is constantly evolving, it evolves according to its position, with the same position dictating the theme. The first Mobile Museum exhibition took place during the Salone del Mobile 2011, under the theme of “Family”. The second MM exhibition was staged at the Victoria and Albert Museum. Most recently it was hosted in Brussels as part of DesignSeptember 2011. 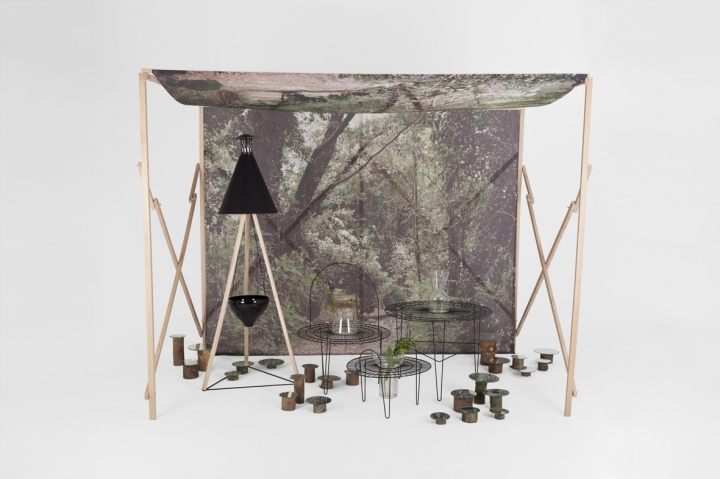 WHATERING THE STORM by CARRETTA VALENTINA & GUSTAVO MILLON (2011). A space for relaxation, surrounded by a landscape recently shaped by a violent storm. A space where you can enjoy reflections of the rain puddles and light a bonfire, without the risk of getting wet or burned. An ironic statement that shows how man can never control nature ... 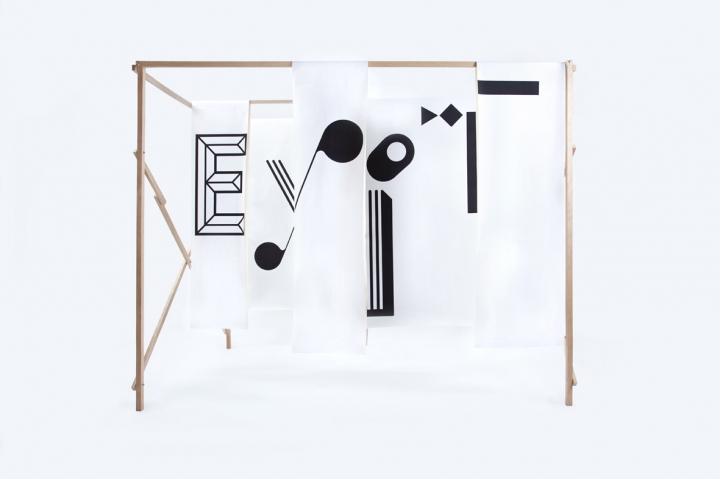 MAZE by Catarina Carreiras (2011). A typographic labyrinth is the perfect excuse to hide from the rest of the world and be accepted by the wisdom of words. The font was made so that each letter tells its secret, in a story of shapes, volumes, lines and colors. With paper walls, "Maze" is a "Cabane" that can move from time to time, depending on what you mean. 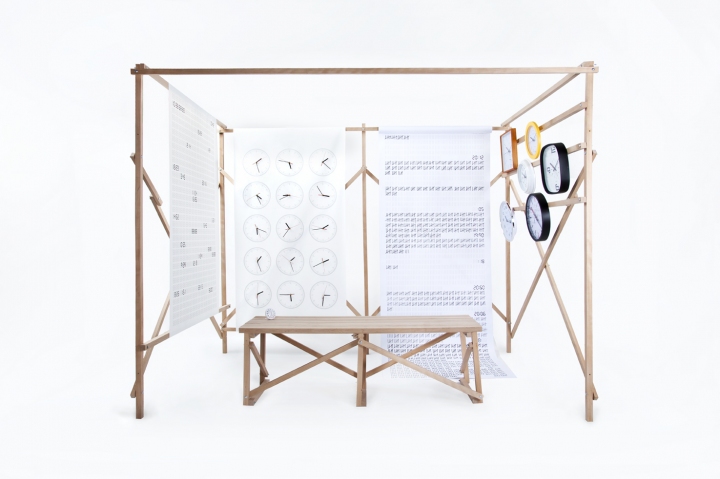 WAITING ROOM by Minns KIRSTY (2011). The 'Waiting Room' is like living time, to make people feel aware that time passes. It is a place to stop and appreciate these minutes, hours and seconds. The “Cabane” invites the user to try to see an alternative way of looking at the moment. The very nature of the temporality of the “Cabane” also offers another level to the waiting room. The intention is to try to force viewers to come face to face with the passage of time, and to give birth to a reflection on how to recognize time to create greater awareness of one's existence. 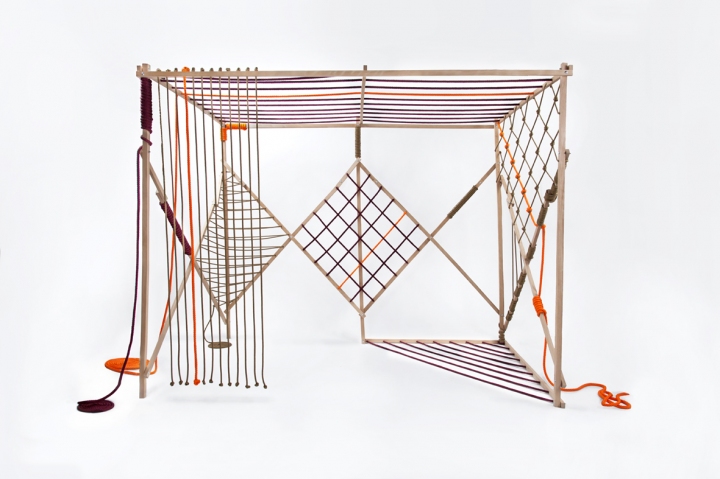 CABANE NET GIORGIA ZANELLATO (2011). The initial inspiration for the “Cabane” was the lightness and portability of the wooden structure. The structure is meant to be used originally by Scottish fishermen, the rope which offers a direct reference to this previous life, completes the wooden construction. The nets are built through the support of the structure, which in turn is reinforced by the nets. In this way a space is created in which the rope gives different proposals and possibilities of spaces and uses. An environment is defined that maintains the idea of ​​a temporary space and preserves the origin of the object itself.