Cuckoo clocks and Projects by the Milan Design Week 2015 it has been modified: 2015-05-06 di Benedict Flowers

The new watches and cuckoo by projects recently presented at the Milan Design Week 2015.

Bobitic, floor cuckoo, is an important and elegant 'presence', a point of reference in the room, a friend who marks the days giving originality and style to the home.

The idea was born to the designer Manuel Barbieri who, thinking back to his companion in adventures when he was a child, the soft toy Bobi, wanted to transfer this reassuring and at the same time discreet presence into an object with a contemporary design that goes beyond its primary function .

Bobitic is made of wood painted in shades Smoked Oak in the front and rear; the rest of the structure is orange / melon. At the top there is the cuckoo in which the hands are placed.

Quartz movement battery with a light sensor that automatically stops ringing in the dark. 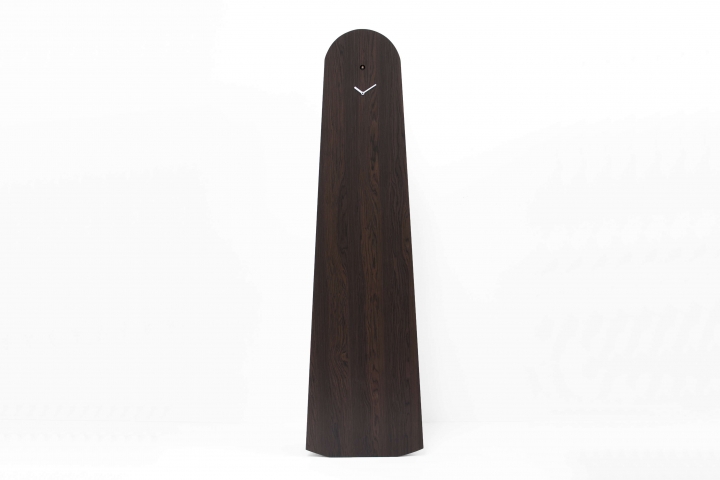 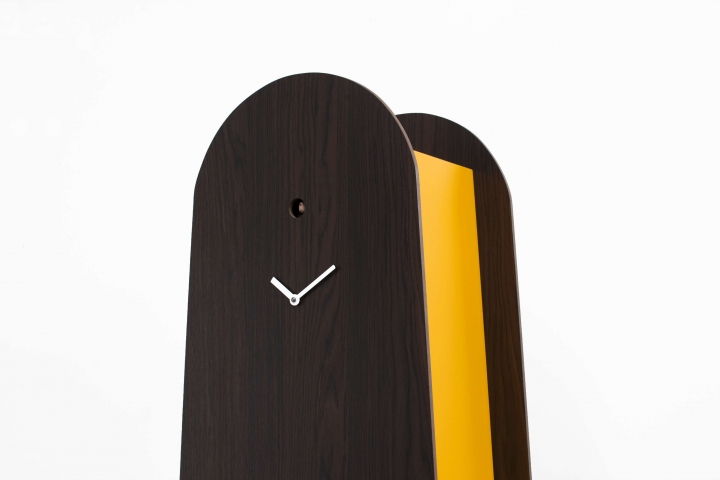 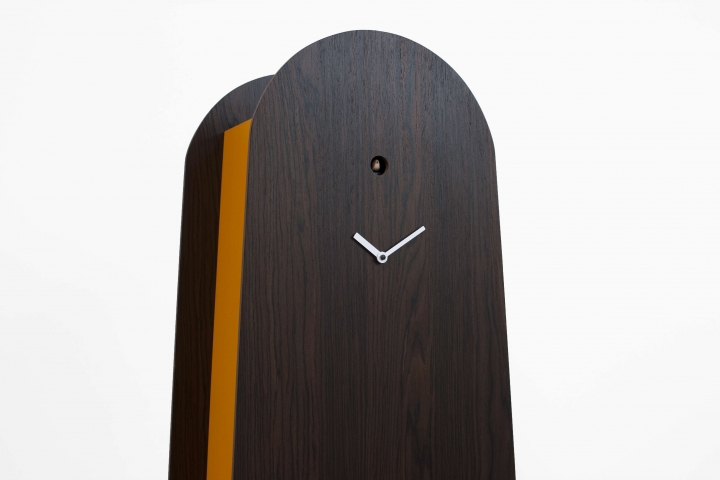 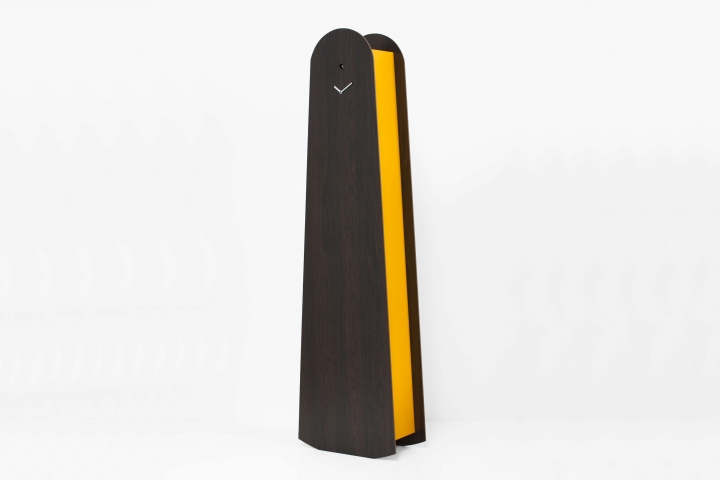 The castles have distinctive features that differentiate them at first sight from all other architectural structures; among the various Manuel Barbieri was attracted by the battlements, ever-present elements that recall the era of construction or are the symbol of the family that commissioned the building.

The battlements thus reveal the time, the historical period of the castle which encloses many meanings and mysteries within its thick walls. From the imagination and the passion of the designer for these ancient places, Merlock is born, a floor clock that shows current ancient symbols.

An important piece of furniture and at the same time simple and ideal for various environments and styles. Merlock is made of wood painted in antique gray in the front and back while the rest of the structure is white.

The hands are positioned on the front and an insert has been designed, with the same shape as the entire object, which encloses the pendulum which, like the hands, is white in color. 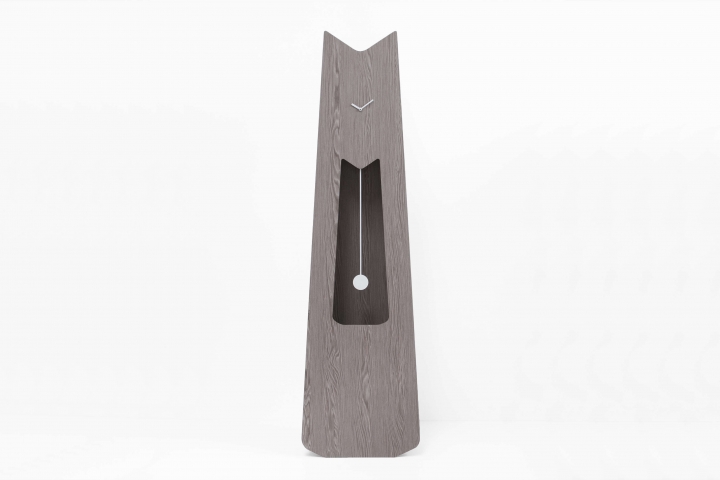 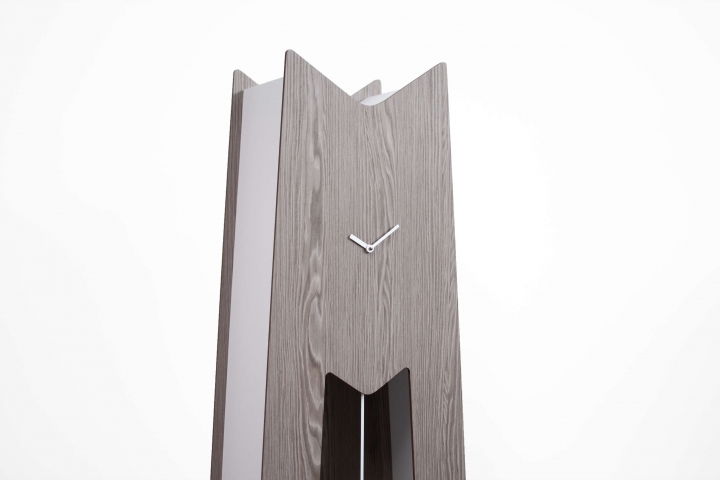 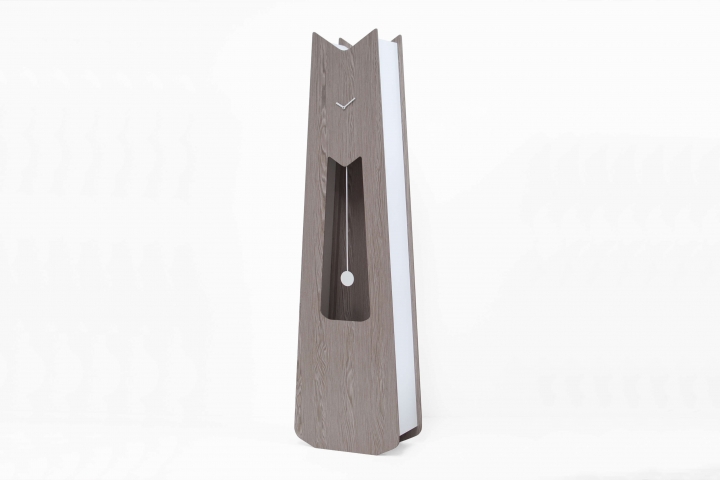 It all started from listening to Debussy's 'Clair de lune', from the charm of music and moonlight. The Mootime wall cuckoo takes up its poetry to bring it into the home. The faint light, loneliness and serenity of a 'midsummer' night where emotion can become an ironic and funny image: the relaxed cat observes the canary entering and exiting the cage
open and everything is strangely quiet.

The Cuckoo wall has a structure in wood painted black as a backdrop to white graphic style simple and deliberately childish, refined and vintage components.

In fact, the moon is represented with simplicity seen from a round window where the cat rests and the hands of the clock are contained; below we find the open cage that contains the cuckoo that every hour will come out challenging the cat; on the base a linear decoration and a vase with a plant. Concludes the total black pendant.
Quartz movement battery with a light sensor that automatically stops ringing in the dark. 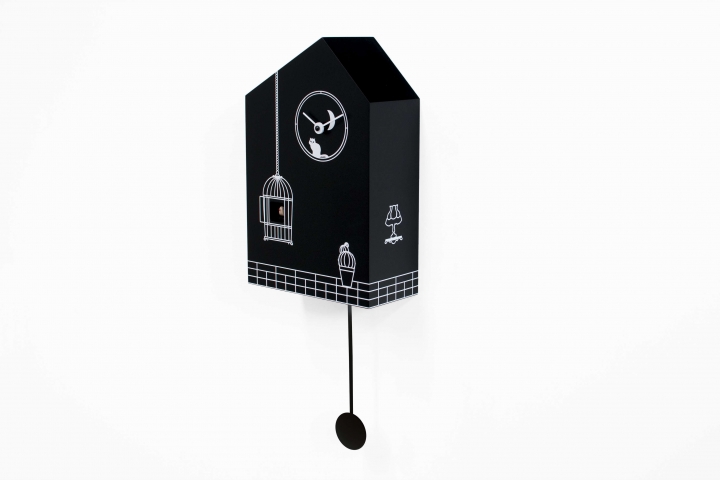 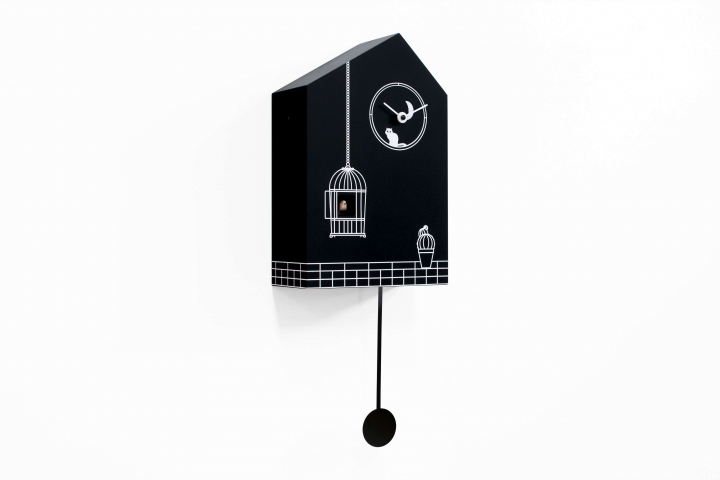 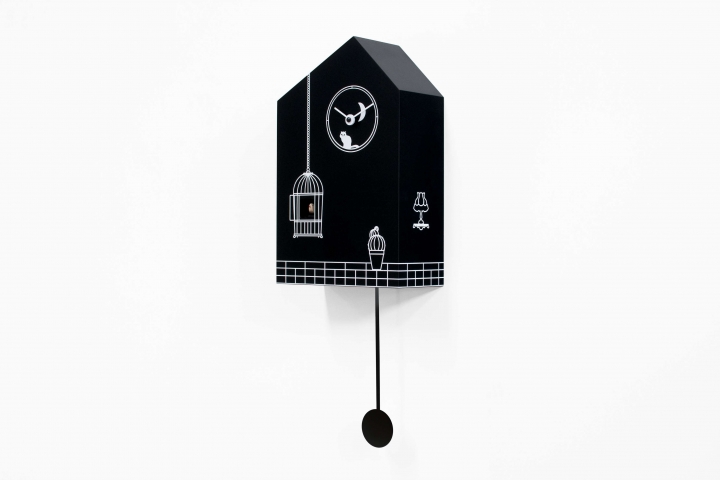 Shapes and colors are always the protagonists of the novelties but this time, the young talent Gianluca Minchillo, has created a watch that would give the deserved space to design, to graphics. Referring to the decorations 'of the past', used in coatings, flooring and also in fabrics, he decided to create an object with a strong character that dresses the walls by playing mainly on contrasts.

Have been born two versions: Pattern and Partner, watches in painted wood. Partner develops horizontally at the ends with two rectangles of different sizes with the same graphics, the center a total black box with white needles.
Pattern, more important and particular, is, instead, an explosion of four squares with different designs around the black cubic volume of the clock.

Both are available in white and black, dove gray and yellow. 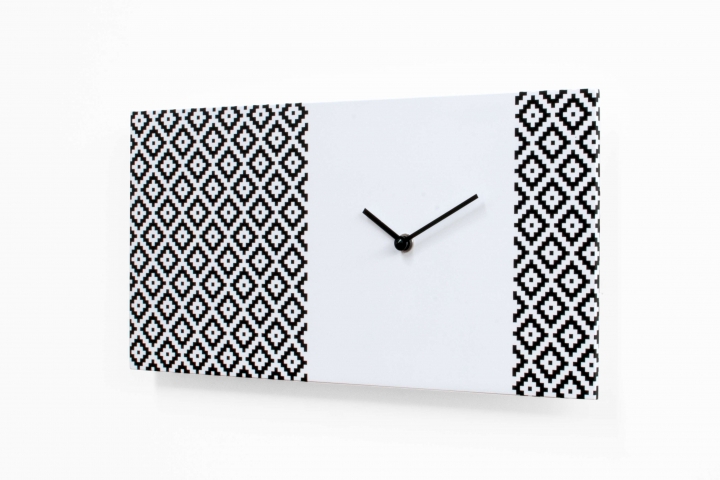 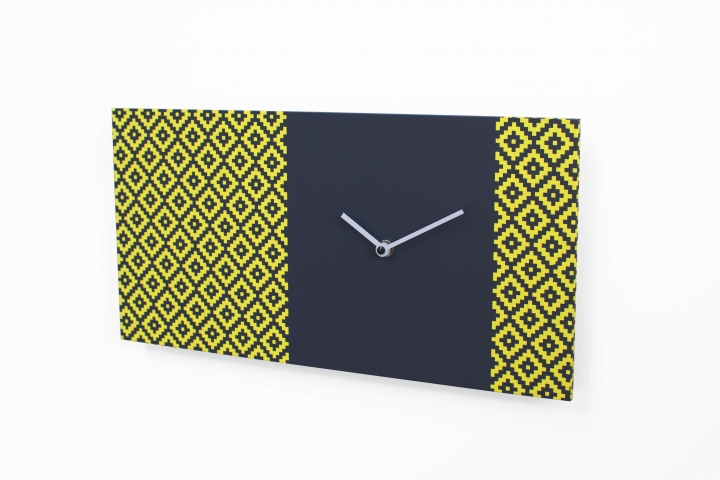 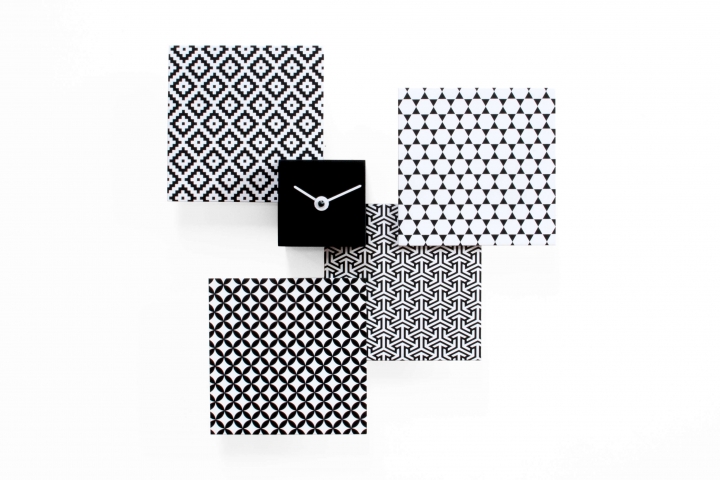 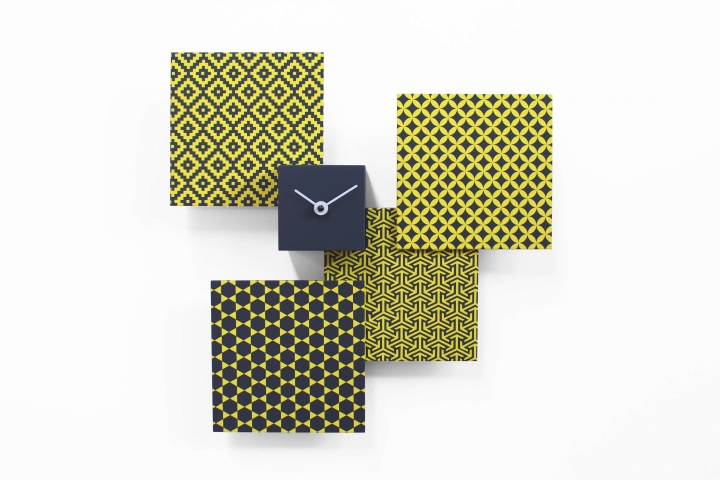 Over the years, Progetti has repeatedly paid tribute to big cities, places and symbols of the world, for example with the Time Travel, Skyline, Souvenir and Hindia watches and with the Ku Ku Kina and Burano cuckoos. We now present the Sheikh cuckoo designed by Antonio Farina, which represents, in a contemporary guise, an ancient culture and a particular architectural style with the typical domes supported by a more linear structure.

The cuckoo, painted wood, has a cuboid with a base, in relief, the forms of the mosque where the hands are placed and the cuckoo. Above this volume rests the characteristic golden dome.

Sheikh is available in the table or wall version, in white with dome and gold details, with or without Greek, or with black structure and dome, hands and other bronze details.

Quartz movement battery with a light sensor that automatically stops ringing in the dark. 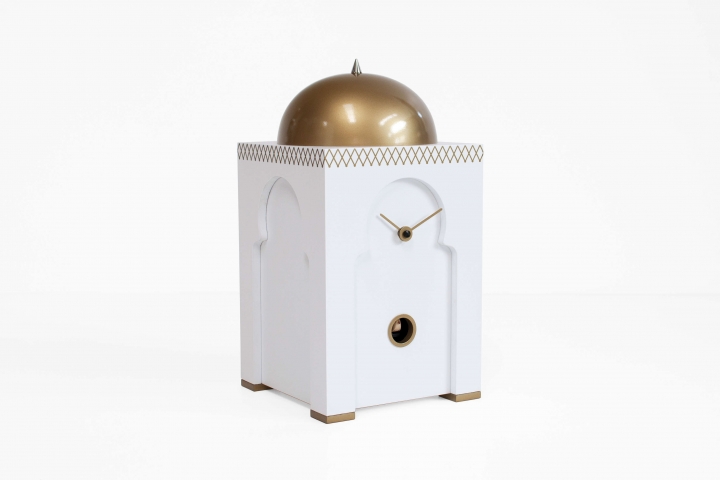 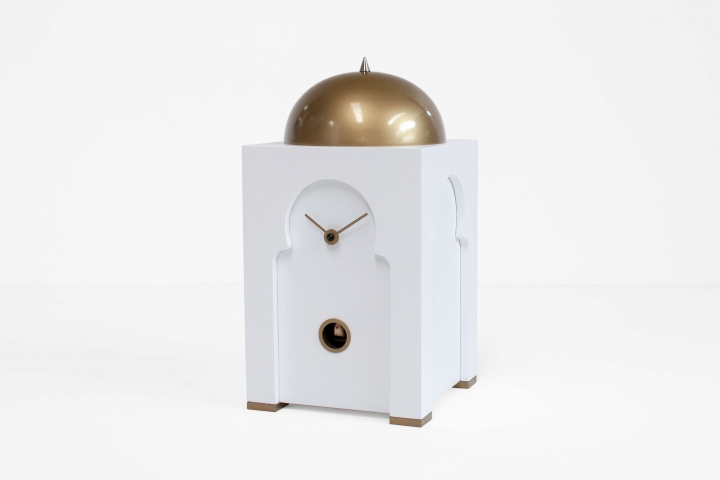 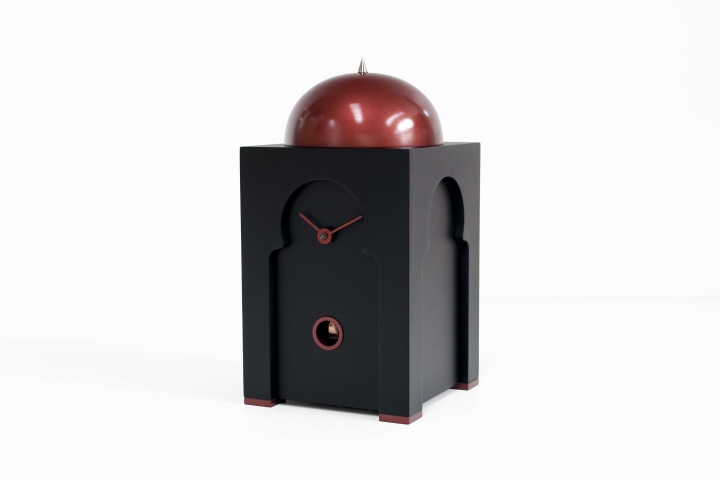