Studiòvo / suspension Armille for Martinelli light it has been modified: 2013-02-07 di Benedict Flowers

Looking to the past, recovering the purity and authenticity of primitive forms without giving up the richness of contents and meanings hidden in every object, in every place, in every story. It is precisely from the pages of ancient history manuals that the designers of Studiòvo Marco Vincenzi and Andrea Caturegli, in collaboration with the architect Paul Frello, Drew to form, and name, to Armille, scenic and ethereal suspension interiors made for Lucca Martinelli Luce.

Its etymology, from the Latin armus, that is òmero (the bone of the upper part of the arm), leads us directly to ancient Rome, an era of undisputed prosperity and strength in which the brave soldiers of the city were on the scene. imperial army, fighters in tumultuous battles. On the wrist, but also on the arms and ankles they wore "le armille", that is, concentric bracelets of various materials (such as rod metal, metal with detached elements, ivory, bone, amber, etc. ), symbols of brilliant dexterity and bursting physicality.

From the circular shape of these precious jewels, today a suspension with a high decorative charm is born, whose luminous intensity is equal to the power of its original etymological meaning. All this is possible thanks to the diffused light guaranteed by the white steel reflector open in its upper part and, at the same time, by the direct lighting of the satin opal methacrylate diffuser. 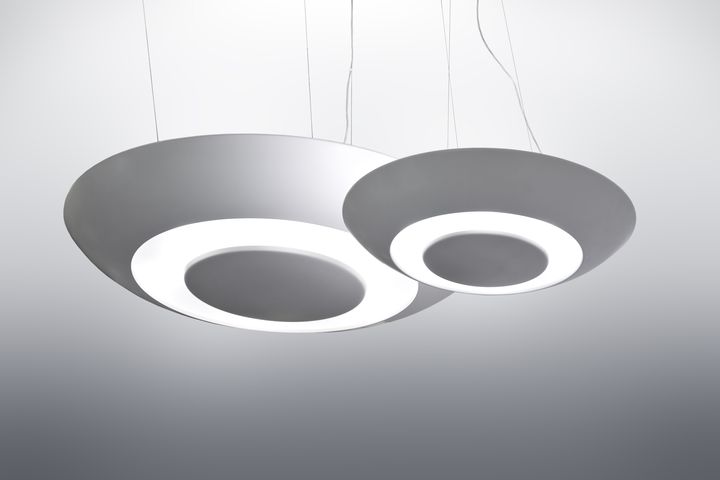 Armille sees everything, and illuminates everything. Like a pupil, a brilliant source of light, the suspension lamp by Studiòvo proves that it has masterfully learned its lesson - of history!