Nimbus Group interprets the era of light 2.0 with Force One and Office Air LED it has been modified: 2015-02-17 di Benedict Flowers

The new LED lamps Nimbus for offices and working environments are equipped with a series of technological functions, such as a capacitive command or a brightness sensor and a detector of intelligent presence.

The LED revolution opened a radically new perspective in the ancient world of lighting which, since the late nineteenth century, relied essentially on incandescent light bulbs to illuminate our nights.

Their rapid spread is based on the one hand on the growing lighting needs of the world population and on the other hand on the need to reduce emissions. Lighting today accounts for 20% of world energy consumption and 75% of the systems used are still inefficient. That 75% of traditional systems, if converted to LEDs, would consume 80% less energy.

Force One, and the Office Air LED desk and floor lamp, are new generation luminaires designed for the workplace - compact LED lamps with a discreet appearance.

Force one is the Nimbus Led floor lamp, with a slim and slender line, technologically advanced, designed for the work environment and whose name is freely inspired by the famous phrase from the Stars Wars movie: "May the Force be with you". 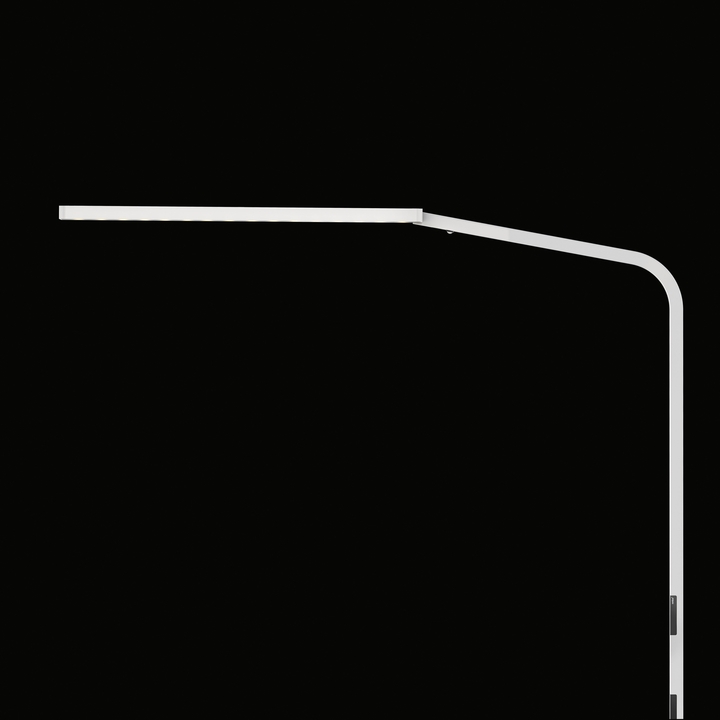 The lamp head is extremely flat, with a thickness of only 20 mm.
The base has a slightly more important aspect, in fact it houses the entire integrated control system, and it can be easily hidden under the desk top.

The lamp describes a wide arc, so that the light source reaches the center of the work station. Force One is also equipped with an additional indirect light source and disconnectable.

In the presence of adequate ambient light conditions, use in Power mode even allows you to avoid switching on additional lighting fixtures in the room. Force One is an efficient lone warrior, emitting up to 8.000 Lumens in Power mode.

The lamp is practical to use and intuitive, thanks to two capacitive switches integrated flush in the profile of the lamp, by means of which you can also activate the new light sensor and PDLS.next presence. 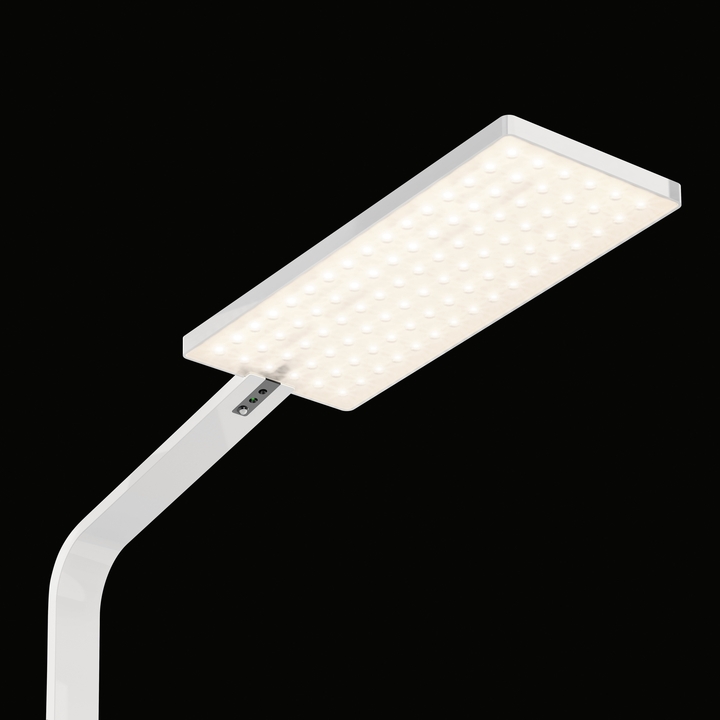 The project combines technological needs with ease of use. Rupert Kopp, designer of Force One, speaks of a “dynamic scene, but at the same time static and orderly in an office environment”. Nimbus founder and CEO Dietrich F. Brennenstuhl adds: “LED technology is perfect for concretely expressing our design idea: eliminating all that is superfluous and focusing on what is needed for a lamp to function properly”. Following this principle, the diffuser of all Nimbus LED lamps was further perfected, with its characteristic conical cavities, to obtain a low beam effect and direct the light beam. Force One is therefore equipped with a diffuser optimized for soft lighting, made of high-quality polycarbonate, which integrates harmoniously with the other components of the lamp.

Six years have now passed since the first generation of the Office Air lamp, developed in collaboration with the architect Behnisch - and even today this polished chrome free-standing and desk lamp is a true classic.

Despite the appearance that has remained unchanged over time, the new Office Air Led hides a completely renewed lighting project: new LED packages up to 8.690 lumens and an optimized electronic control device, make it one of the most efficient LED desk and floor lamps of its segment. 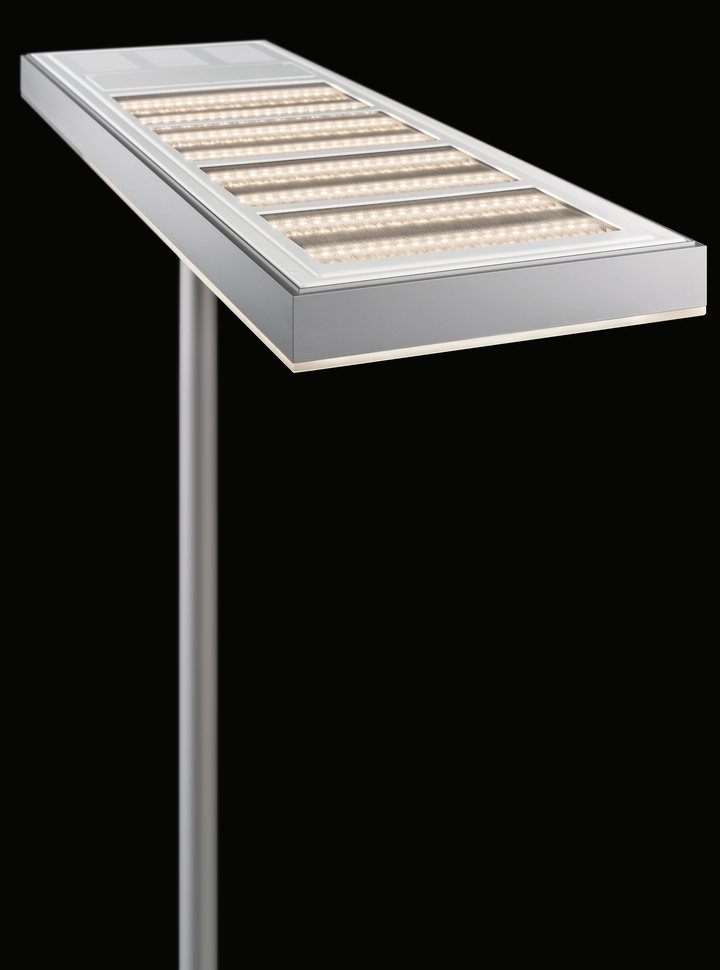 At the 2014 edition of the Light + Building Office Air LED was presented for the first time in Power mode: this means that, in the presence of adequate ambient light conditions, inserting the indirect light source to obtain global and soft lighting environment, you can avoid turning on additional lighting: the Office Air LED Power lamp ensures sufficient brightness.

Whatever the variant - stemmed, hanging or table special version for top USM Haller - the light of Office Air lamp can be used very efficiently: the direct and indirect light source can be turned on or off separately according necessità.Inoltre is adjustable and can be equipped with a light sensor and a presence detector (PDLS); when the workstation is temporarily abandoned, the lamp turns off and on again automatically. 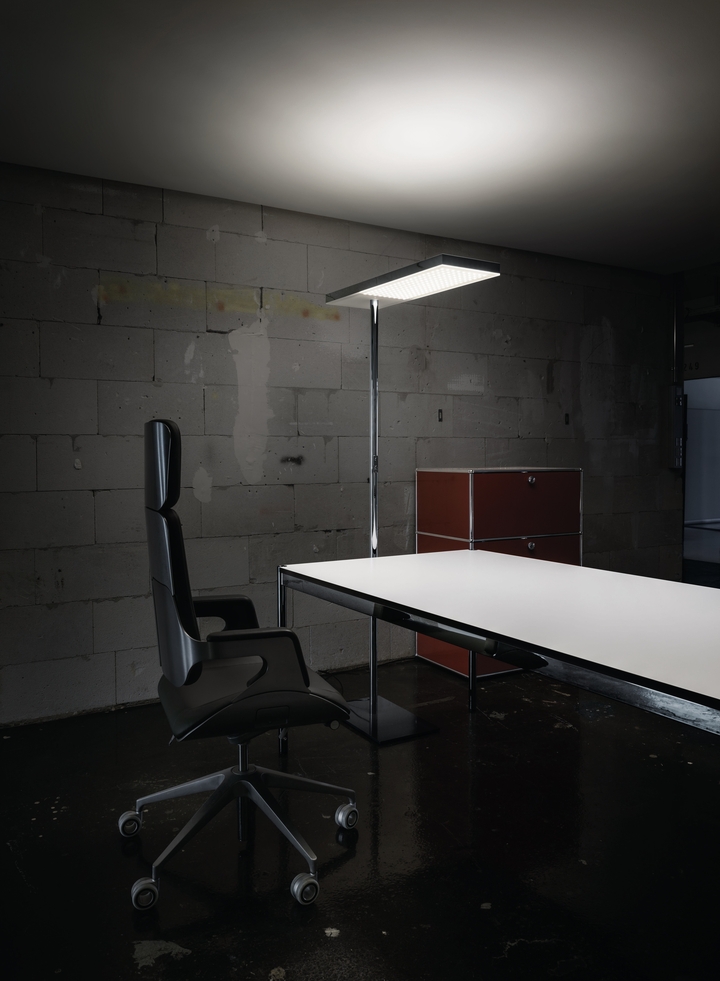 The sensor detects the brightness of the environment by continuously adjusting the intensity of the light, in order to obtain a constant degree of brightness. A smart and very powerful lamp equipped with a timeless beauty. “A manufacturer or designer always hopes to create a classic,” says Dietrich F. Brennenstuhl, founder of Nimbus and CEO of the company. And with Office Air Led Nimbus has succeeded in the enterprise.