Iittala The new collections for spring and summer 2014 it has been modified: 2020-04-23 di jessica zannori

The relaxing and evocative BLUE RAIN is the new nuance introduced by iittala for new collections of glass objects spring summer 2014.

TAIKA, the famous line to the table decorated with fairy-tale fantasies of Klaus Happaniemi is enriched with new products and decorative textiles;
The range of birds in glass collectibles BIRDS BY Toikka expands with new limited edition and numbered;
Kastehelmi, the line of accessories with the famous glass processing dewdrops 50esimo celebrates anniversary.

The new blue rain integrates the range of hues iittala inspired by nature, with intensity and tranquility. This intense color stimulates our thoughts and our were'nt, hue evokes the relaxed atmosphere of summer rain: the harmonious peace of a Scandinavian veranda surrounded by nature, under the soft patter of rain.

Glassware blue rain, beautifully complement the range of products in shades of blue, shades of current and very popular in interior design.

The Kivi votive and Kastehelmi filter beautifully blue light, while the cups Mari Bowl Kastehelmi are perfect for a dessert convivial.

As usual, this refined tone was also introduced in the most famous products of the range of Aalto vases. 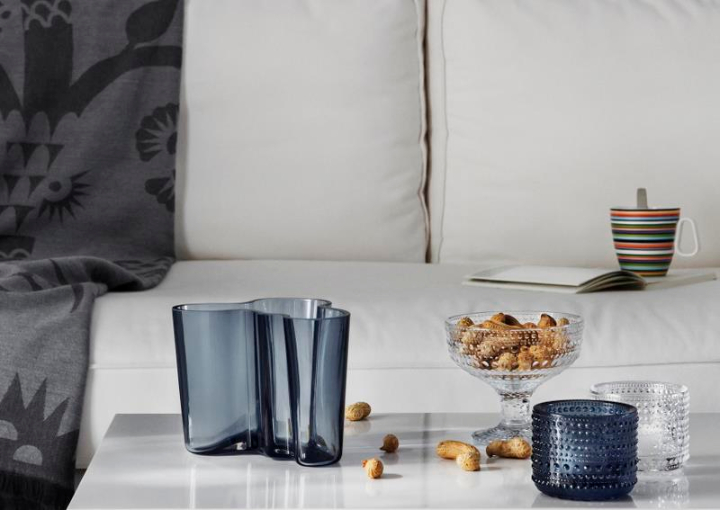 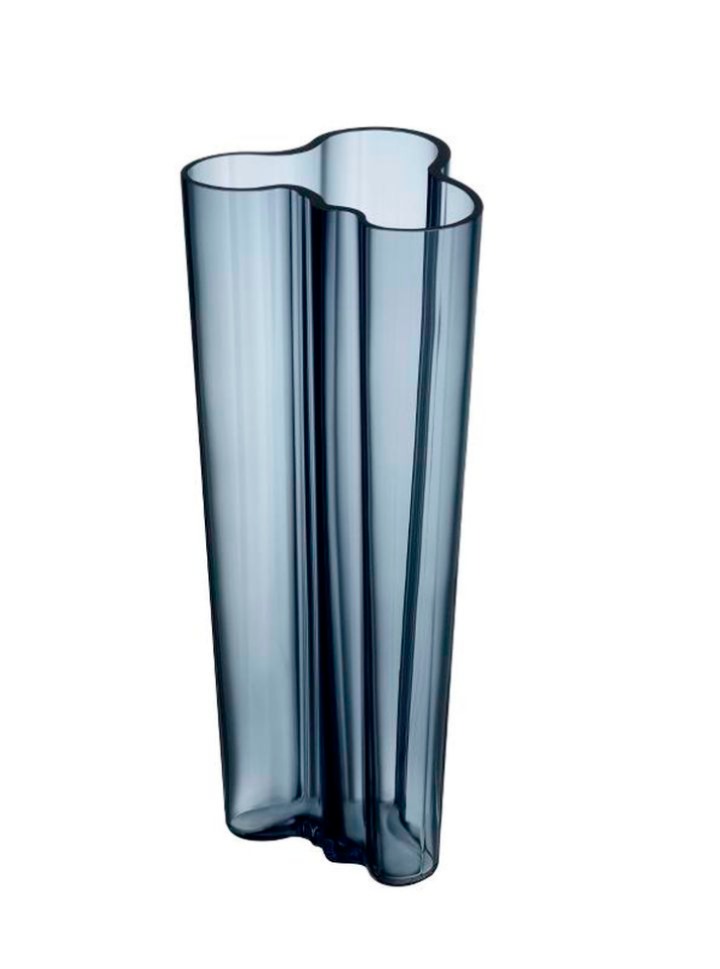 The famous line Taika takes a step forward. With the addition of new forms and materials, this collection proves more versatile than ever.
The famous animals drawn peep also on line products for the home interior.

Since its launch in 2007, Taika ('Magico' in Finnish) has established itself as one of iittala's most loved collections. The shapes of Professor Heikki Orvola provided the perfect basis for Klaus Haapaniemi's unique illustrations.

In the new pieces of the Taika line the shape follows the geometric lines, but a slight sense of softness has been added. Klaus Haapaniemi has renewed the characters. “The new items have the characters in the foreground. I wanted to play with them; for example, I depicted the fox curled up in a ball. "
Imagination, so used, gives a sense of lightness to the series. "I think the use of decorations depends on the shape of the object," says Haapaniemi.

"I was inspired compositions in Art Nouveau style, where form and decoration contrasts so perfect."
The Taika collection evolves to best meet the needs of the different food cultures. The new pieces include a bowl for sauces, a porcelain spoon, a serving platter and two new bowls. The Taika collection expands, now also including household products.
A cute owl, in fact, has landed on the new pillowcase in merino wool and on the blanket.

The new glass, also designed by Heikki Orvola, is a natural extension of the series. “It was quite clear that the motif was going to be engraved,” says Klaus Haapa-niemi. “It is a modern glass with a traditional processing; it is a very old technique for decorating glass. It is natural that the series continues to tell its story ”. The patterns and models of the Taika line are easy to combine, thanks to their versatility and the introduction of new materials ".

A flat 27 cm, an oval tray, a jug and a cloth were introduced in the range, with the fantasy original Taika. 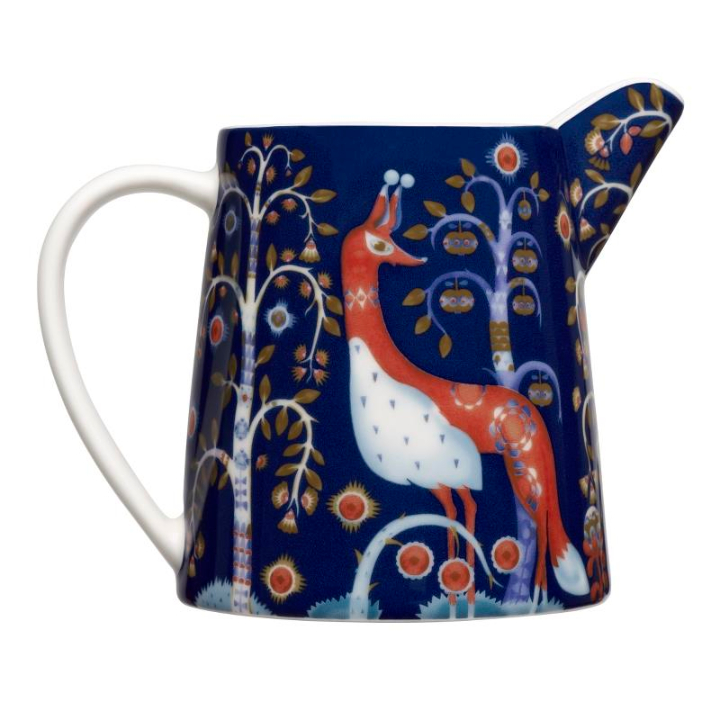 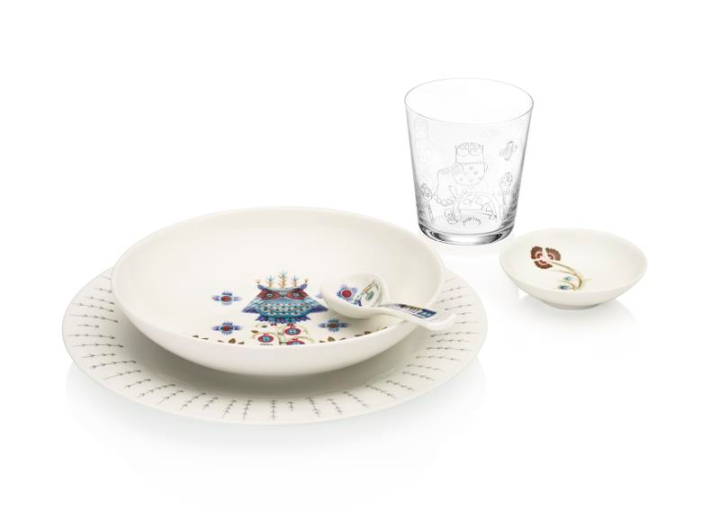 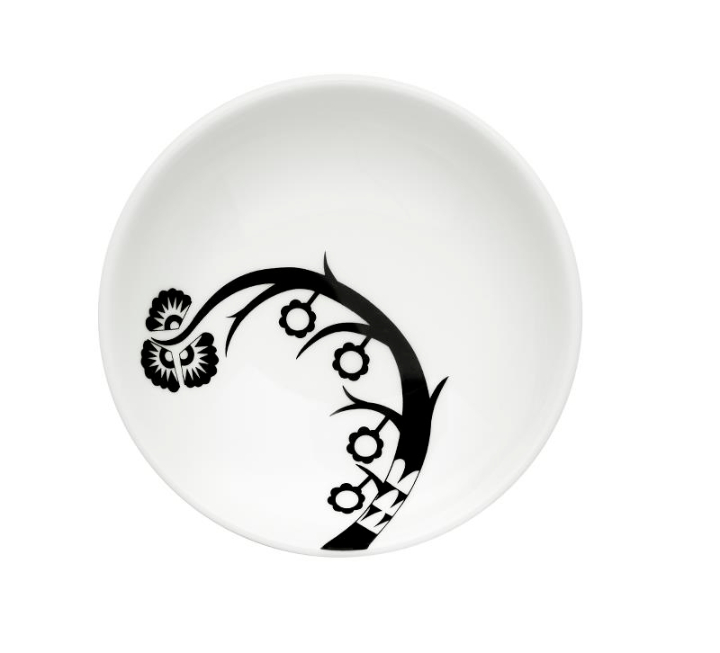 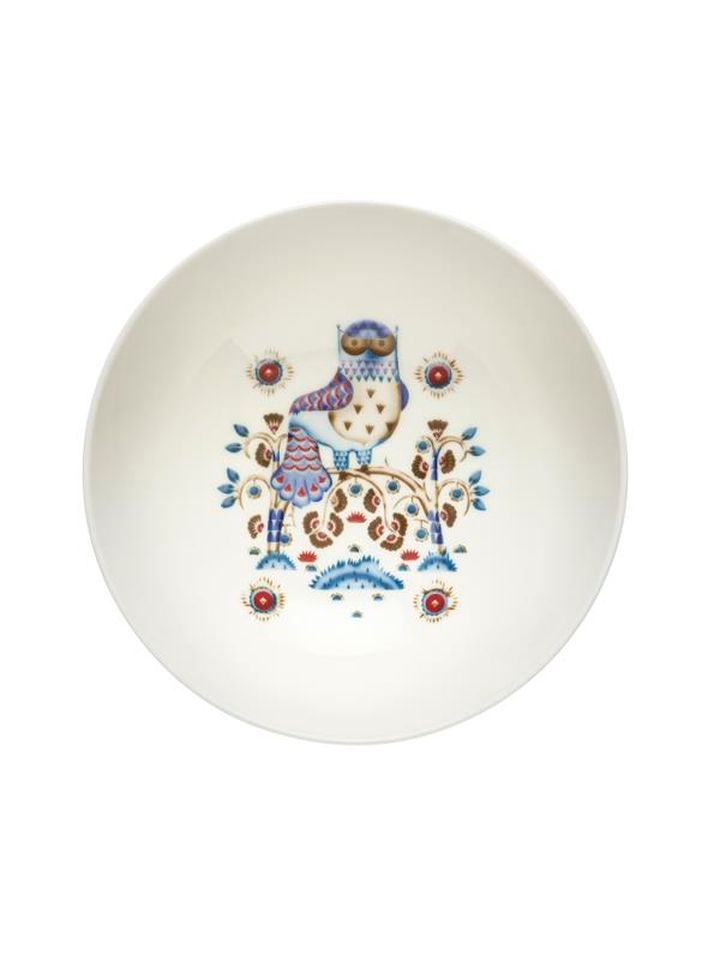 The creations of Oiva Toikka

The Alder thrush of Oiva Toikka can easily be spotted flying in Finnish forests, although the bird's annual 2014 born of boundless imagination of the artist. The series is completed with two new major, Butler and Waiter.

The new Alder thrush enriches the number of thrushes of Toikka, who saw in 2013 prota-nist the Mistle Thrush. The novelty is achieve 2014-ta opal glass and its texture, rich in nuances, was created thanks to vivid splashes of color.

Toikka refers to the bird using the 'Latin' name Kipo Kipo, a tribute to the expertise of the glassmakers of Nuutajärvi and, in particular, to a young glass blower specialized in birds, Kirsi Anttila, known by the nickname of Kipo.

Last fall, in addition to his work as glassblowing, Kirsi participated together with his colleague Arto Lahtinen to Bird Lovers Weekend, an event organized for the tenth time at the Museum of Glass in Tacoma, United States. For a weekend, Kirsi and Arto have blown Toikka birds for the American public, and especially for the faithful friends of Toikka birds.

As in previous years, the egg and the cube annual Toikka follow the style of the bird; were in fact created using the same technique and the colors of the thrush. 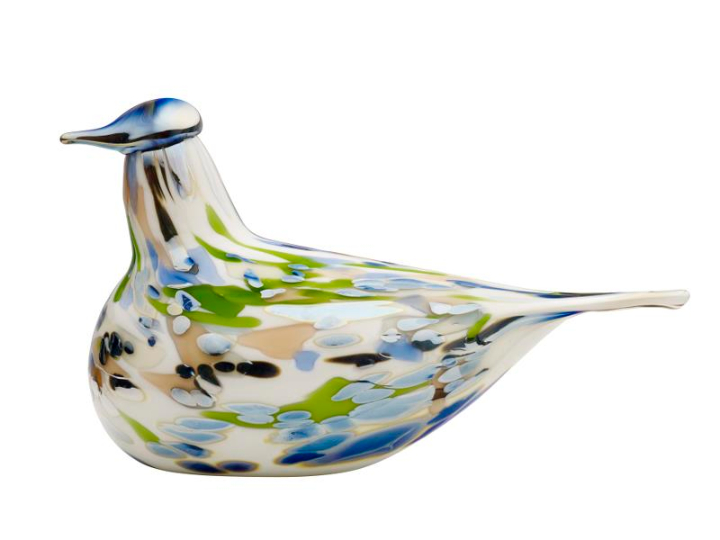 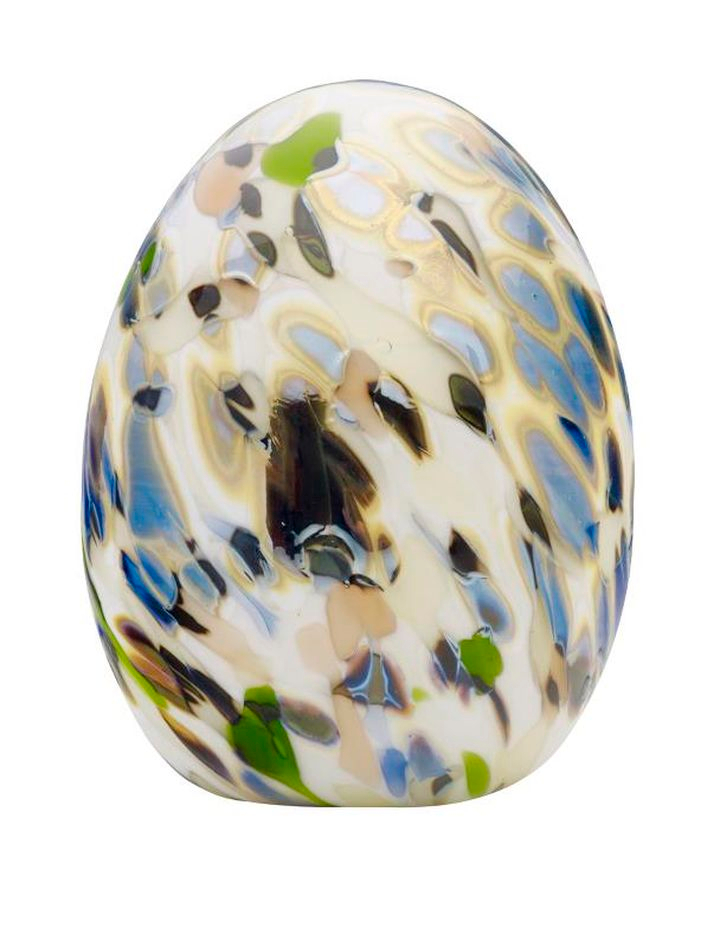 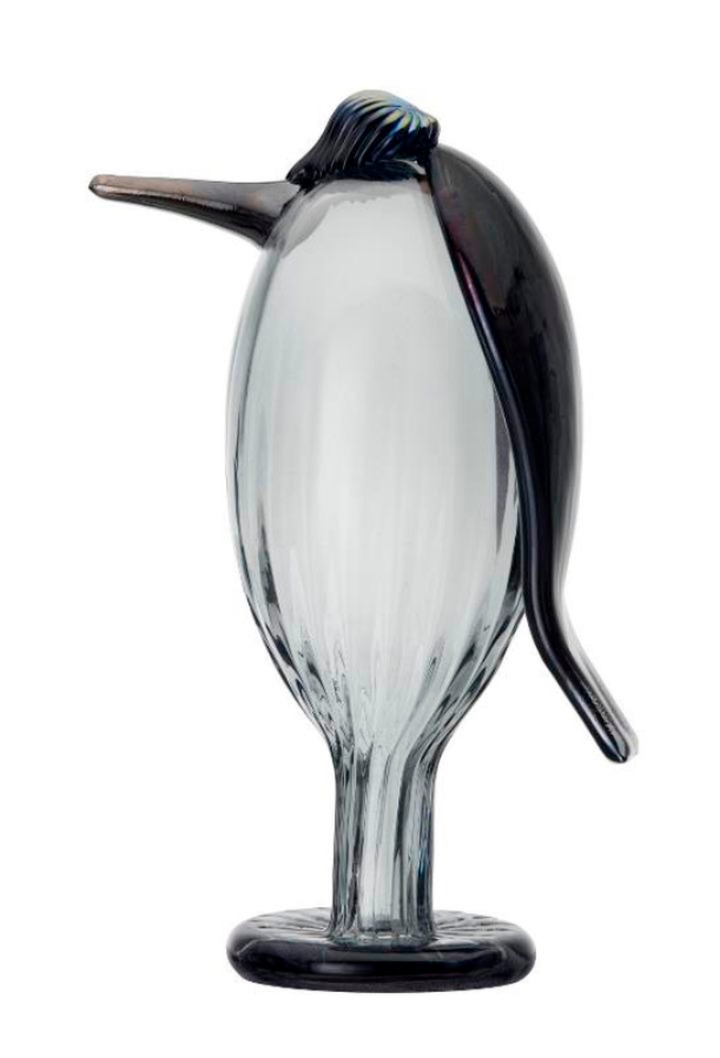 The popular series Professor Oiva Toikka Kastehelmi celebrates this year its first 50 years, and continues its history as one of the most beloved series of iittala.

In the early '60, the range of products pressed glass iittala has undergone a major renovation in the factory Nuutajärvi. The designer Oiva Toikka, who had just started working at the factory, was commissioned to develop a new pressed glass plate decorated in keeping with the times, knowing that a surface pressed glass was technologically complex to implement and that the glass base could be aesthetically unpleasant.
The technical challenges of glass inspired Toikka, unconventional and innovative at the time already. The experiments with the reason of dew drops carved into the glass gave birth to a new texture to the years' 60. Dew drops reflected the light in a joyful on the three-dimensional surface and once positioned correctly could be the basis of the object. The design has been aptly called Kastehelmi ("Dewdrop" in Italian), as inspired by the brilliance of the drops in the morning dew.

Originally, the dish was put into production -in 1964- in two different sizes. In the following years, other dishes were produced in different sizes and also bowls, coffee cups, complete with saucer, a zucchieriera, a milk jug and a candelabra were introduced into the range.
Toikka, known to be a pragmatic man, thought it natural that the range is ampliasse with his success. The same philosophy is adopted today: the new series reintroduced into production in 2010 for the fiftieth anniversary of the collaboration between Toikka and iittala, originally included plates and bowls, but Toikka designed the design of other components: the votive bowl dessert and the lift.
The lively and delicate Kastehelmi has consolidated its position as one of the series iittala for the table and the house most popular ever. 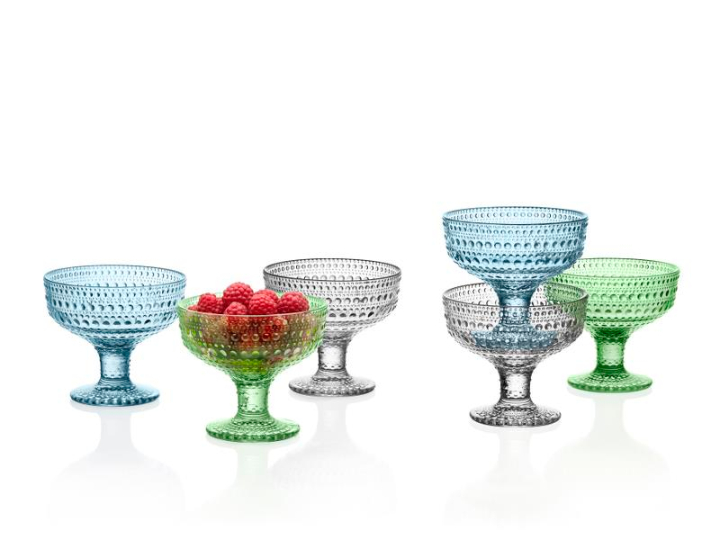 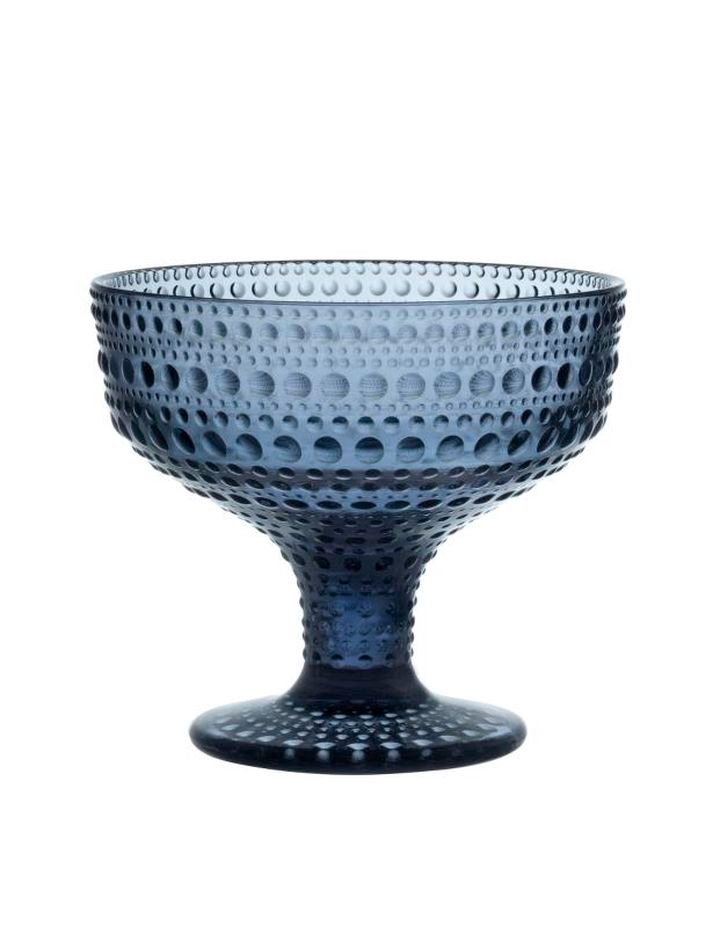 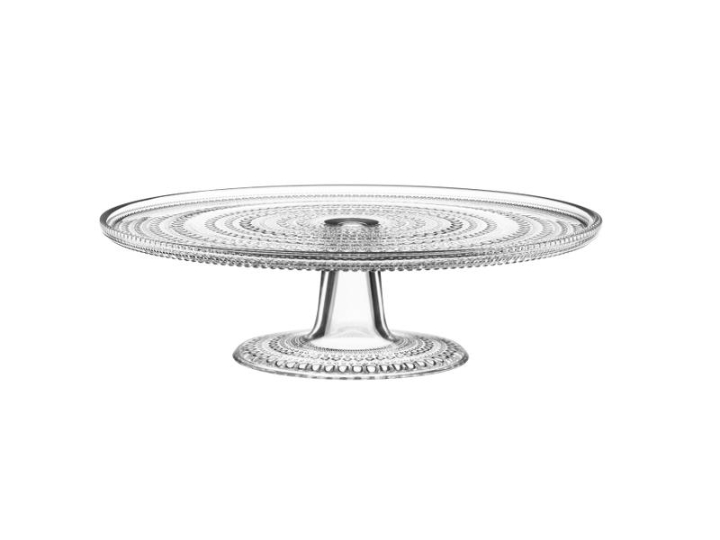 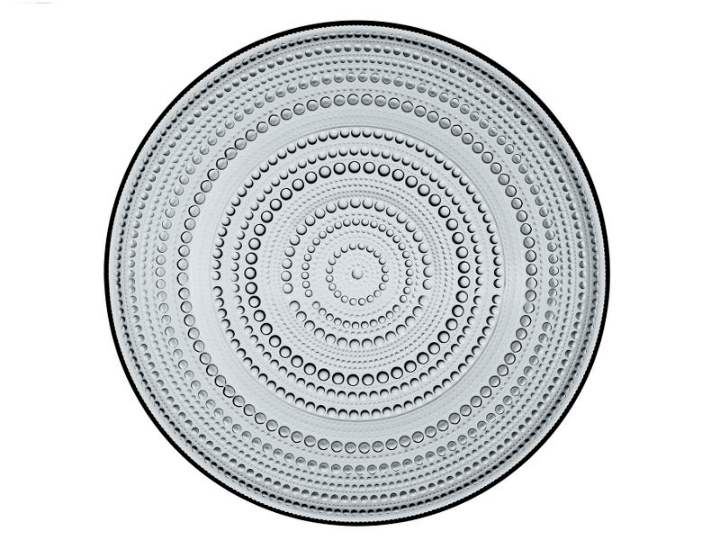