Mistral is the new kitchens Scandola Furniture, an innovative collection and at the same time in line with the traditional stylistic features of the company, conceived to combine the craftsmanship of solid fir wood with more modern and clean lines.

The system consists of Maestrale kitchens that open to the living and present new elements from contemporary connotation, defining and consolidating more and more style shingle as versatile and evolving.

The innovations proposed by the Mistral system are many. The first concerns the doors, designed in three different types: a frame, “Fada”, with a particular relief frame enhanced by a splayed molding; “Nora”, a smooth door with engraved slats of different widths, which create a pleasant play of chiaroscuro; and the last, very particular, with “old wood” staves recovered and restored from ancient disused mountain buildings. All the doors are in a brushed finish, which gives a particular and pleasant tactile-visual effect.

There are also openings for new solutions: the gorges, carved in the upper profile of the doors of the base and side of the columns; handles recessed, formed directly in front of the doors; and the chrome handles, which, with their well-defined line and clean, reminiscent of the handles of pots. 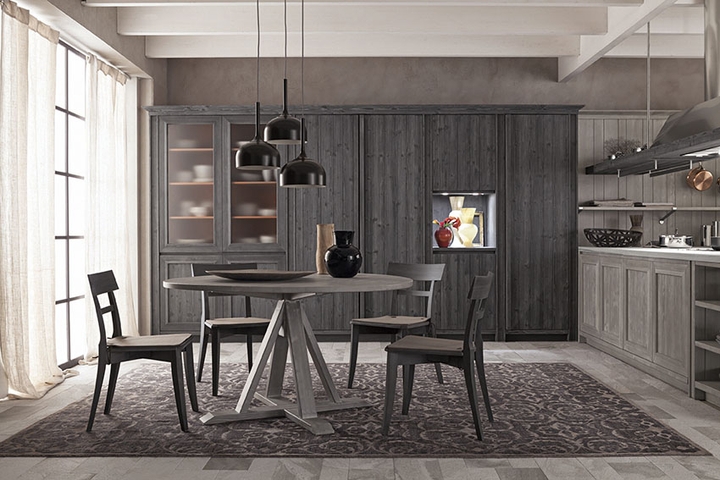 The compositions are punctuated by 9 cm wide sides with a central groove, which elegantly delimit the succession of columns, bases and wall units. Steel details give contemporary accents to the environment, such as the morions that support the shelves and the functional towel / tool holder bars that can be placed at the end of islands and bases.

News for hoods: the model Maestrale (island or wall) suspended from the ceiling, custom made in brushed fir, which seamlessly integrates in the compositions; and the hood wall covered in eco cement for those who want an unusual effect and gritty.

Among the finishes, Scandola offers new and original variants, which are well linked to the traditional character of the company. For the doors, the boiserie, the cupboards and all the other elements of the kitchen, in addition to natural tones, such as slate, pearl white, chalk and graphite, brighter colors such as blueberry, mustard and lobster have been added, and the particular wood finish old, which has knots and small cracks and which gives the kitchen a sense of lived-in and authenticity. 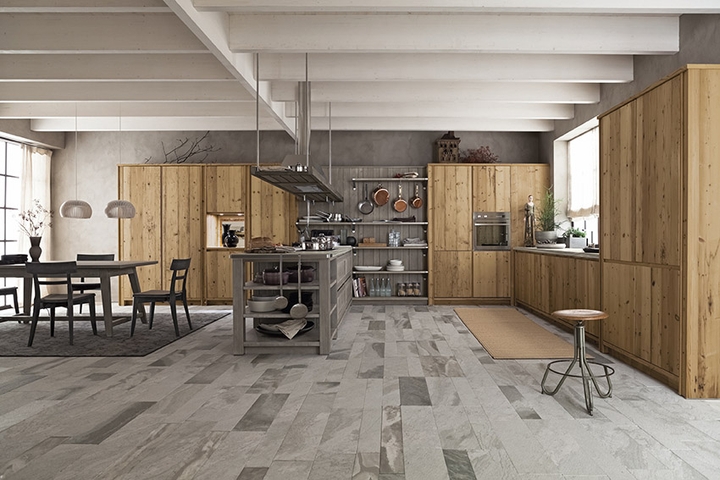 For the worktops, contemporary materials were identified, such as eco cement and hanex, and original materials such as porcelain stoneware and "ice quartzite" stone.

In the Maestrale system there are also novelties for furnishing accessories: square (140 × 140 cm) and round (140 cm diameter) dining tables with inclined legs, which refer to the Alpine tradition; and the Ala chairs - with curved backrest, available in monochromatic and bicolour colors, with colored seat and legs in wood finish - and Maestrale - in beech with a comfortable seat that can also be padded or equipped with a thin felt cushion.

This variety of choices comes from the desire of shingle to offer the ability to customize as much as possible your kitchen and living room, creating unexpected color contrasts and modern or elegant and pleasing harmonies of hues, and also playing on possible conflicts of tactile materials. 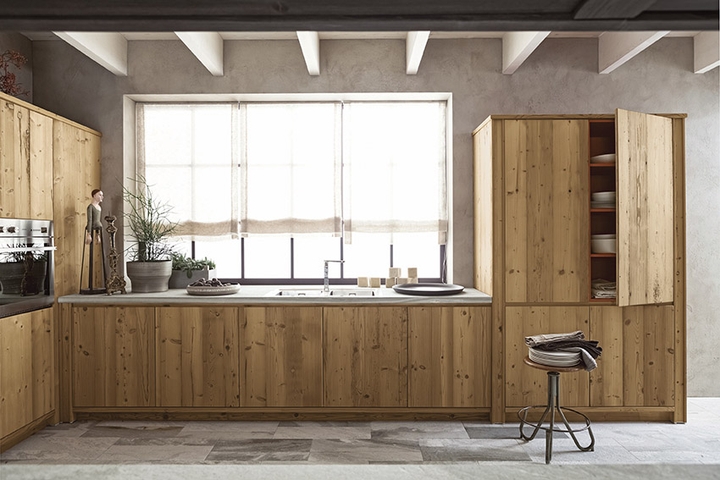 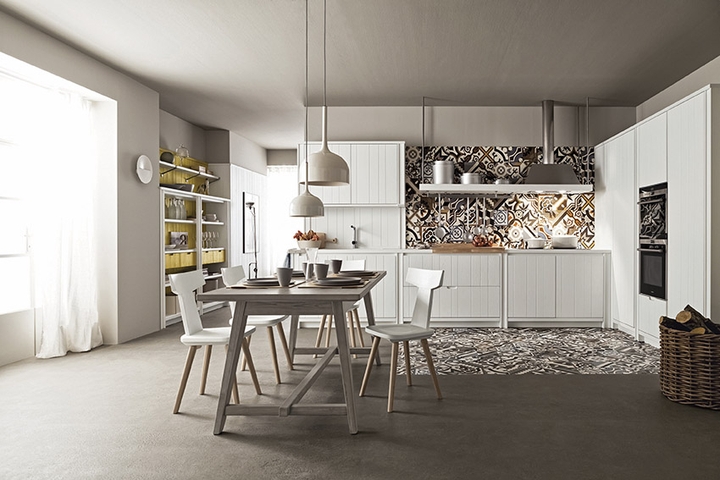 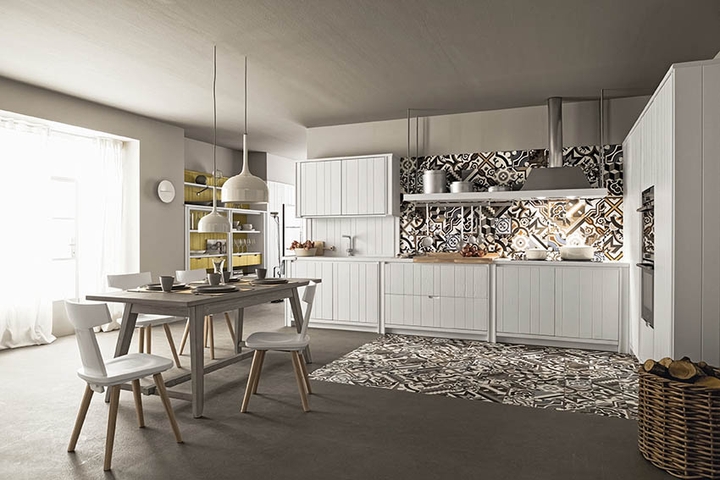 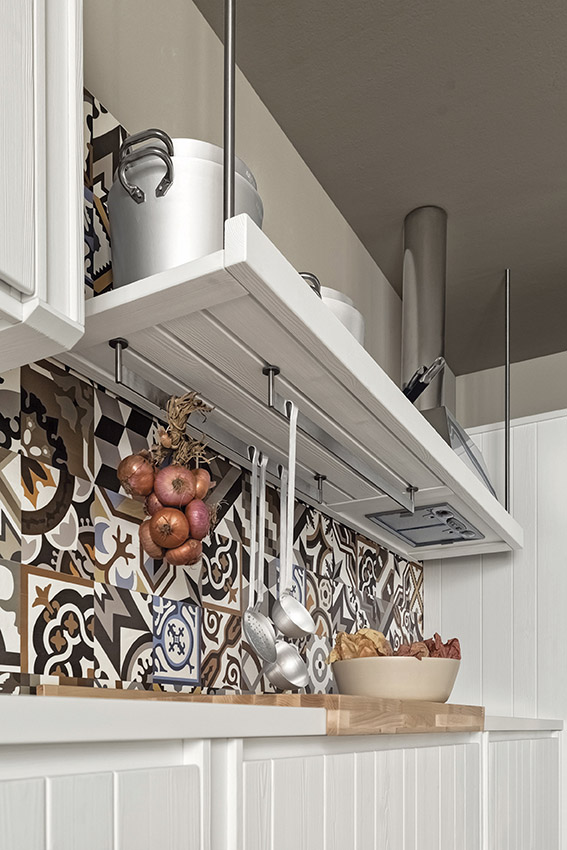 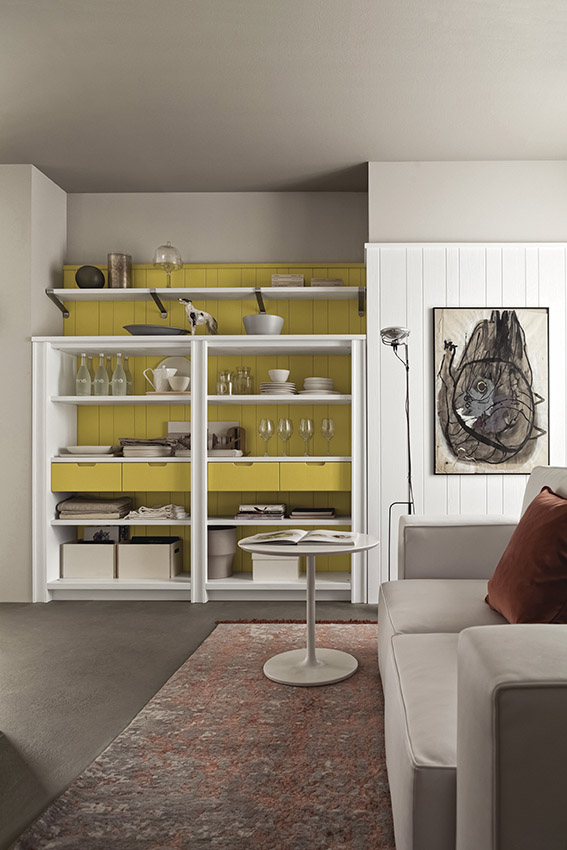