The novelties of Gufram A Maison & Objet it has been modified: 2016-01-12 di Benedict Flowers

Gufram, the more pop and irreverent brand of Italian design, back in Paris on the occasion of MAISON & OBJET, From January 22 26 2016 to.

The Paris fair, flagship event for international buyers, professionals and design enthusiasts, is an ideal opportunity for the brand to continue with the celebration of its 50 years and present a preview of a new special edition of the iconic and irreverent sitting Pratone.

In addition, the stand in Paris will be enriched with the Limited Editions Bocca sofa Gold version and sitting THE END 1516 conceived by Toiletpaper, both made to celebrate this important anniversary that will develop throughout the 2016.

Finally, the pop spirit and irreverent Gufram will be highlighted by the presence of some products collection Functional Pop, the catalog containing projects of general circulation suitable for domestic use more "traditional".

Radical project and symbol of the cultural revolution of the anti-design - born in 1971 from the mind of Giorgio Ceretti, Pietro Derossi and Riccardo Rosso - Pratone is presented in a new white version. Nordic Pratone, produced in a limited edition of 50 specimens, falls within the range of special projects from Gufram on the occasion of his fiftieth birthday.

Why white? Charley meets Vezza, Global Creative Orchestrator Gufram: "We thought a lot on the trend of Scandinavian design and we wondered how we could try to interpret it in spite of ourselves we are poles apart: pop, cheeky and irreverent ... Believing to recreate the basic conditions for Nordic creativity, we squeezed in a cold room to think. I think we have suffered the same cold of those latitudes, but there came the ideas. But something happened: the Pratone was completely frozen! A white beautiful, unique, unrepeatable otherwise. Here the Nordic Pratone, the first and last product of Scandinavian Gufram ". 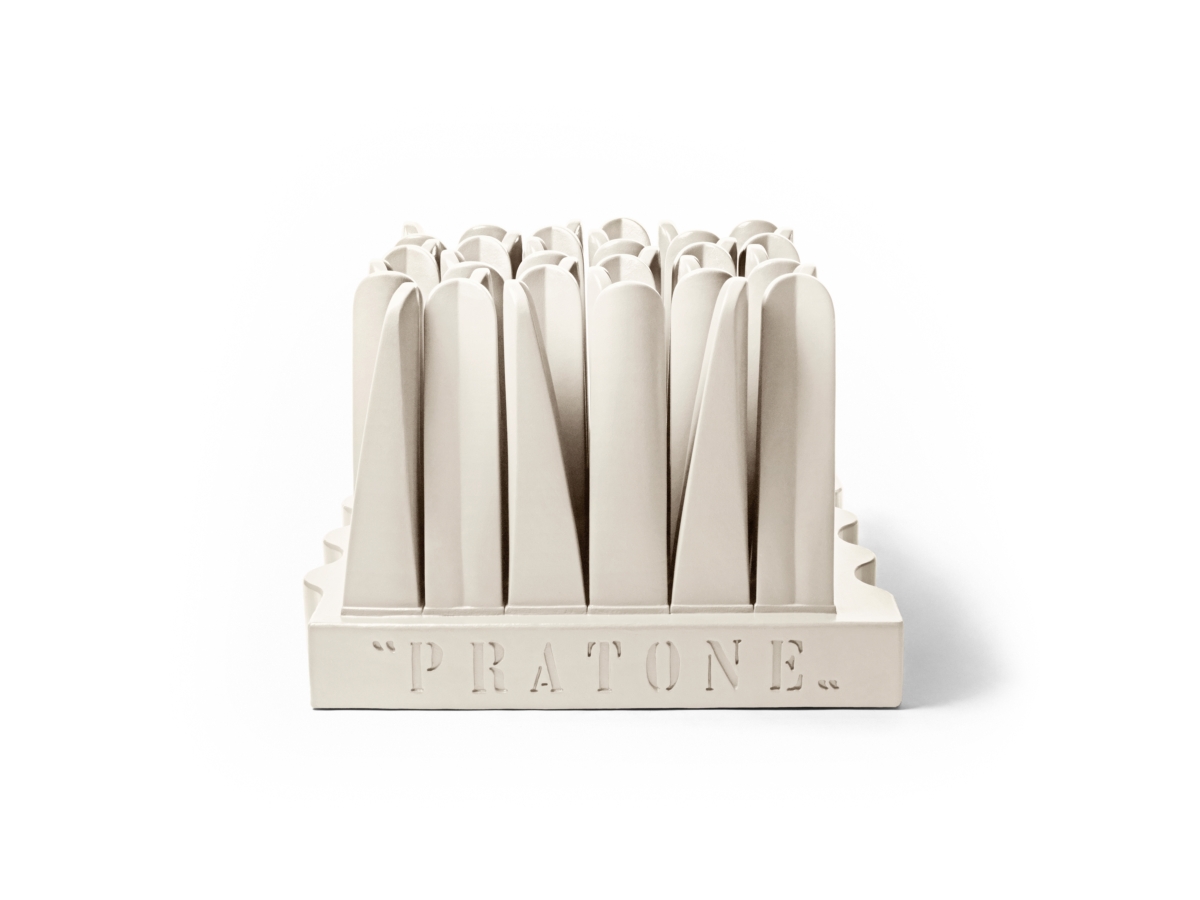 Sink through her long soft stems of this session outside the box is possible thanks to the special material that forms the parts. Builted flexible polyurethane foam and finished entirely by hand, Pratone is then covered in Guflac, a special paint designed by Gufram which preserves the softness of this material and at the same time to create the most varied finishes. Just the elasticity of the material makes Pratone a subject for the rest individual and collective, temporary, playful, unpredictable.

Together with Nordic Pratone, Gufram presents at MAISON & OBJET the other limited editions designed to celebrate the 50th anniversary of the brand: the Bocca Oro and THE END 1516.

The special limited series of only fifty pieces of the Bocca in Oro sofa, an emblematic project of the collaboration between Studio65 and Gufram, was premiered last November in Turin. Maintaining its iconic shape, inspired by the fiery red lips of Hollywood divas, this new edition underlines the brand's important milestone and embellishes even more an object that has entered the most beautiful homes and most important museums in the world. 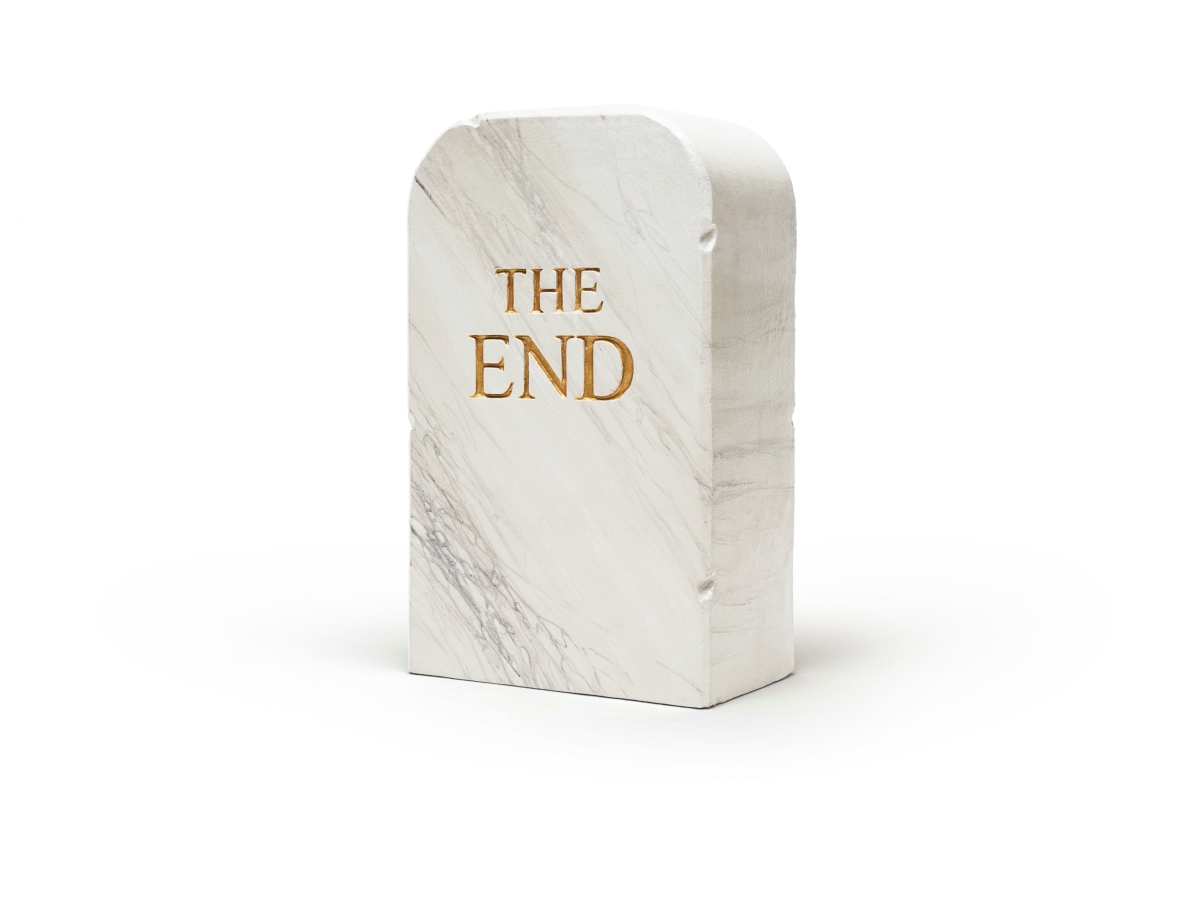 Gufram THE END 1516 by Toiletpaper

THE END 1516, previewed in Miami during Art Week, takes up the stylistic features of the ironic epitaph created by Maurizio Cattelan and Pierpaolo Ferrari to sanction the “end” of the Gufram brand, but also to suggest a new beginning. This limited series of 500 pieces is produced in “real-fake” Carrara marble with gold writing: a virtuosity achieved thanks to the Guflac that embellishes this irreverent memento mori.

Finally, the DNA of the brand expresses its essence through catalog products Functional Pop flanking the stand in Paris the new icons in a limited series.
Functional Pop collects large-run projects that combine Gufram's lucid madness with everyday functionality. The seats of this collection, in fact, tame the idealism that distinguishes the brand: function thus finds a new place, aesthetics are at the service of use, giving life to products that are innovative in form but suitable for the most varied homes.

Blow, a daybed that reinterprets the contemporary radical design that the brand has contributed to developing, supporting and export in the world.
Blow, recalling the reassuring and archetypal appearance of the mattresses of the seventies, brings the flavor of a holiday that can last all year round into the home.

Supported by four essential legs in tubular aluminum, the structure is made of polyurethane foam, a material that has always been Gufram's flagship. Waterborn was used for the upholstery, an innovative fabric produced by the Danish company Kvadrat. The choice is an integral part of a continuous research that makes use of the most advanced results: Waterborn stands out for its ease of processing combined with production characteristics based on sustainability since, for its realization, 70% of water and 35% are saved. % of CO2 compared to normal microfiber fabrics. 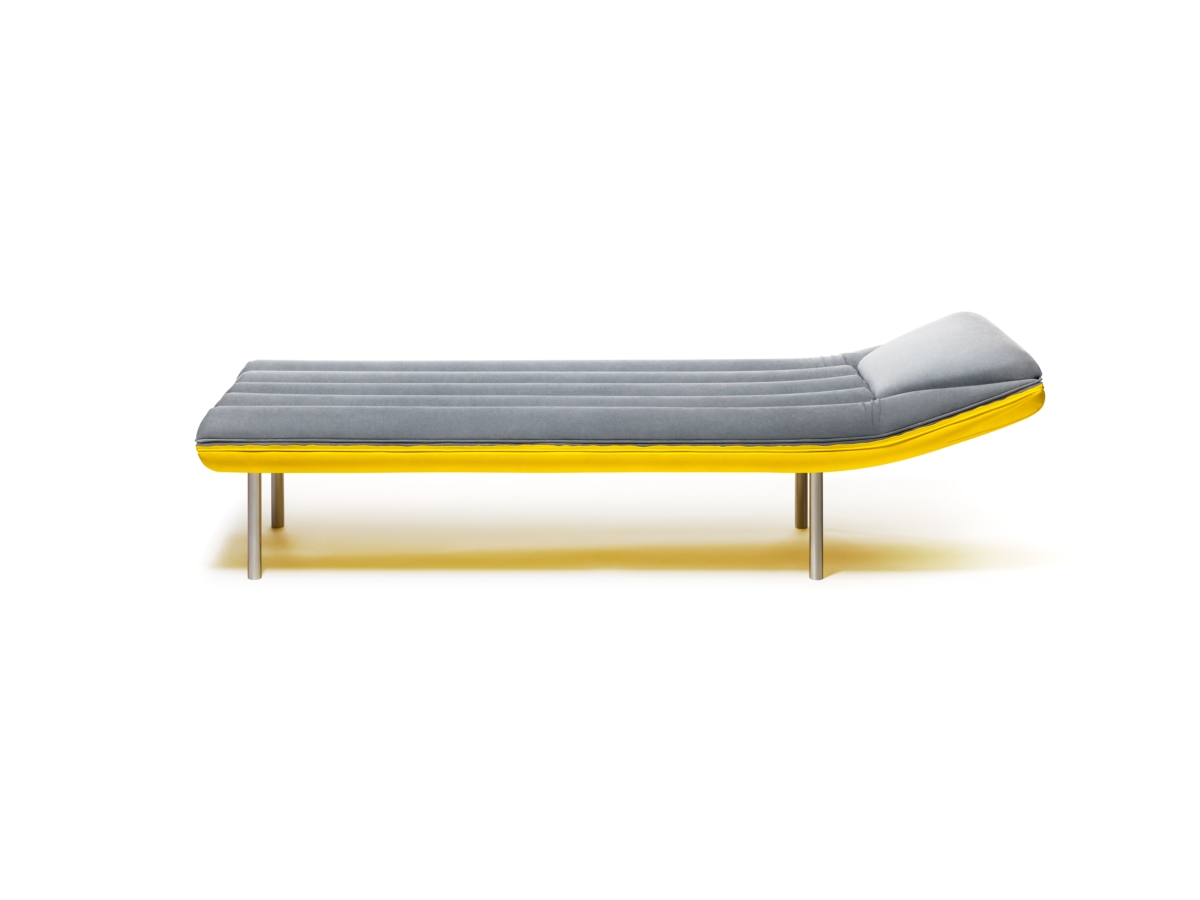 Placed on the ground but ready to move elsewhere, Alvar is a chaise-longue in structural polyurethane foam that preserves the lightness and versatility of the Sixties. Surely after 40 years she has matured in spirit, but in the depths of her soul she keeps her hippie attitude alive. At the time he saw the future in the innovation of polyester yarns but did not want to abandon the creed of natural fabric.

Utopia has become reality with the warps contemporaries. He thought the years of radical design, Alvar is one of the first products with which Gufram faced the challenge of creating modern furnishings opposed to the status quo than in the Mannerist style. Alvar is a demonstration of how the confrontation began with the '68 is now finally concluded successfully in favor of products like these, even then dynamic and fresh, organic lines and no frills discounted. 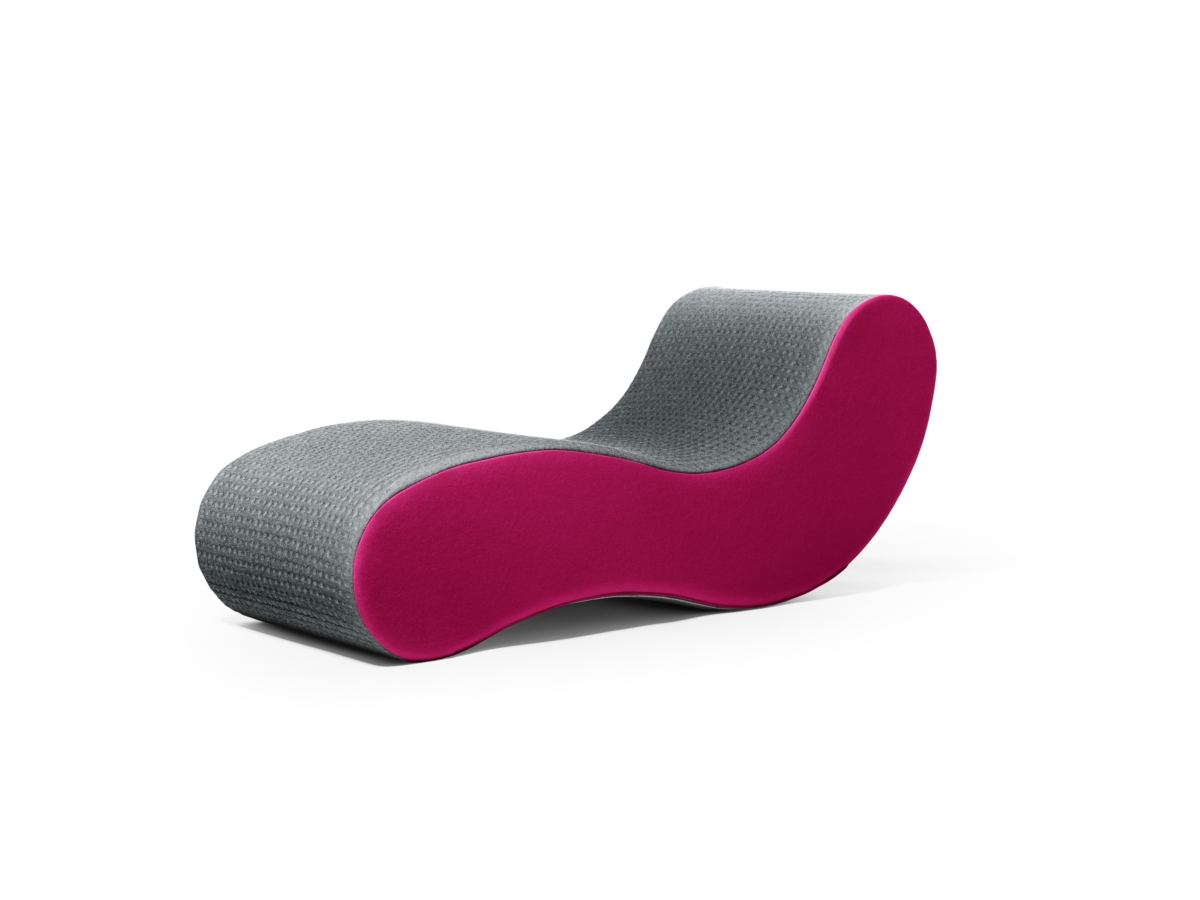 Designed in 1968 by Giuseppe Raimondi, Mozza maintains the vibrant revolutionary appeal and the ability to adapt to many housing needs. Power output in its current edition with a more sexy, slender, Mozza is a truncated inverted cone and cut diagonally on which it would seem impossible to sit. Reclining on the inclined surface, however, the structure begins to dry under weight becoming an armchair with backrest and armrests. A simple but original constructive magic that makes it unique.

The mass outside Mozza misleading. Thanks to its light weight this session becomes a nomad object and versatile living in the territory. Primary seat for the living room or home chair perfect service in sophisticated and elegant lobby of hotel design, Mozza merges contemporary international characters of the Italian radical design. 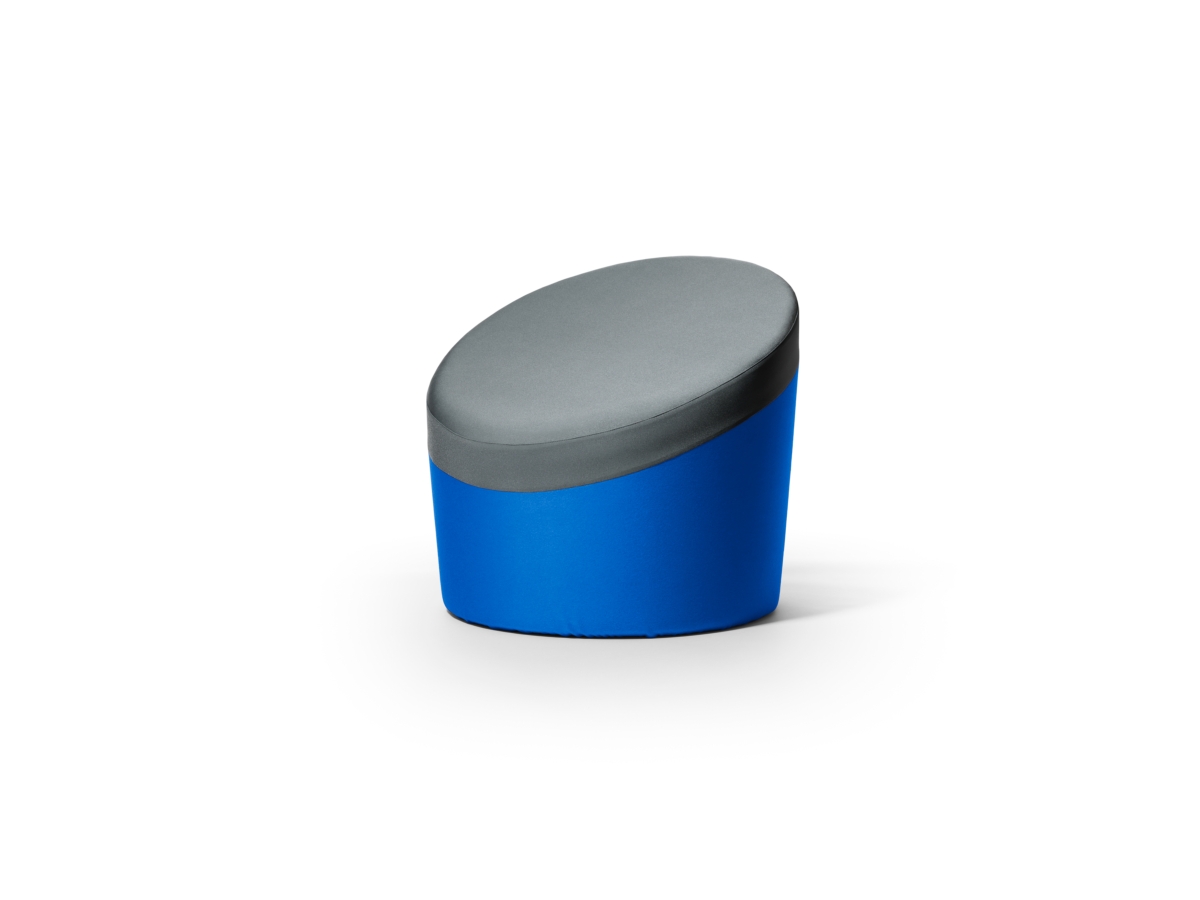 Detecma is acrononimo of Design, Technology and Mathematics. Three values ​​joined together for the first time in 1967 year in which the physicist Tullio Regge, recognized as one of the most influential scientific thinkers of the twentieth century, becomes a mathematical equation of fourth degree in a book by deliberately ergonomic features. An event of epic Gufram who has decided to pay tribute, calling into production a seat that has revolutionized the history of design through its design approach.

Detecma denies any formal definition, a chair sitting on the ground a little 'pouf, a bit' chaise longue that creates an image forerunner of a way of understanding and living the project of furniture that will become a mass phenomenon only a few decades later. Detecma is a project that in 2014 back with a connotation of topical disarming: the mathematical formula parametric "open source" is the Cichlid Dupin which is generated and color gradients that span the entire spectrum of colors in an explosive celebration of full tones and nuances perfectly blended. Six versions that combined return all shades of the world. 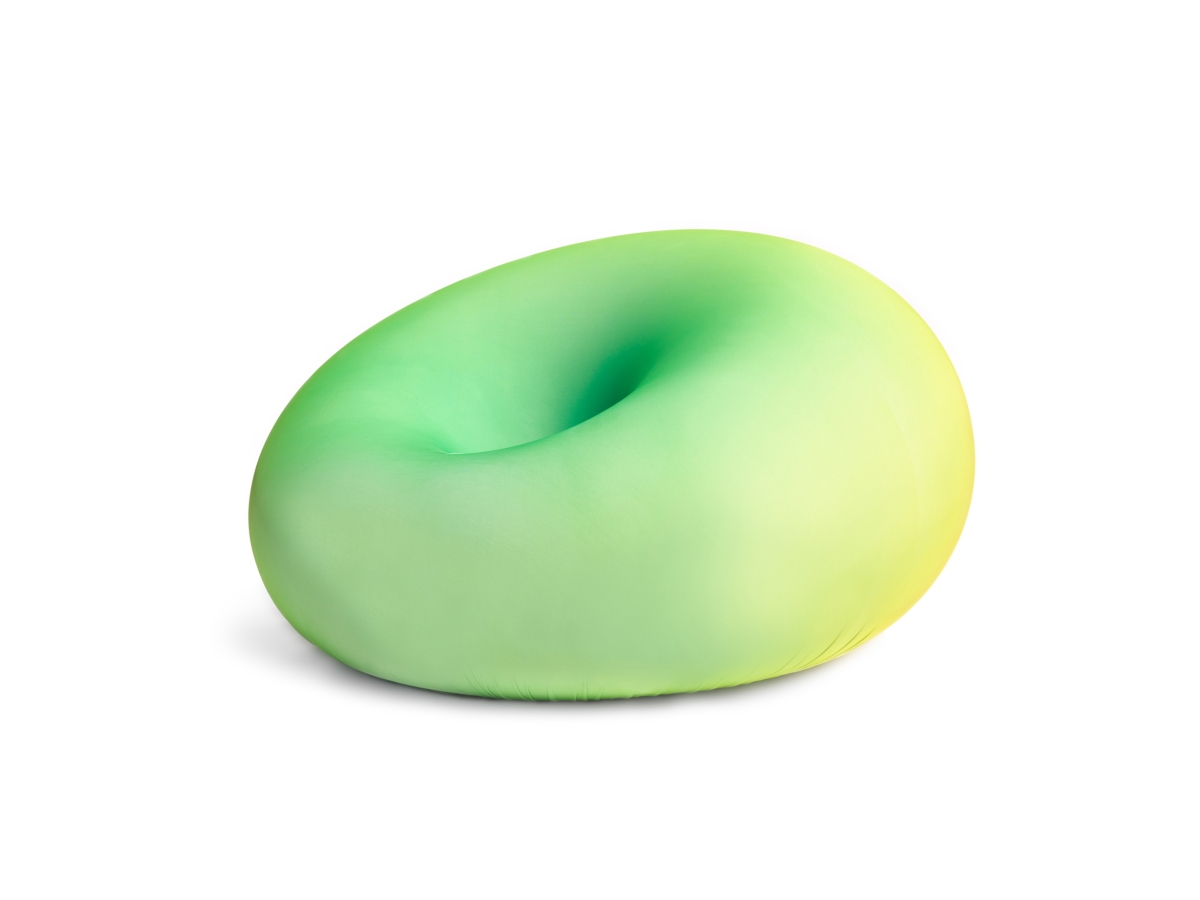