The events of the Salone del Mobile.Milano: a tribute to the ingenuity and planning of Leonardo da Vinci. it has been modified: 2019-02-20 di Benedict Flowers

The Salone del Mobile.Milano anticipates the commemorations of the city for the 500 years since the death of Leonardo with two large installations: in the city, the originality and visionary depth of his scientific investigations will be celebrated; at the Fair, the experience of designing and knowing how to make Italian, from the time of the Master up to the present day.

On the occasion of the 58a edition, the Salone del Mobile.Milano reconfirms its deep bond with Milan, recalling its most ingenious and eclectic "adoptive son" through two installations of great quality and evocative power - one in the city and the other in the Fair - , whose visit will confirm a memorable cultural and emotional experience.

No other city has had as Milan the privilege of a long and fruitful presence of Leonardo. A bond lasted about twenty years, during which he offered Duke Ludovico il Moro the best of his creative ability. Among the many projects, water studies tell how Leonardo's eclectic genius was always fascinated by this element that he investigated as an artist, architect, scientist and engineer.

Precisely for this reason, from the 5 to the 14 April, inside the Conca dell'Incoronata - of which presumably Leonardo has overseen the construction works as well as designing the famous wooden doors - the Show will offer the city AQUA. Leonardo's vision, an immersive site-specific experience conceived by Marco Balich and developed together with Balich Worldwide Shows, which simultaneously narrates, between reason and enchantment, a small fragment of the Renaissance and the future of Milan.

Here, to cover the Conca, a real architectural graft will be created in the form of a large body of water, at the end of which a large LED screen will become a window on the Milan of the future, showing us a changing skyline depending on the time of day. Below this structure, right inside the canal, a Wunderkammer will be created in which visitors can experience all the beauty, energy and shape of the water in a total environment that will envelop them in the image and sound thanks to the use of the most advanced technologies.

For visitors waiting, an informative foyer will be created, located before the Ponte delle Gabelle, where it will be possible to deepen the link of this historical place with the multifaceted genius of Leonardo. 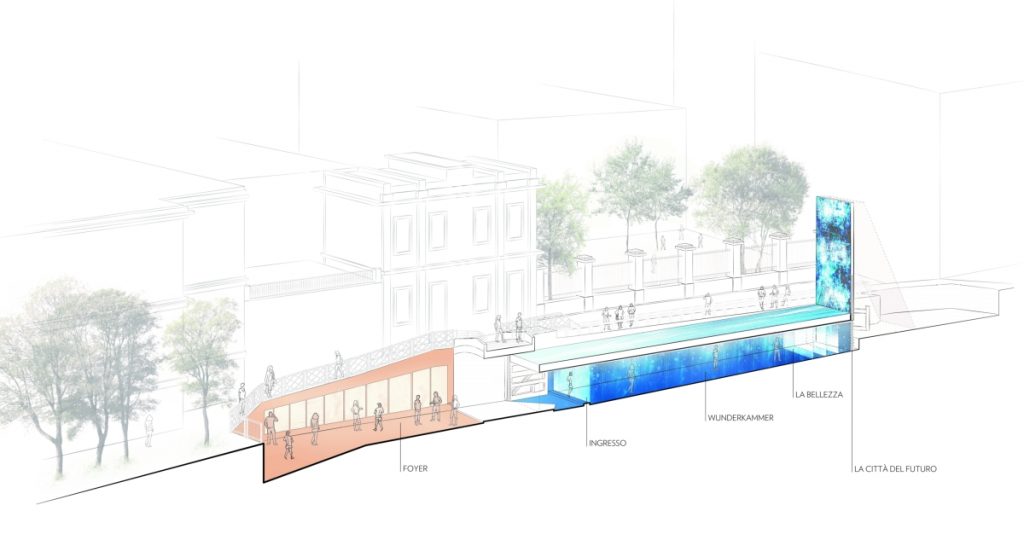 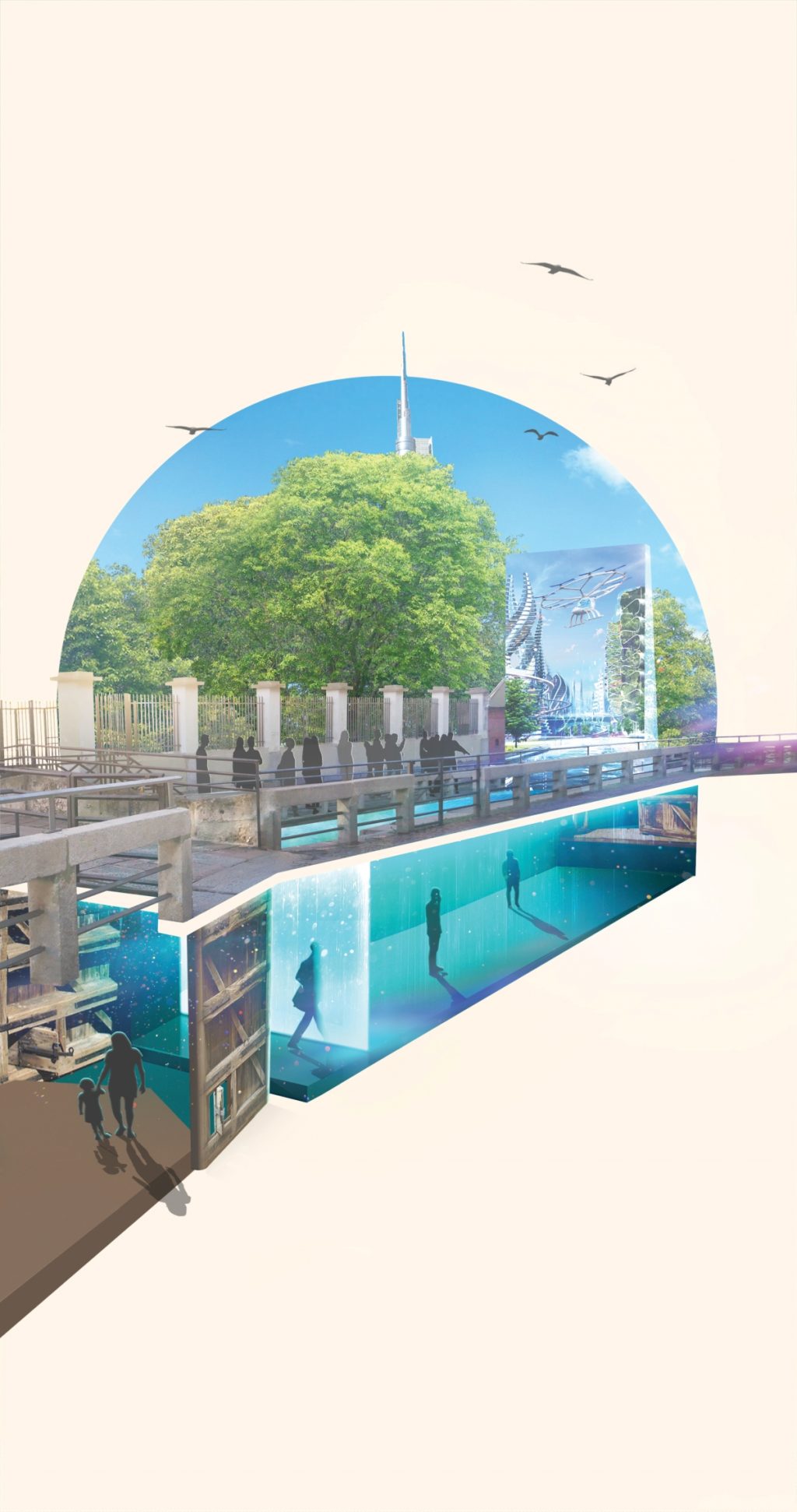 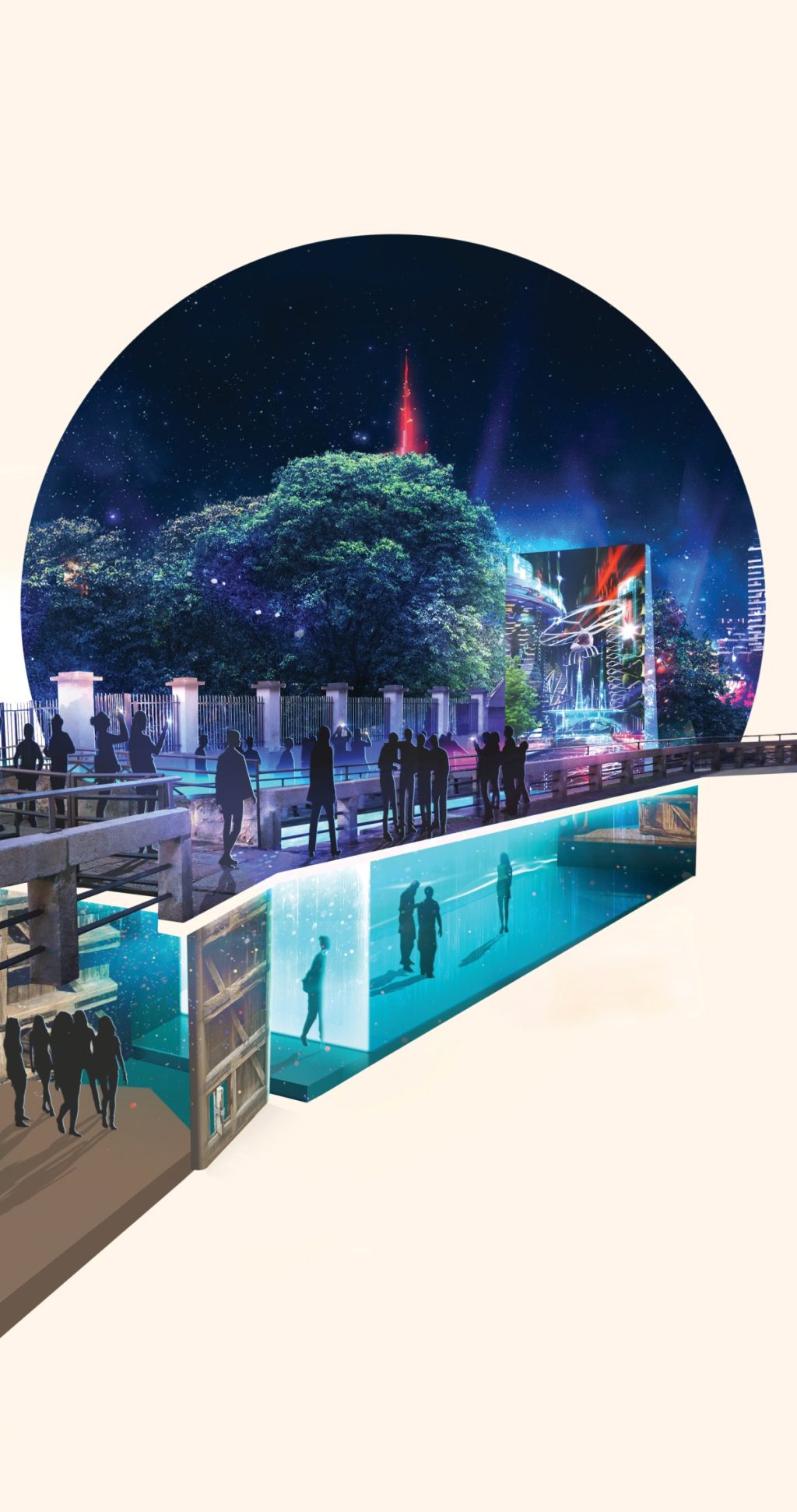 DE-SIGNO. The culture of Italian design before and after Leonardo

At the Fair, however, from the 9 to the 14 April at the 24 pavilion, the installation that the Salone del Mobile.Milano will dedicate to Leonardo will celebrate his work but above all his legacy to the culture of designing and know-how, a theme today more than ever determinant for the design world.

DE-SIGNO. The culture of Italian design before and after Leonardo will be an evocative tale of the genius of Vinci and of its relationship with contemporary Italian design.

At the time when the Maestro lived in Milan, the city was, as today, extremely dynamic: the arts and crafts shops were forges of creativity and know-how while disciplines such as engineering and architecture reached very advanced levels. Therefore, the culture of the project is the true link between Leonardo's ingenuity and the world of Italian designers.

DE-SIGNO will be an immersive installation that will combine in an engaging and exciting way the languages ​​of cinema and theatrical scenography. Inside, in fact, it will host a show of images and music in which Leonardo's projects and the industriousness of the workshops and renaissance workshops will be told in relation to the know-how and the design of contemporary design companies: all in the Italian sign of culture of beauty.

The installation, designed by Davide Rampello and designed by architect Alessandro Colombo, will occupy a quadrangular space of 400 square meters and will be characterized by a monumental scenography dominated by two 6 meters wide and 3 wide portals, made entirely by hand in wood by masters sculptors and painters and inspired by original drawings and studies by Bramante, the most prestigious architect in Milan at the time of Leonardo. 4 cinema-sized screens will give life to the show of music and images that will envelop visitors. 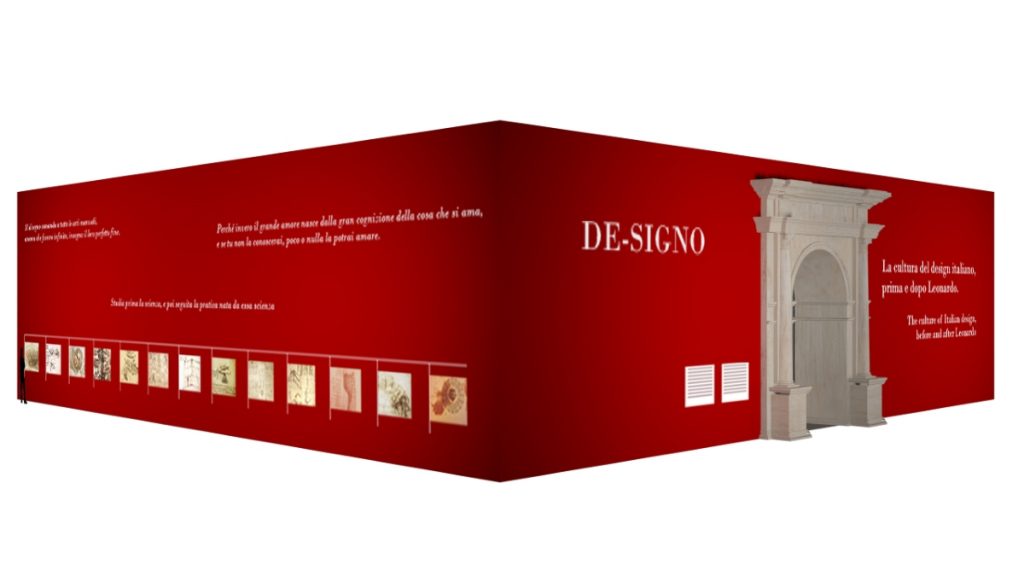 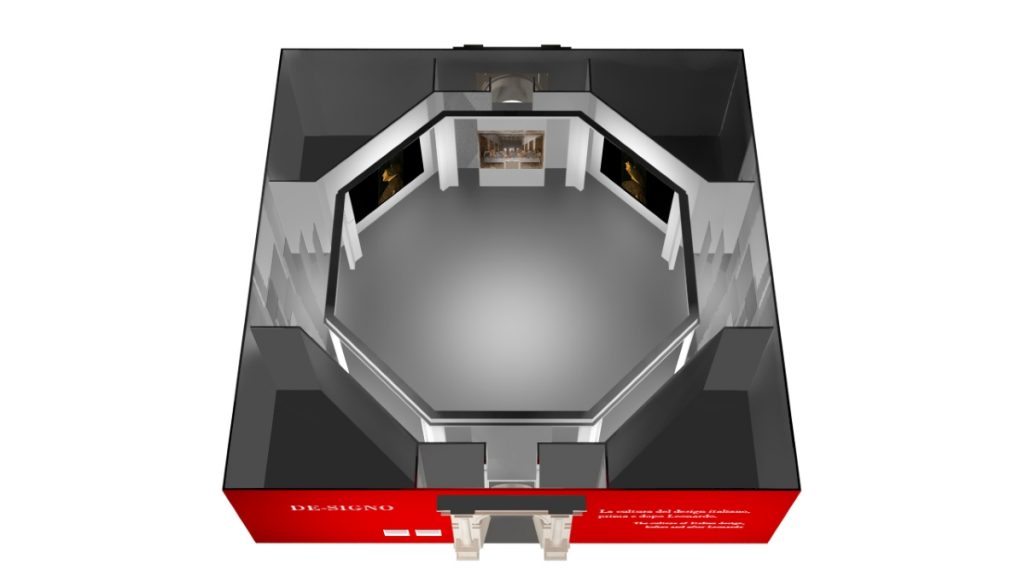 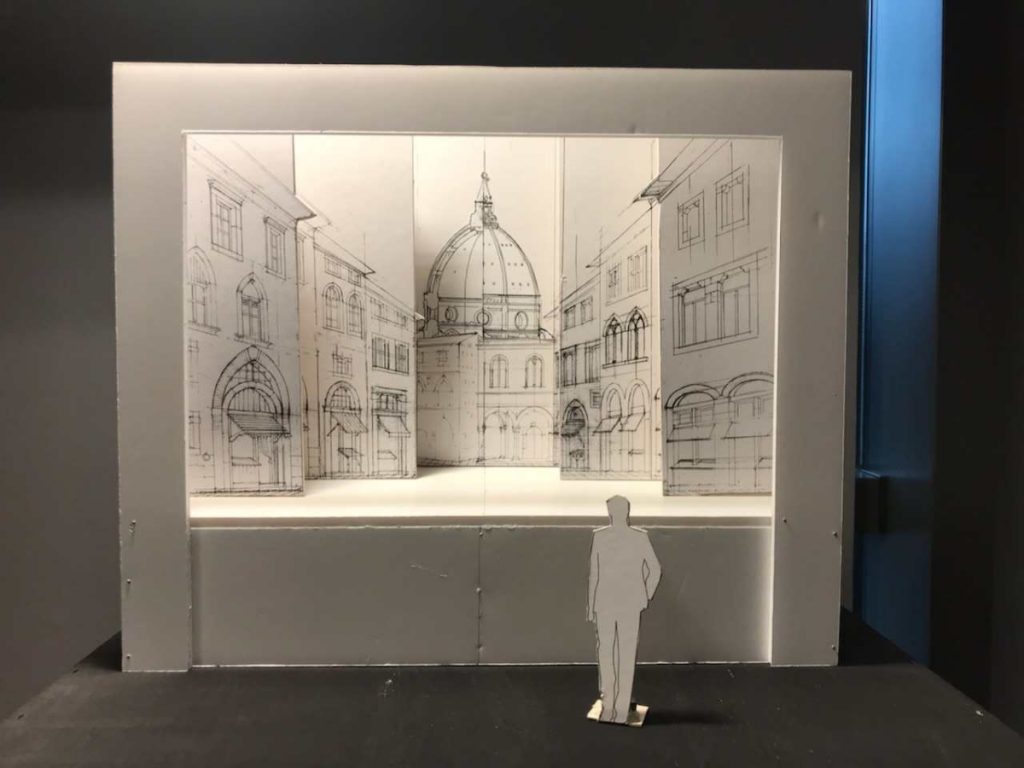 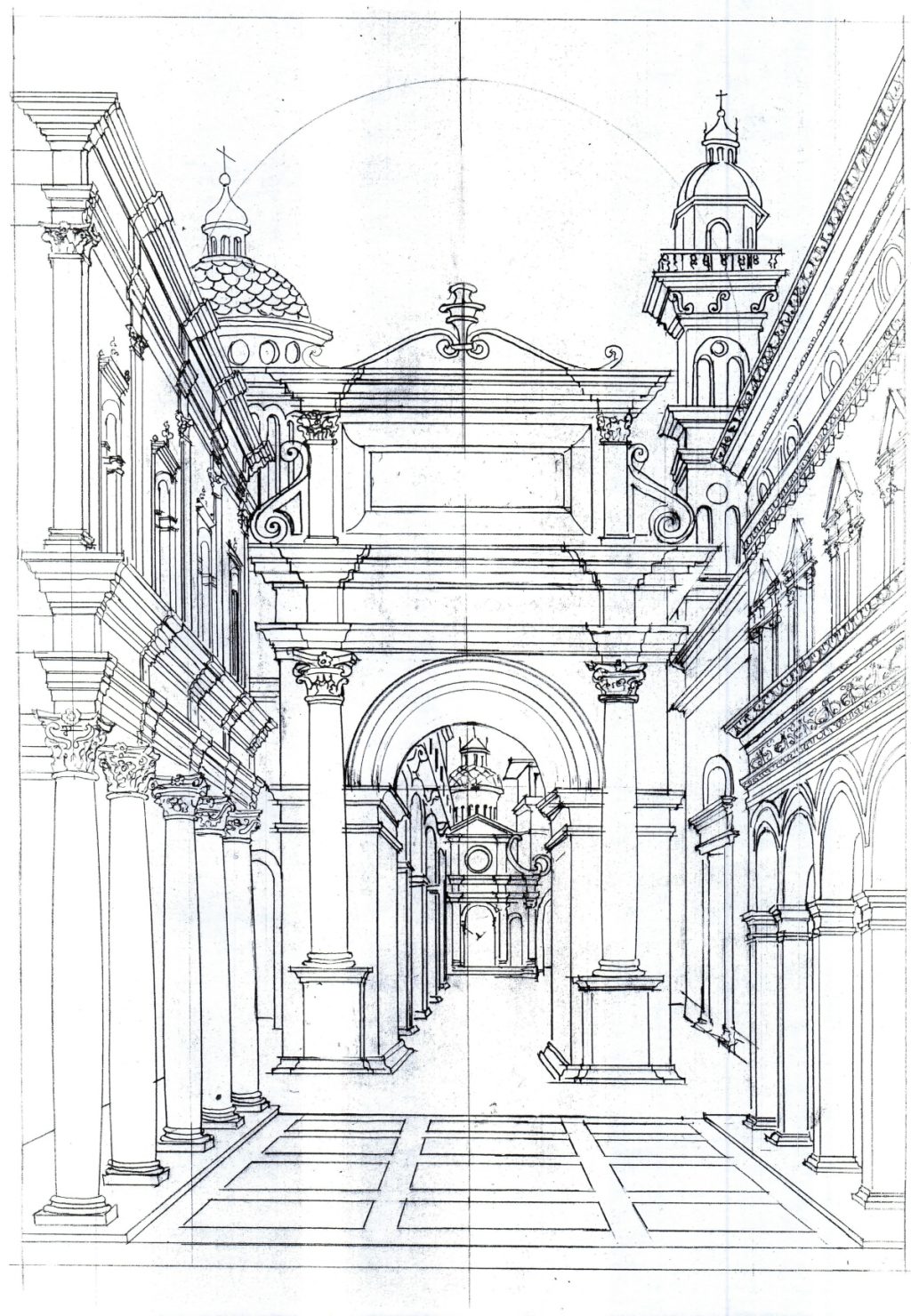