A SPA with a medieval atmosphere in an ancient crypt it has been modified: 2017-02-14 di Benedict Flowers

In southern Burgundy the new wellness center designed by Alberto Apostoli. The Italian study realizes a SPA in an ancient crypt in the historic center of the city of Macon.

Macon is an elegant town nestled along the banks of the Saone river; it is the gateway to Burgundy for those arriving from the south of France. Its historic center is a maze of paths that wind around noble historic and religious buildings. And it is in one of these streets, a stone's throw from the church of St. Pierre, that the ideal location has been identified for the new beauty and wellness center “Atrium - SPA & Beauté”.

On two levels, Atrium welcomes its guests on the ground floor, in a stylish living room style "New-Baroque"; This area is dedicated to beauty treatments for face, hands and hair. The staircase in white marble effect tiles, located on the left side of the building, you go down to the basement, the very heart of downtown; an atmosphere "magical atmosphere", medieval, offering guests an unexpected mystical feeling.

In the basement the property has decided to build the most valuable area of ​​the spa, despite the technical and construction problems that the space presented. The basement is in fact characterized by its vaulted roof and is completely made of stone.

Aesthetically reminiscent of an ancient crypt and it is plausible to think that in the past has served precisely this function, given the proximity of the church of St. Pierre. The volume is particularly limited height, up to about one meter and twenty centimeters at the lowest point. Given the lack of significant openings, the environment posed major technical difficulties and required special design solutions for the installation of the necessary air handling units; all without ruining aesthetic so characteristic.

The property has therefore decided to cross national borders and seek to Education Apostles, a company specializing in the design of SPA and wellness centers internationally. The meeting took place in Paris, on the occasion of Equip'hotel, where the Apostles was present as ambassador to Italy.

Highlight the '' existing 'giving expressive power to the project. The project idea proposed by Alberto Apostoli has now met the expectations of the Customer, managing to combine technical and aesthetic requirements, thanks to the intuition of mixing elements in plant scenic elements. The project is in fact characterized by a long curved corridor leading to the wet zone, on the one hand, and to the treatment rooms, on the other. In the hall it was converted into a hotel that welcomes all ducts and hides behind a curtain-tended backlit and containing the outlet nozzles. Thanks to a small graphic device, the outlets blend into the cloth itself until it disappears in the decor reminiscent of the typical vineyards of the city of Macon, famous for its Chardonnay. In this way it is avoided the usual ceiling positioning of the nozzles which would have further reduced the available height.

The SPA area occupies a space of about 270 square meters. The wet area includes a Finnish sauna and a steam bath, almost entirely made of glass; then we find a Jacuzzi area with experience shower and a 'relaxation area. For the treatment area we were instead provided two single cabins and a couple. Complete the environment a small tea corner which the mobile seems to float in the air, thanks to a light placed on the underside.

Great attention was given to the lighting project, crucial to solve difficulties related to a particularly severe competition. The lighting is almost totally indirect, obtained by the strip RGB LEDs, controlled by a DALI system and positioned along the profile of the time in order to highlight the curvature.

To balance the weight of the stone and make the most refined, Alberto Apostoli has worked on white, black and inserting some golden details.

Studio apostles tried to privilege Italian products; ceramics, mosaics, paintings, and even the treatment beds are all "Made in Italy". Some items were custom-designed as the big lamp which incorporates the spa logo, positioned in the relaxation room. All furniture is custom, like the many mirrors and large glass surfaces, required to do "breathe" the environment.

Researched the use of an elliptical mosaic which accompanies guests toward the wetland, merging with some fine porcelain stoneware cuts specially designed and highlighted by some lights on the floor.

So Apostles summarizes the project:

"From the first site inspection I realized the great expressive and design possibilities of space but at the same time, the major plant engineering and construction complications. We tried to create emotion through a project that dealt with a simple layout but not trivial and considerable efforts in terms of lighting, research of materials and attention to technical detail / construction typical of our professional profile. What is especially satisfying result is the pre-existing stone materials blend and contemporary materials also pushed, managed through a creative process very graphic and contrast. The property was entrusted in its entirety to our thinking and this has led to a major achievement from the point of view of style and technology consistency. As evidence that even in small projects can achieve, with due attention and wealth, considerable results in terms of creativity and well-being. " 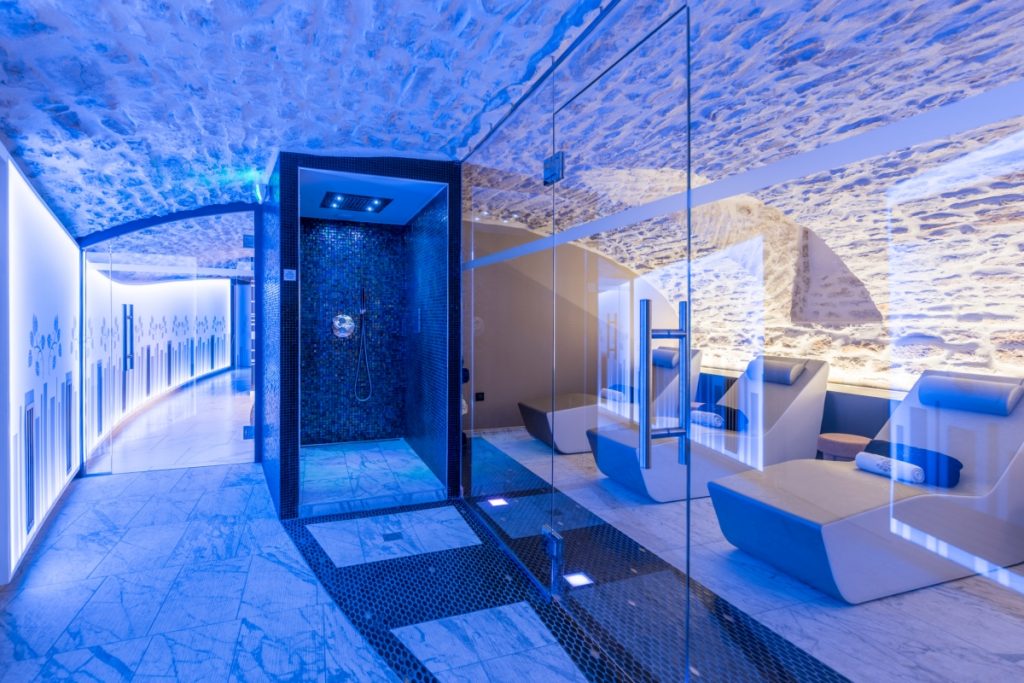 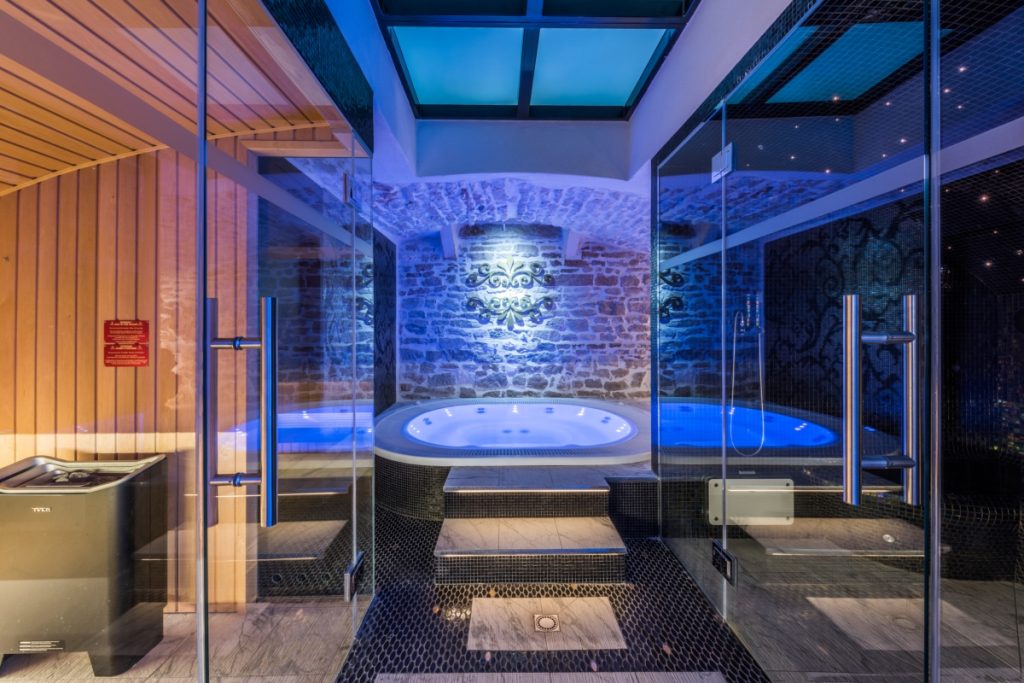 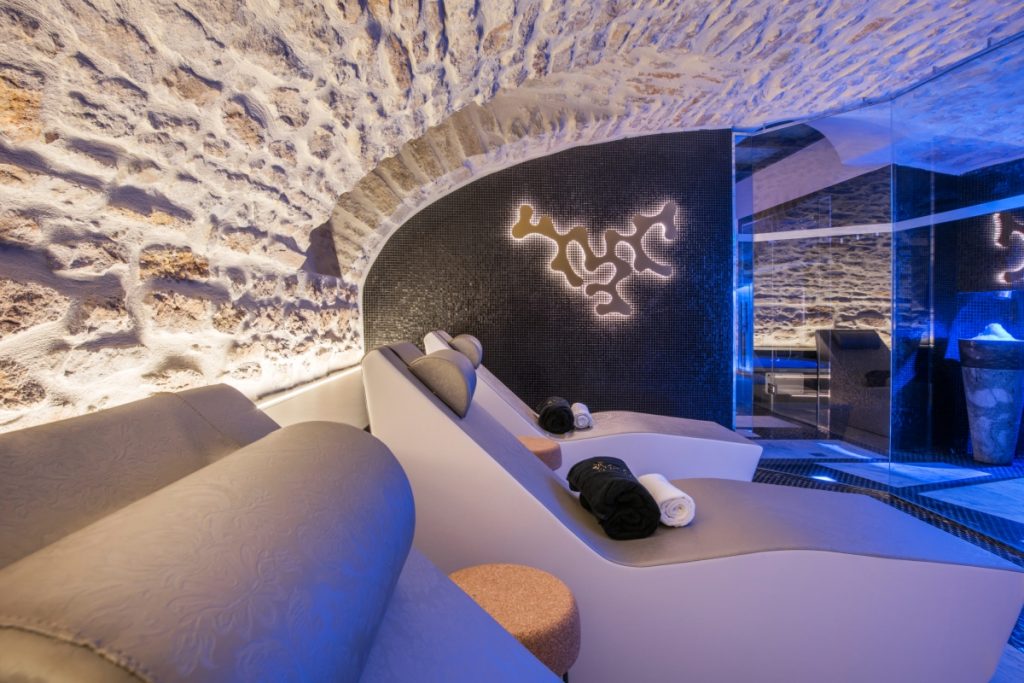 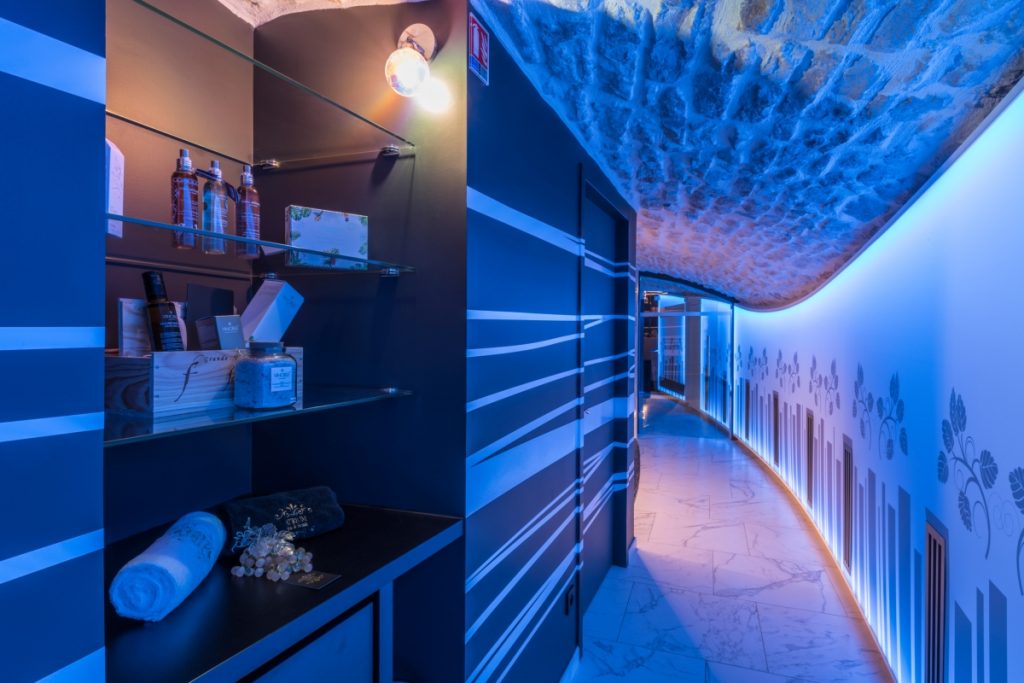 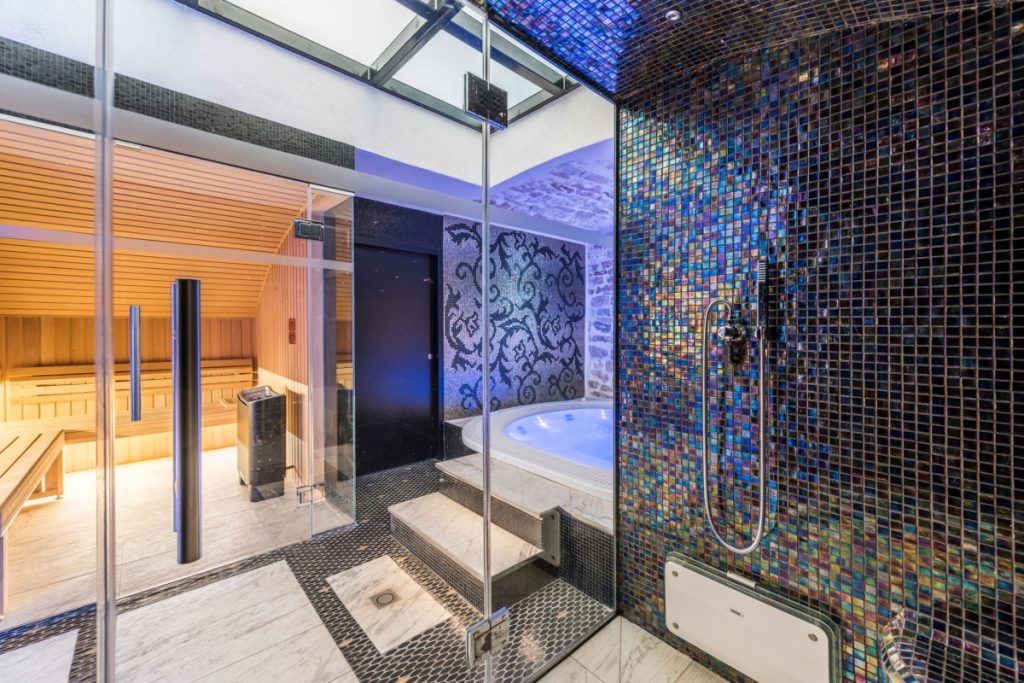 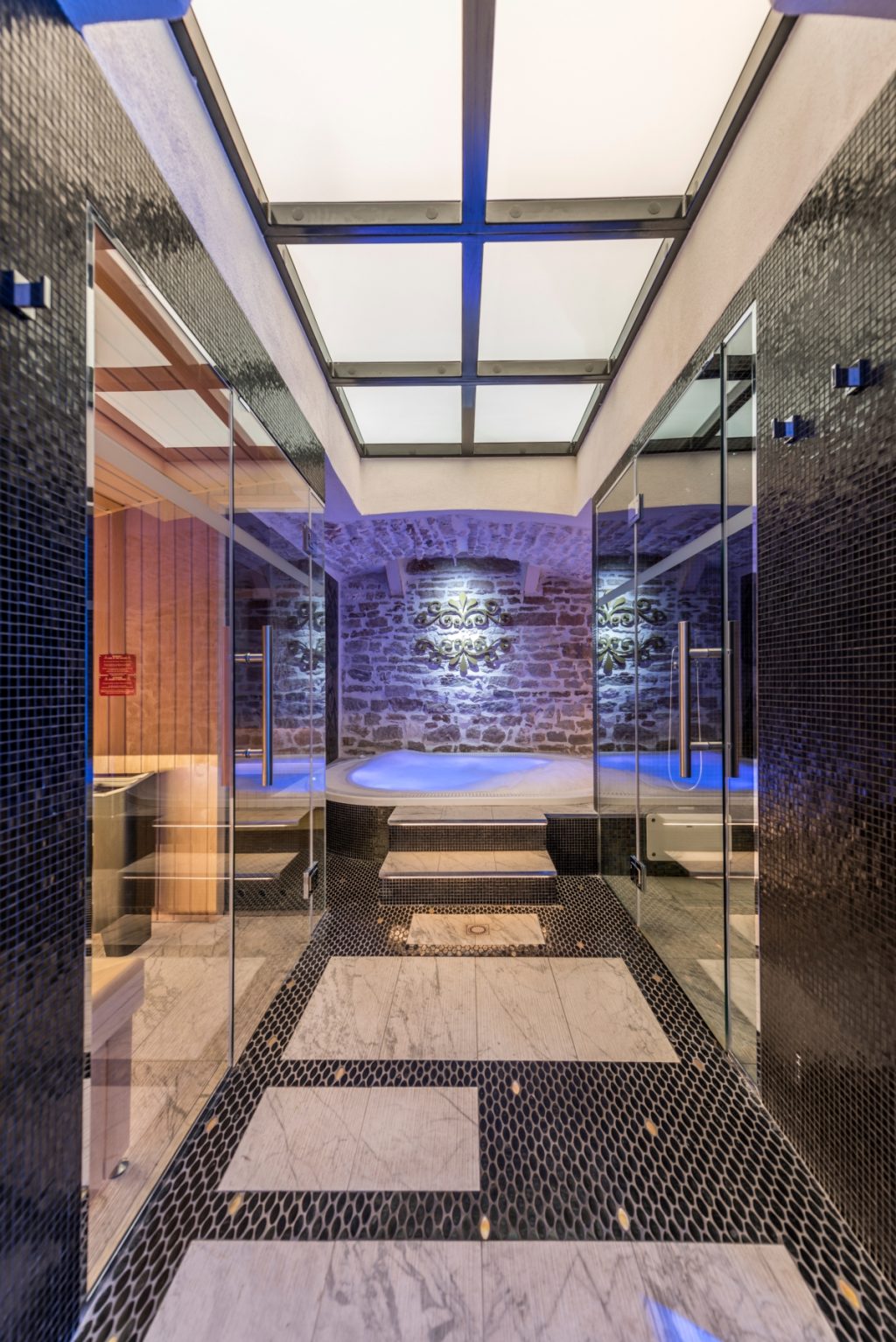 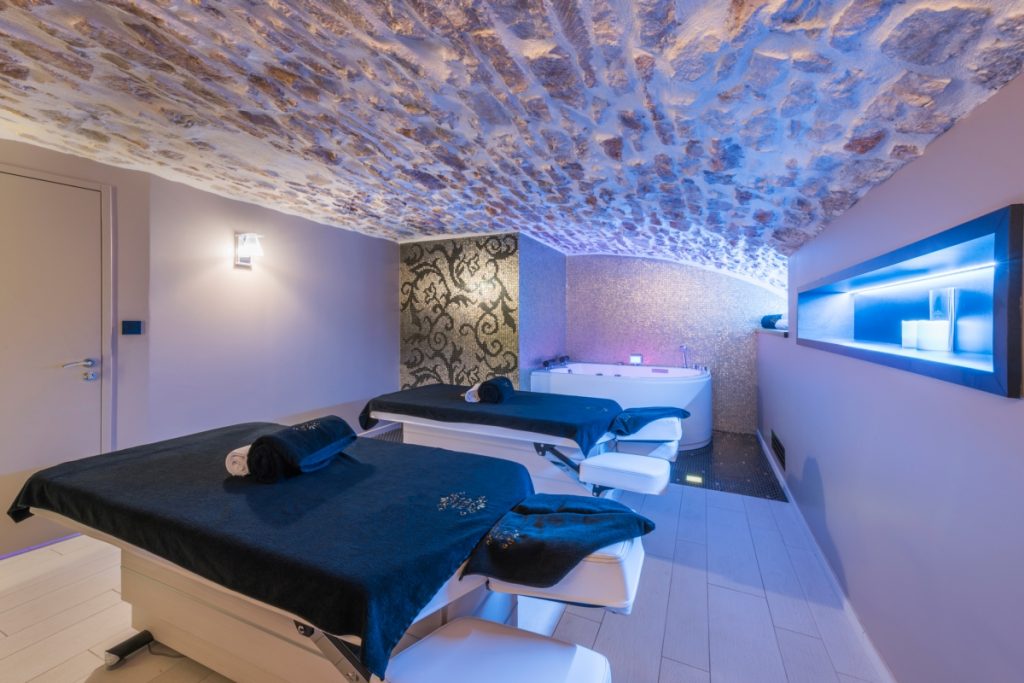 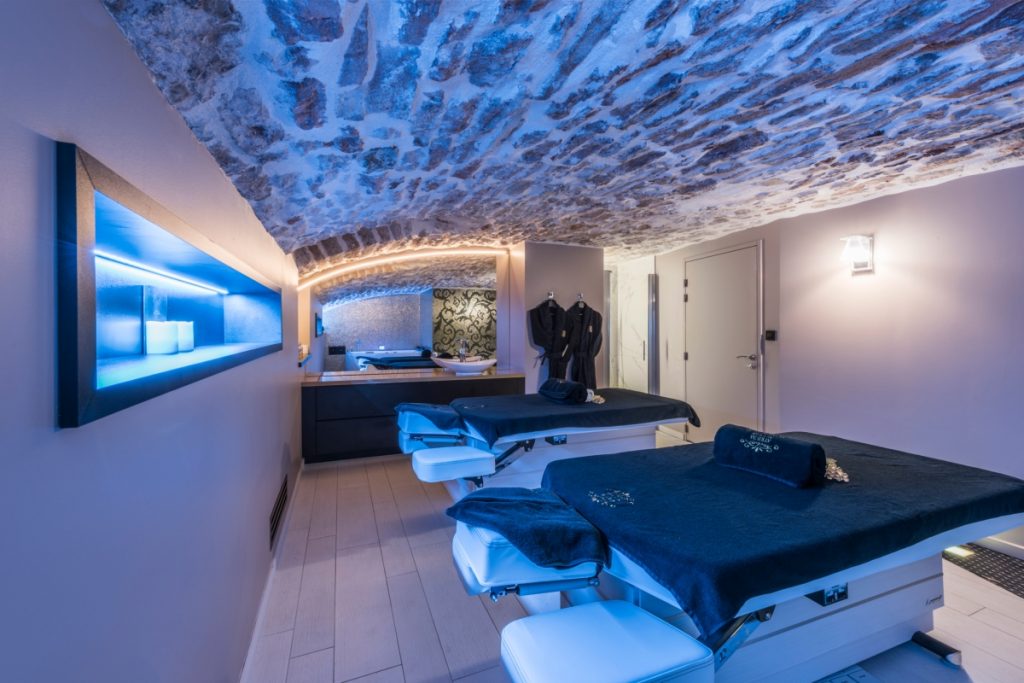 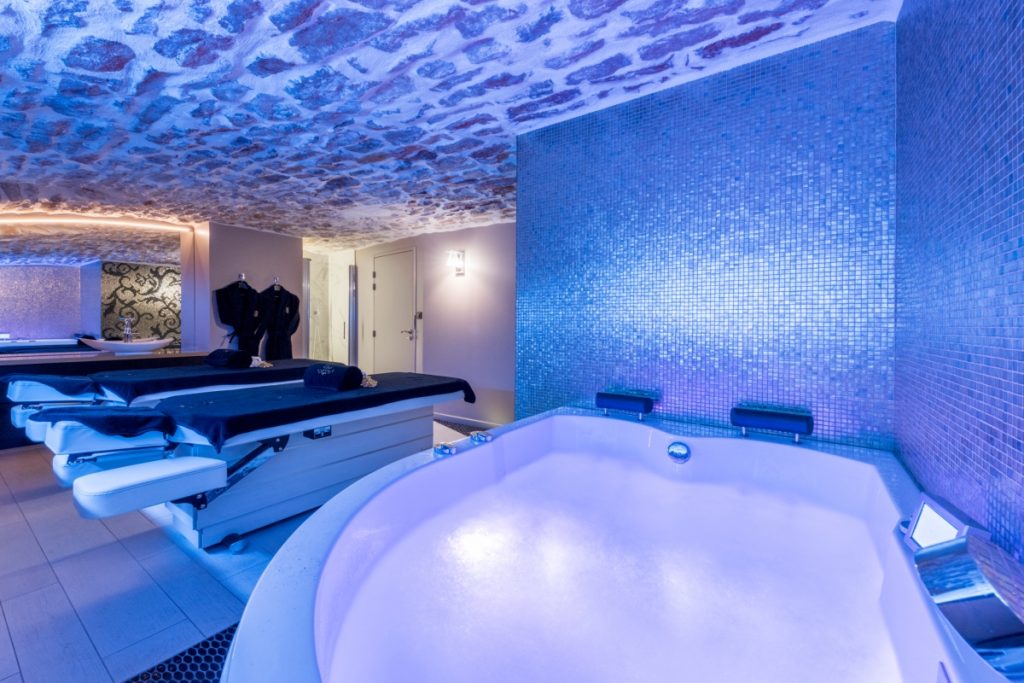 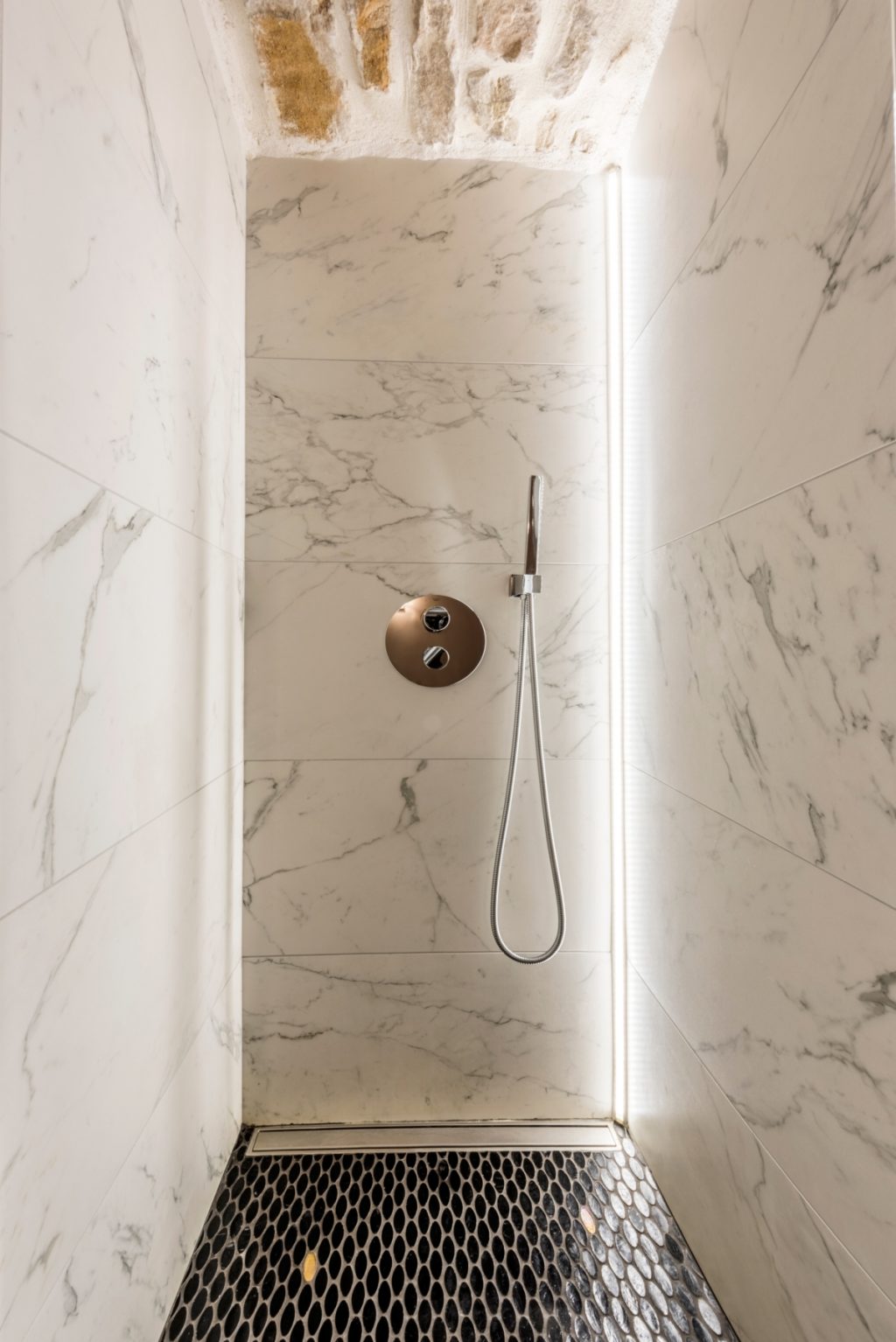 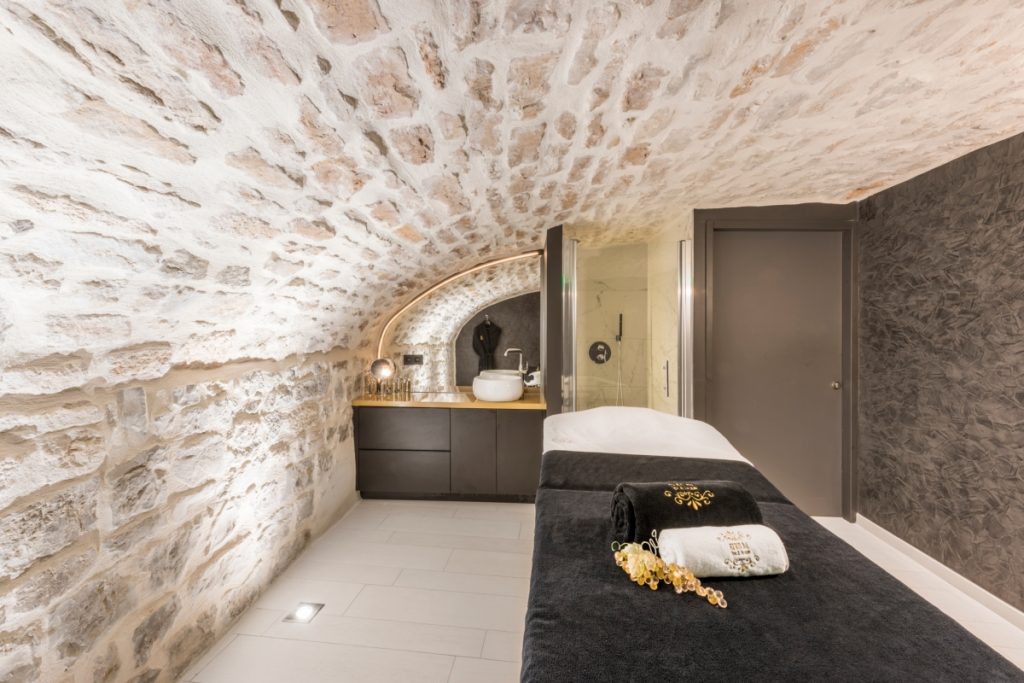 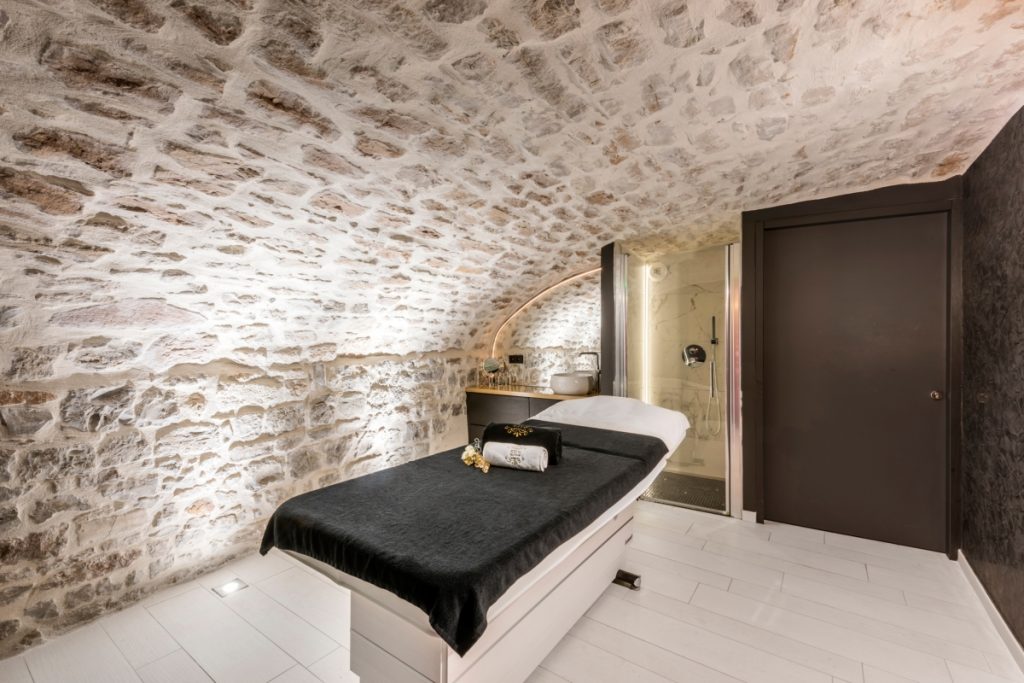 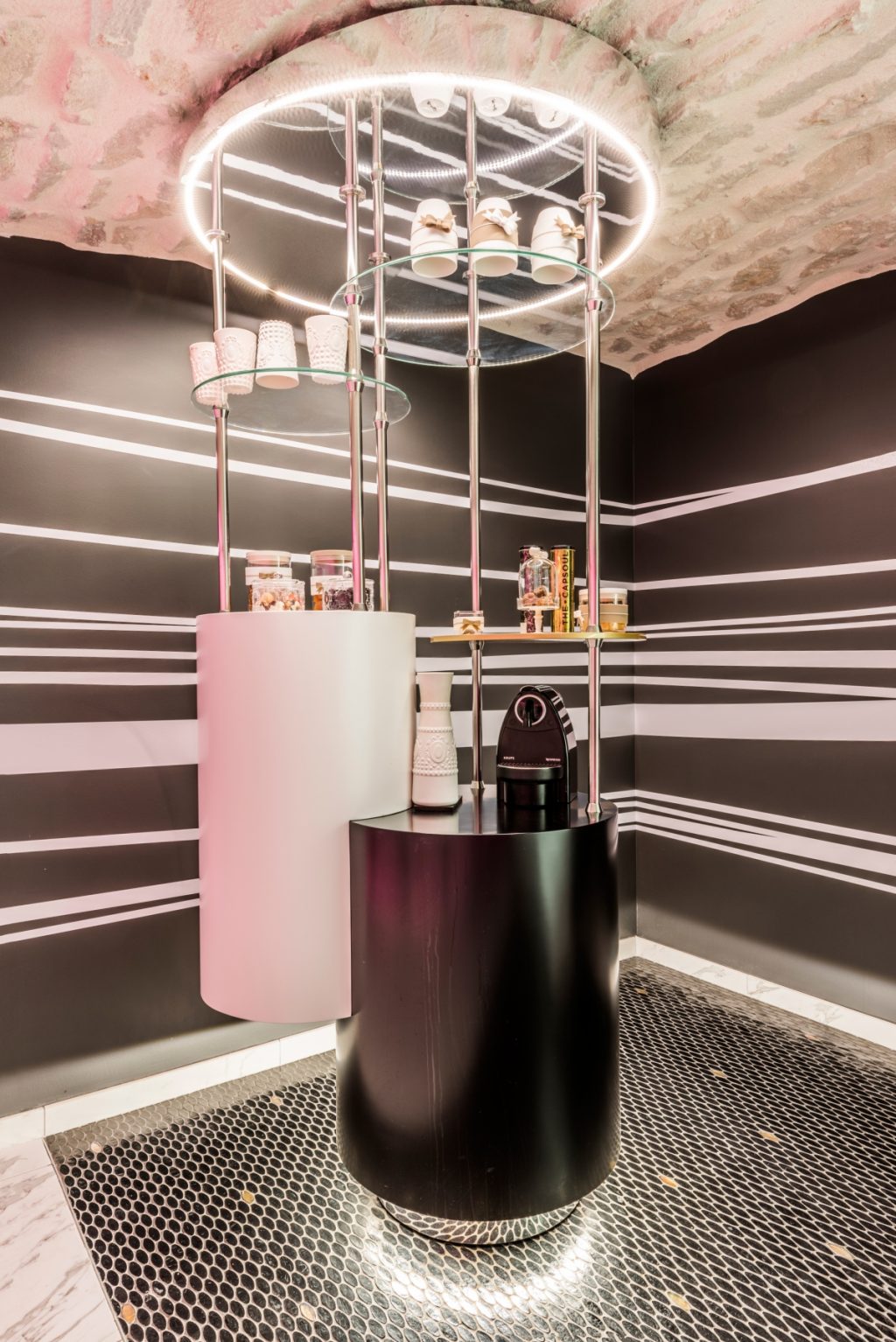 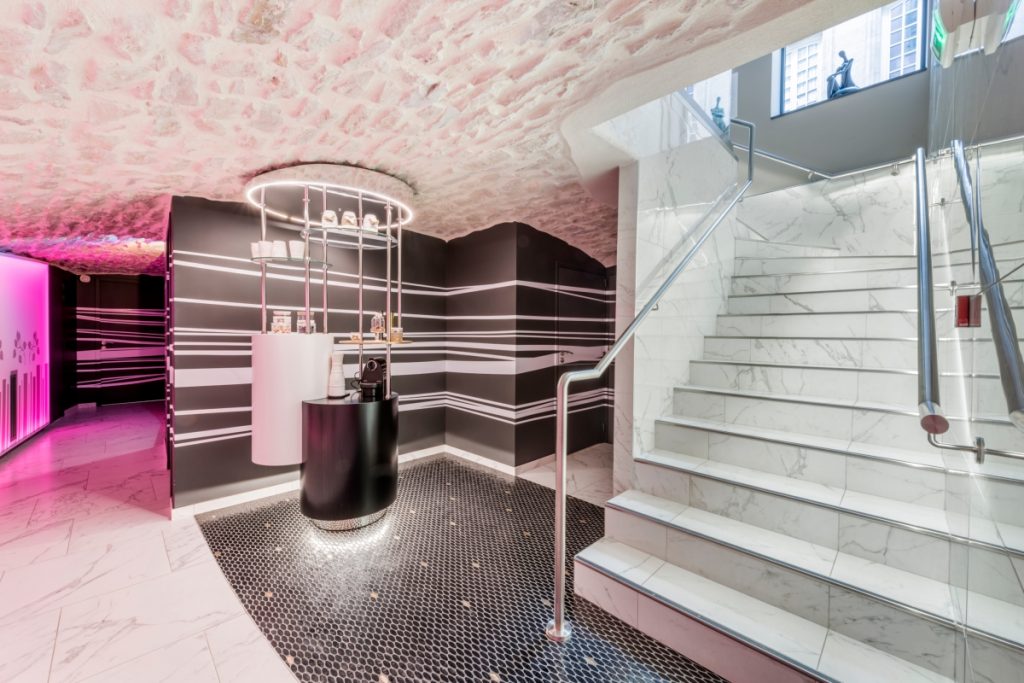 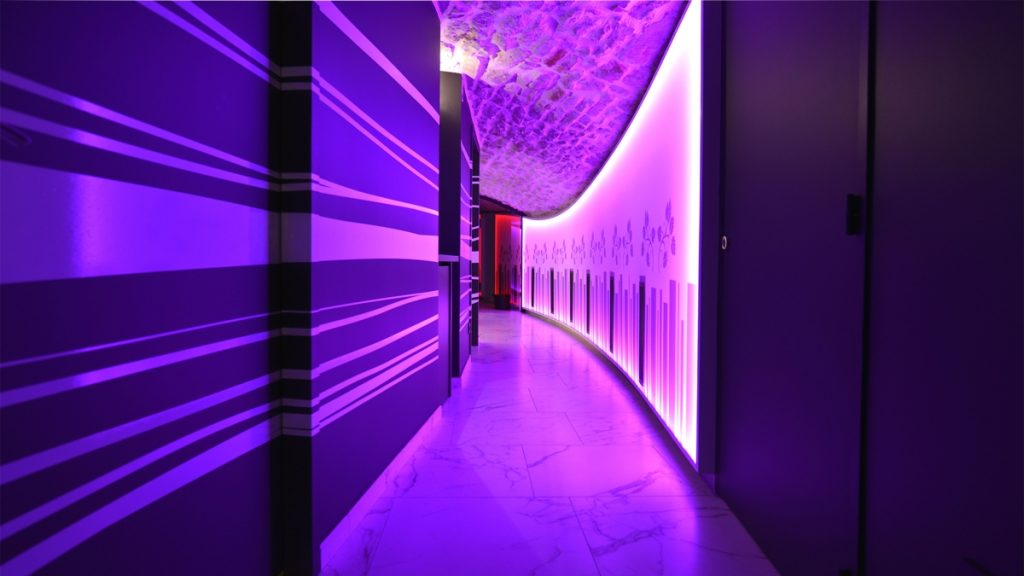 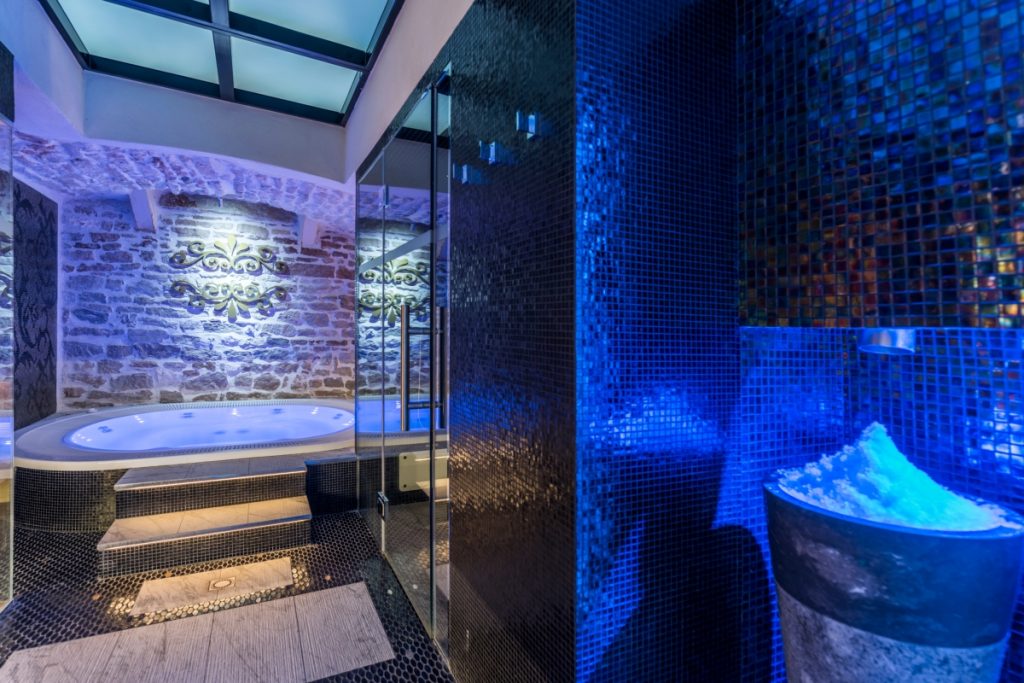 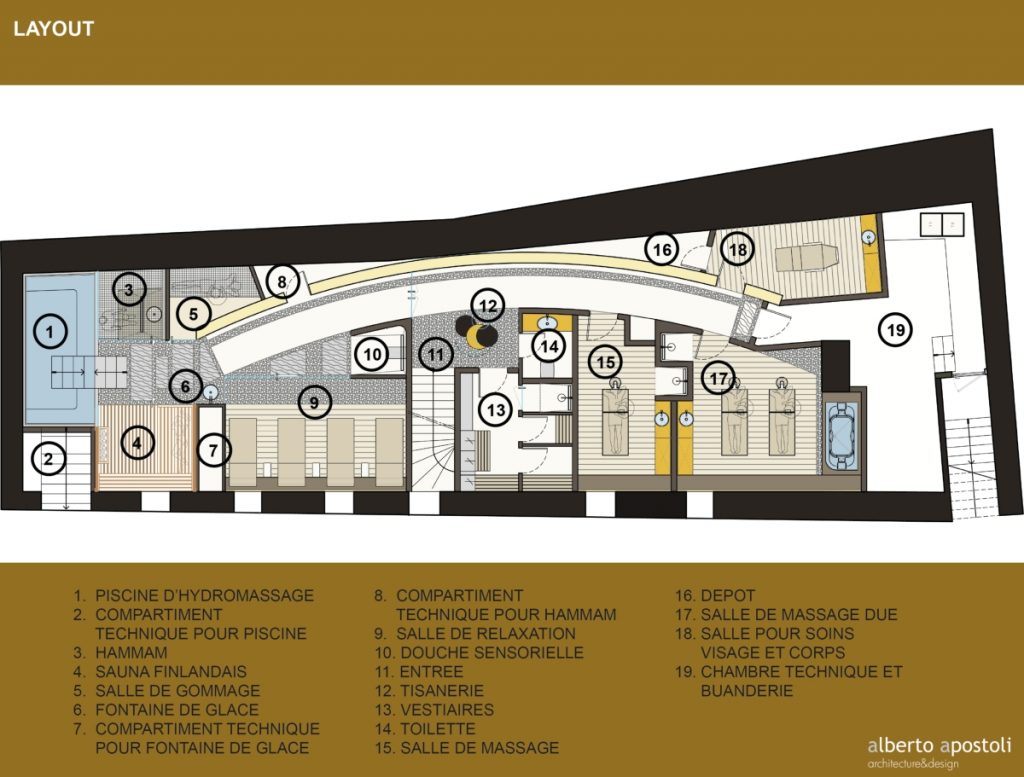