Refurbishment of an art nouveau house in Corato, in Puglia it has been modified: 2016-10-06 di Benedict Flowers

An important renovation and recovery intervention has brought an Art Nouveau house to its ancient splendor, on the second floor of a building that expresses the historical memory of Corato, an Apulian city north of Bari.

In fact, the house, located in the historic center of the city, was built between the 800th and 900th centuries, the years in which Italy was experiencing its cultural revolution, trying to educate the masses through art and taste. of beauty, and in which there was a tendency to give free rein to craftsmanship, contrasting them with mass production.

In the recovery of this real pearl of Apulian Art Noveau architecture, in which Baroque and oriental influences converge, the architect Esther tattoli, who was commissioned to renovate and renovate the building, tried to create a balanced mix between ancient and modern. 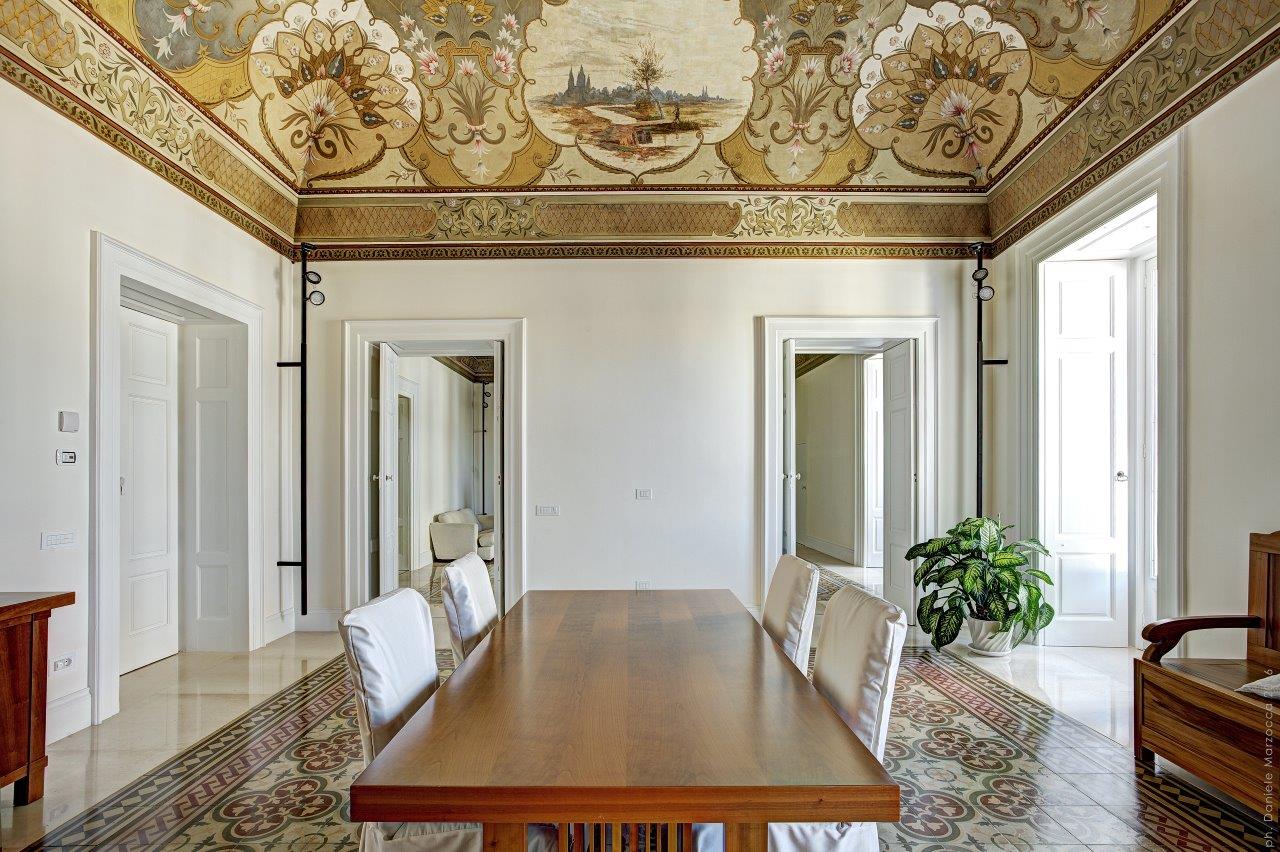 In fact, the architect has tried, where possible, to preserve all the original and characterizing elements of the house, enhancing them and making them functional and compatible with the new energy performance needs.

The house, former home of three noblewomen from Coratine, missionaries and very religious, presented a fascinating mixture of sacred and profane: next to pavilion vaults decorated with paintings depicting acanthus leaves and classical figures, we find putti in gold leaf and ex- vote. The house had a real internal chapel, in which an altar dominated, topped by vaults painted with floral decorations and glimpses of local landscapes.

Symbols of prosperity and auspiciousness, denoting a certain social status, alongside evidence of a deep religious cult.

The pre-existing floors were made up of tiles or grits measuring 20 × 20 cm, decorated with different patterns in each room. 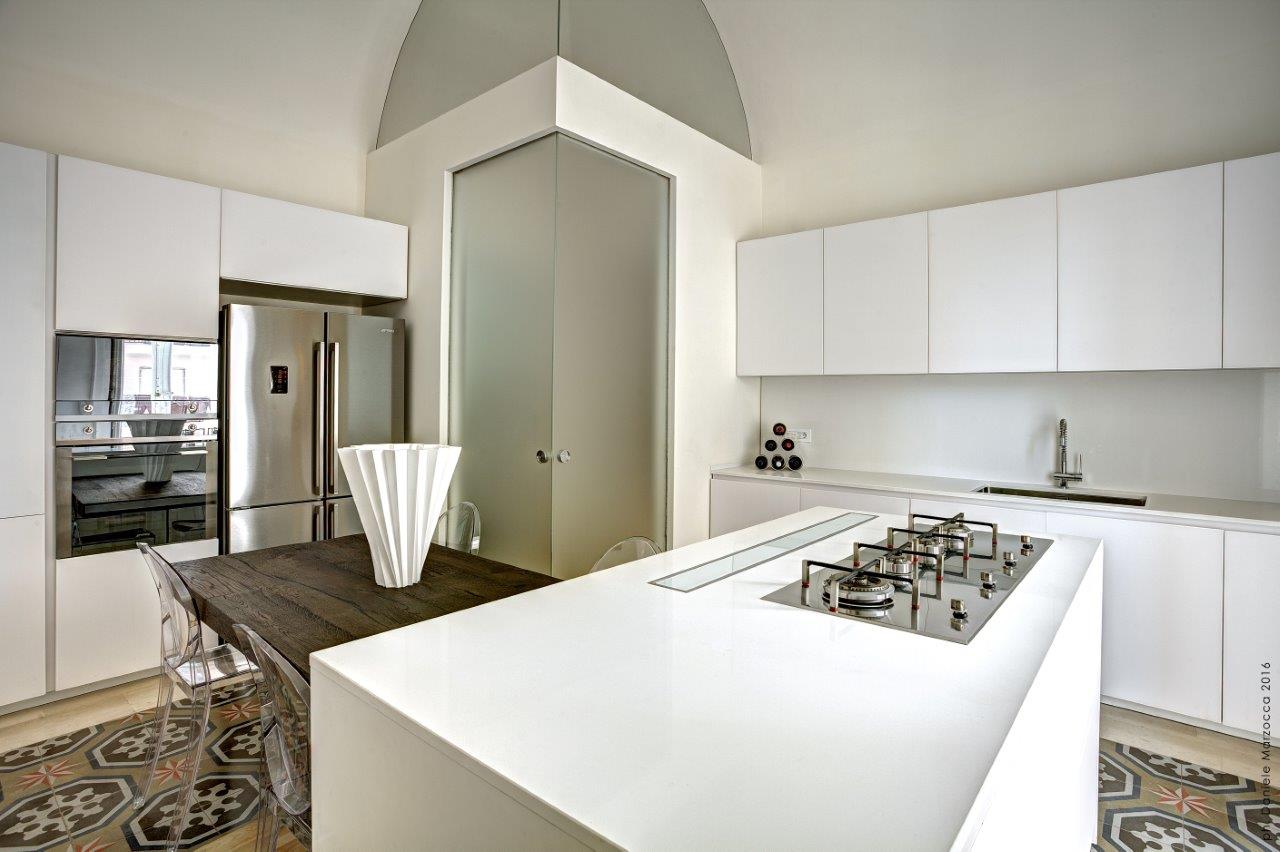 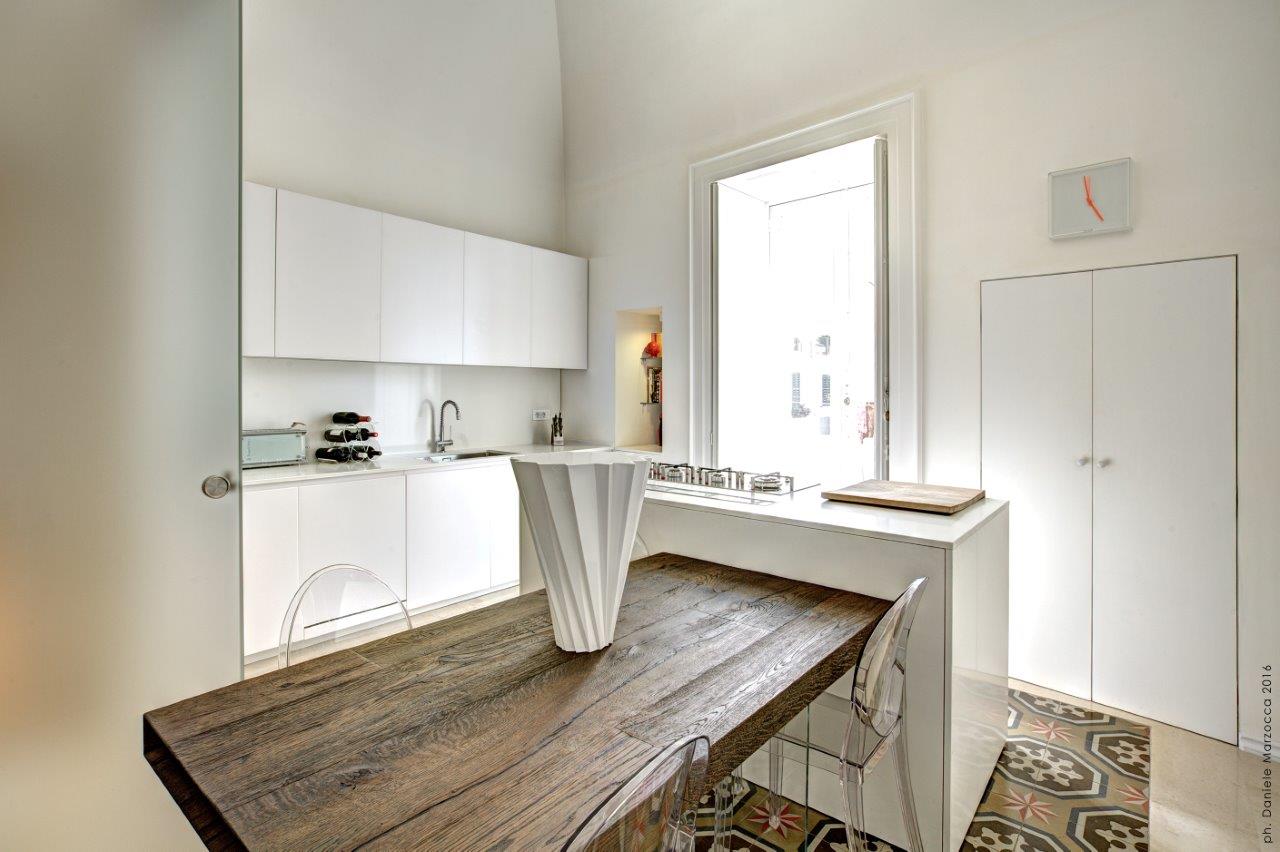 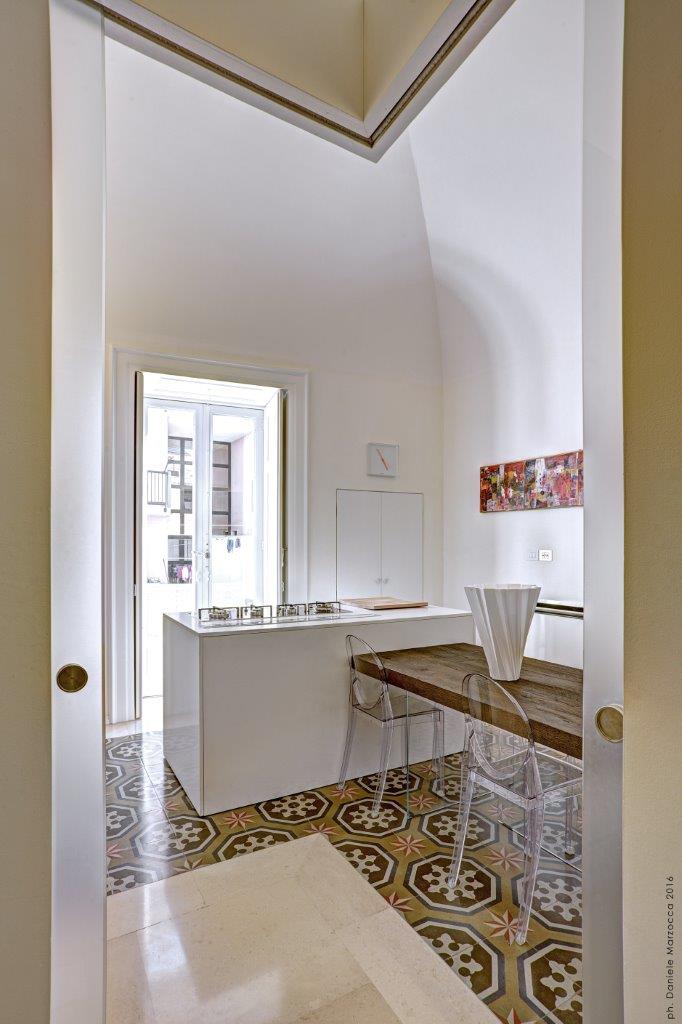 Esther Tattoli wanted to enhance all these extremely connotating elements, through a punctual work of recovery and philological restoration, which is integrated into the design of the new insertions characterized by a contemporary language, with essential lines and pure geometries, where traditional techniques and advanced technologies converge ; the one and the other elements, the new and the old, blend in the gold and silver glow of the decorated walls and the new lime putty coatings, and are recalled in the ocher colors of the ancient grits and in the luminous reflections of the new flooring in natural stone. 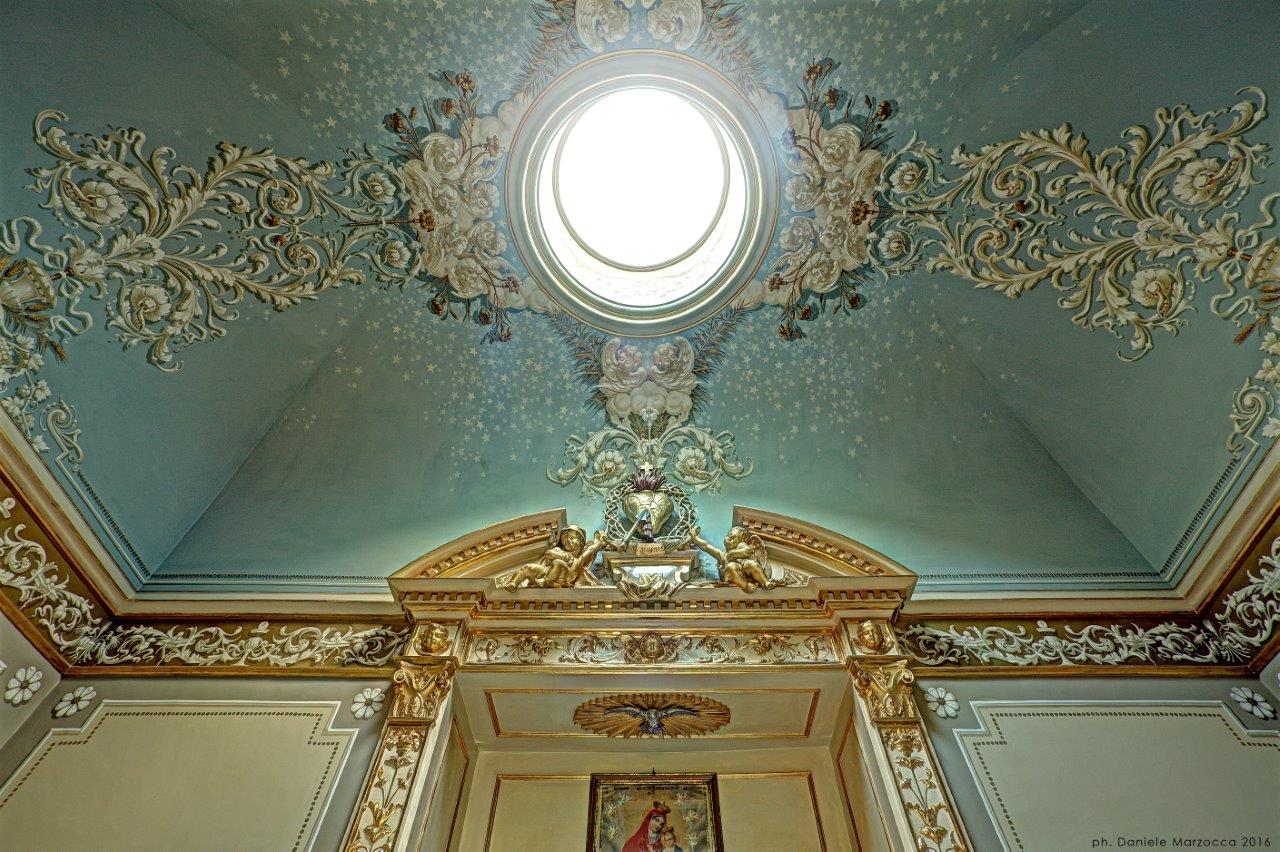 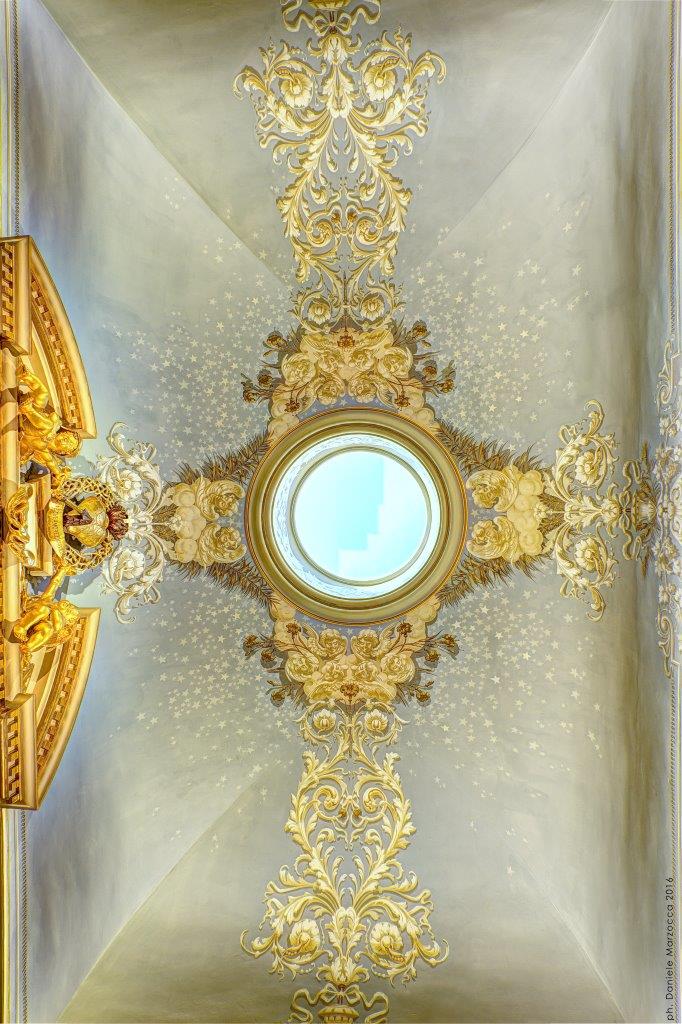 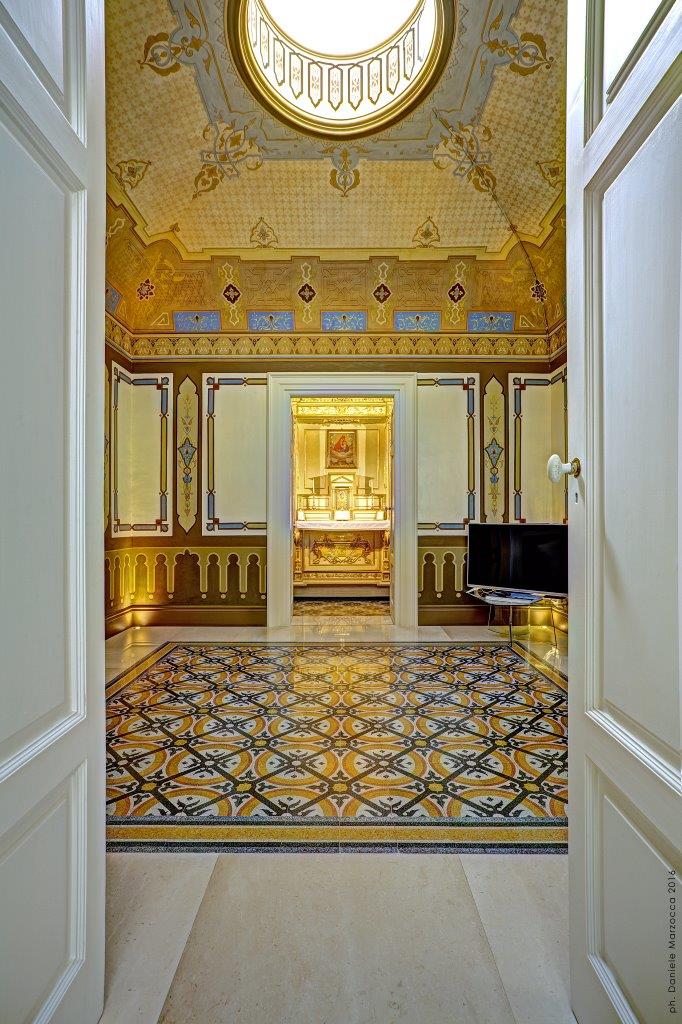 "The aim of the design intervention was to reconcile the functional needs of a modern house with the genius loci of a place where the signs of its history felt strongly present, in the religiosity of the chapel, in the Arab-like reminiscences of the Liberty decorations, in the the gracefulness of the wall paintings, in the decorative richness of the polychrome floors of the grits: a place of contamination and contradictions, local traditions and reminiscences from overseas, sacred and profane, ”explains Esther Tattoli.

The recovery intervention is the result of an in-depth research path by architect Tattoli, oriented towards the use of materials linked to the local construction tradition, such as slaked lime and natural stone, eco-sustainable, transpiring and compatible with the materials present in the house, in order to reconstitute a profound unity of the architectural organism. The aim of the project was in fact to continue to be the memory of a close relationship with the Apulian territory and with its history, even if reinterpreting it in a contemporary and minimal key. 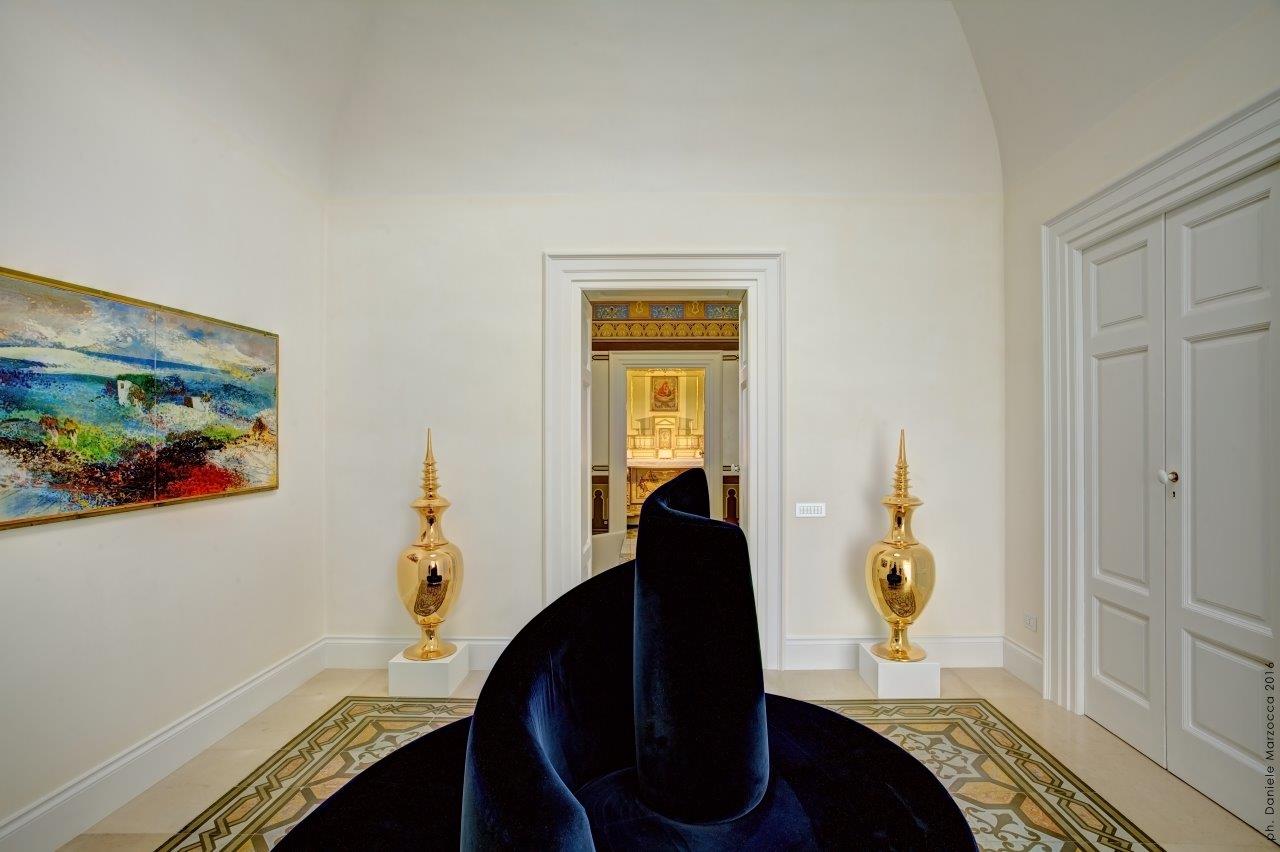 As Esther Tattoli states, “a house must be a representation of the personality of those who live there, of their aspirations, of their way of living intimacy and hospitality. An important phase of the project is the initial introspective investigation of your client, understanding how he wants to feel in his space and how he wants to show himself. The gold color is repeated among the ancient decorations of the house, flickers among the paintings of the vaults and dominates the space of the altar, merges with the intense yellow of the grits and rigorously marks the geometries of the liberty decorations, returns to the contemporary lamps of the bedroom. bed, and in the pigments of the slaked lime that covers all the surfaces of the guest bathroom and which, even more brilliant, illuminates some walls of the personal bathroom of the hosts; the gold color expresses the sophisticated style of the hosts, the elegance of the receptions, the attention to detail ".

Natural light plays a primary role in this project, merging with artificial light. In fact, in the central rooms, the ancient skylights have been preserved, which integrate perfectly with LED lighting given by a suspended circular track system. 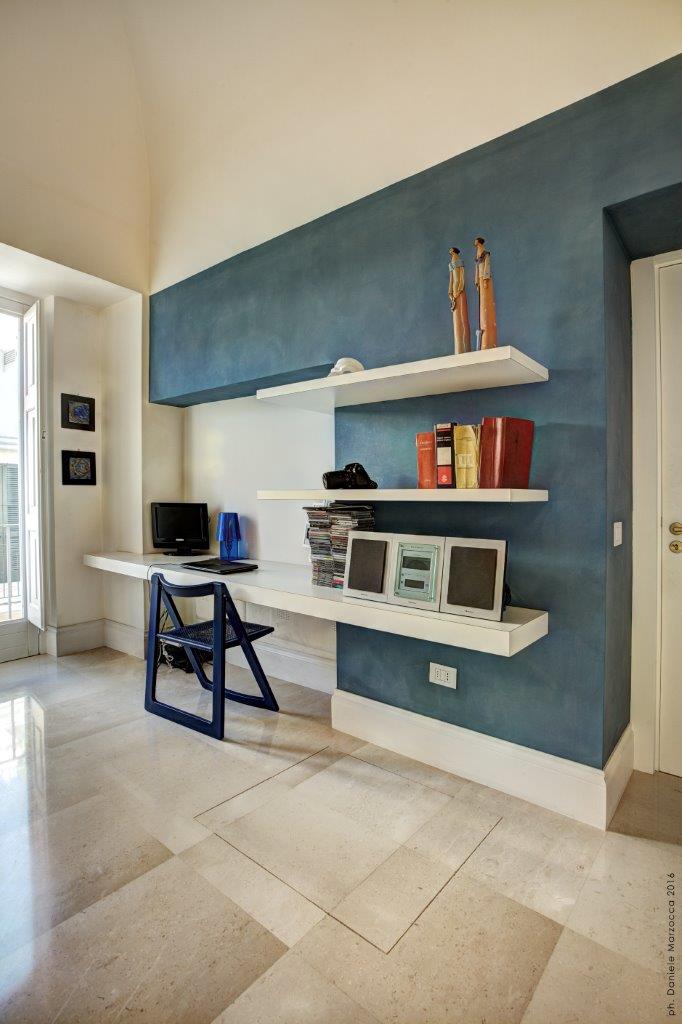 The niches in the home have been recovered and turned into bookcases, sober, clean lines, where each space has been rationalized. 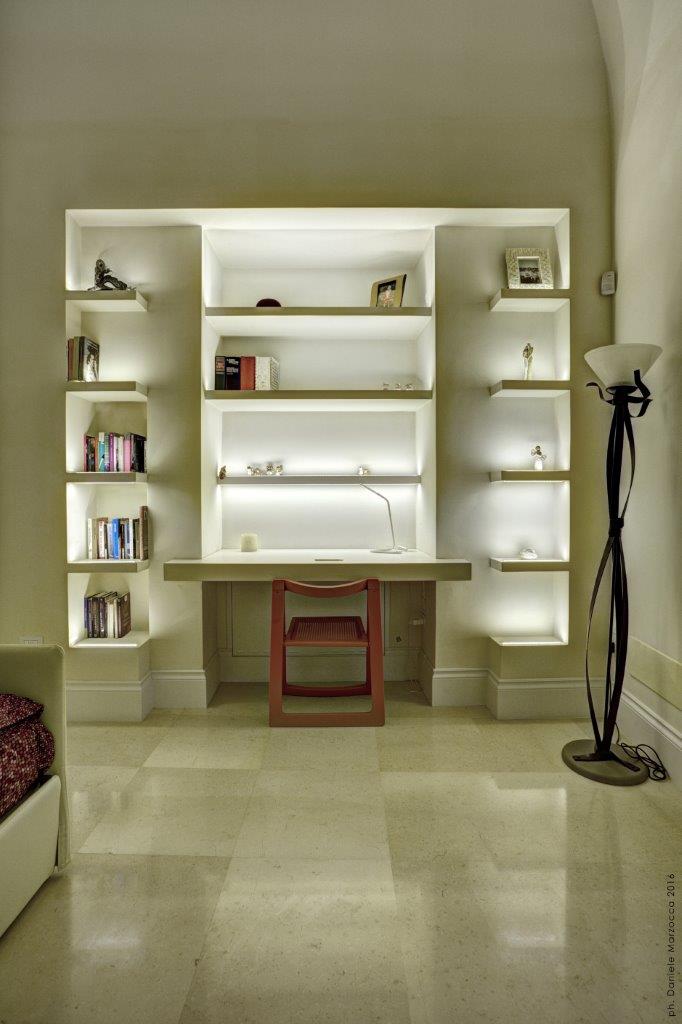 The niches in the house have been recovered and transformed into sober, linear wall bookcases, where every space has been rationalized and reused. The modern style of the interior design, made of essential, minimal and elegant pieces, gently contrasts the decorative opulence of the historical elements, enhancing it. Some insertions of family furnishings also give warmth to the rooms and trace the lines of a new story.

The intervention carried out by Esther Tattoli not only saw the renovation of the housing unit, but also the energy efficiency of the same. The entire project followed the rules of an approach oriented towards environmental and social sustainability: from the use of natural materials and produced by local artisans, to the recovery of the ancient fixtures, enriched with double glazing, barrier to solar rays, bad weather and water.

Furthermore, solar collectors were applied on the roof, capable of producing domestic hot water, and flow reducers were placed in the service areas. 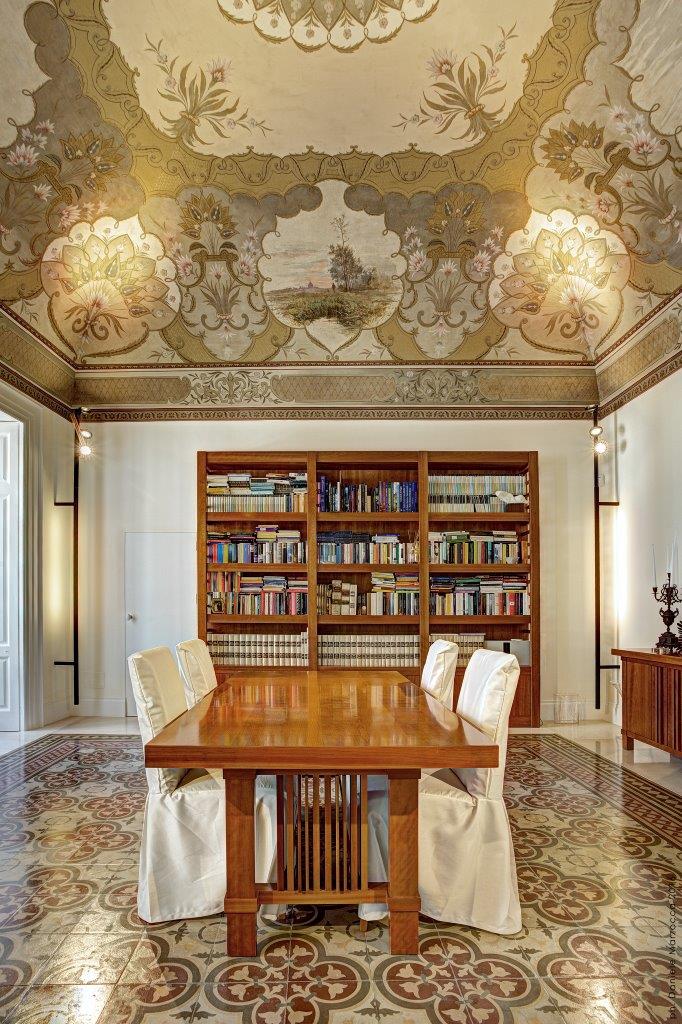 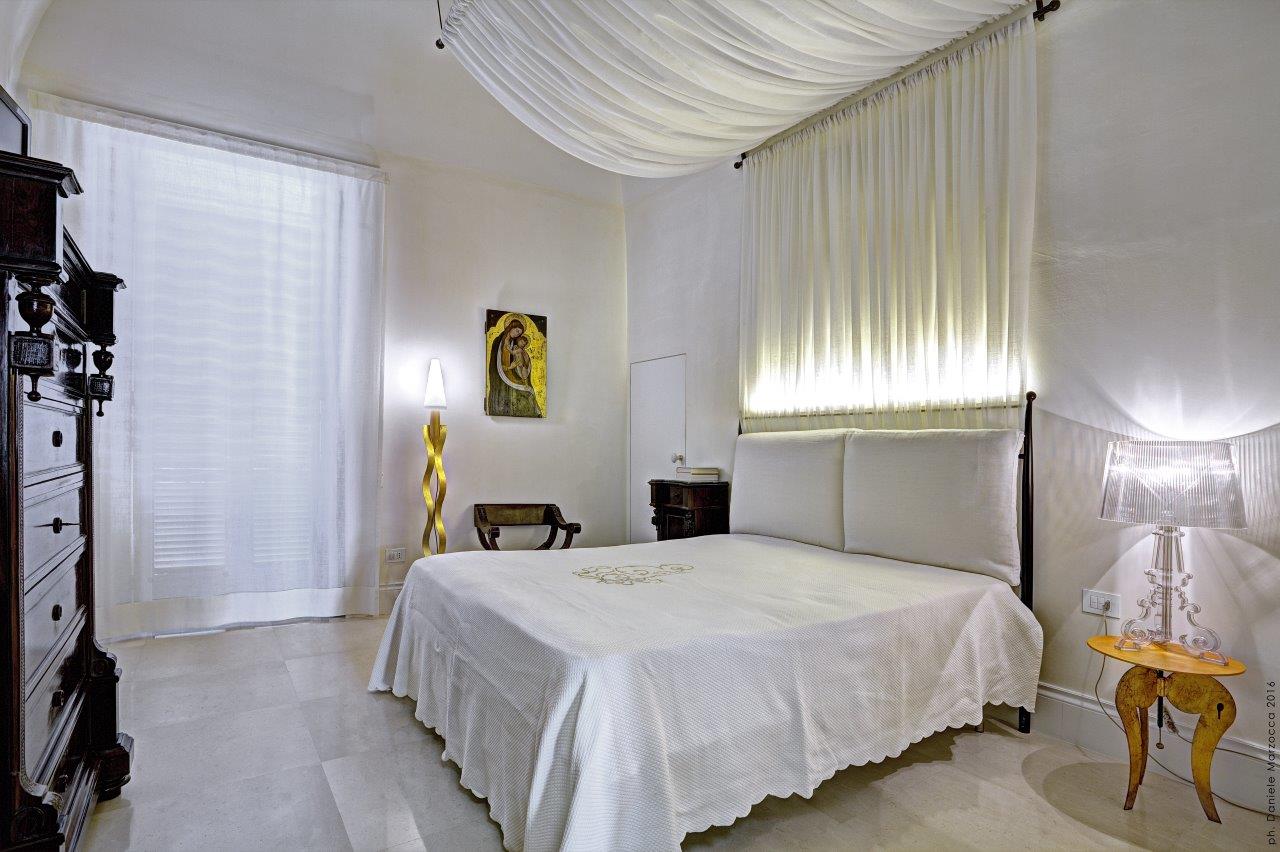 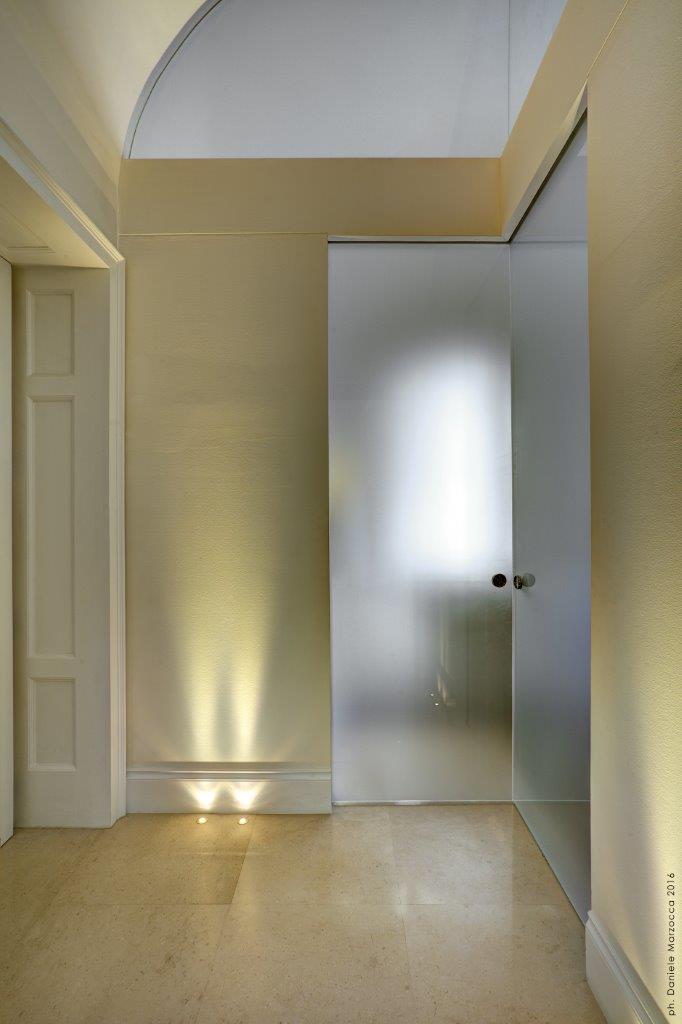 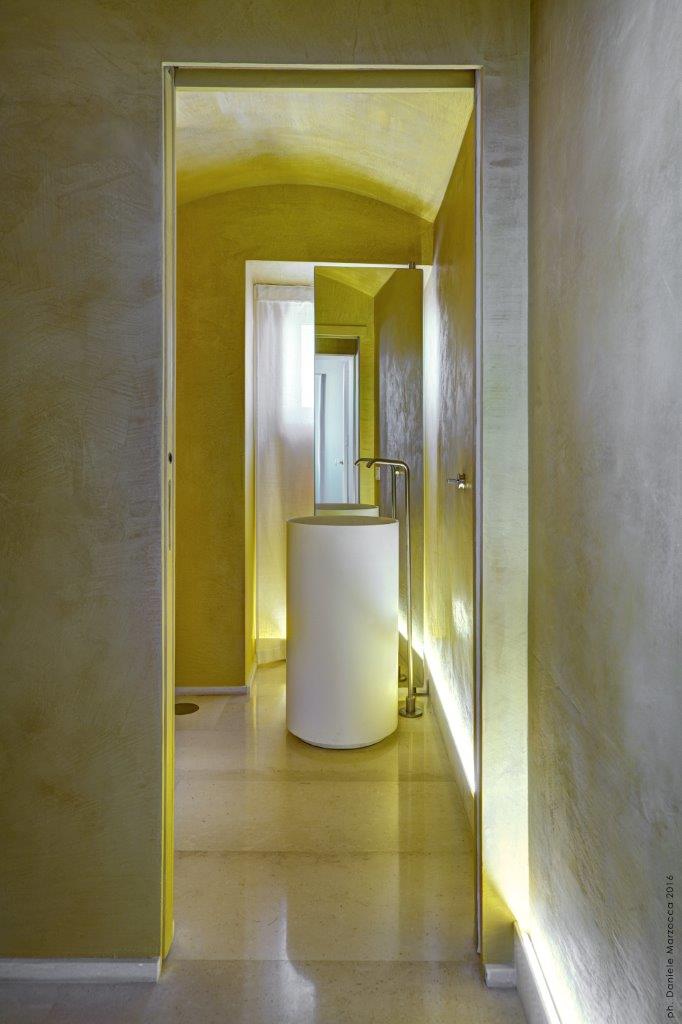 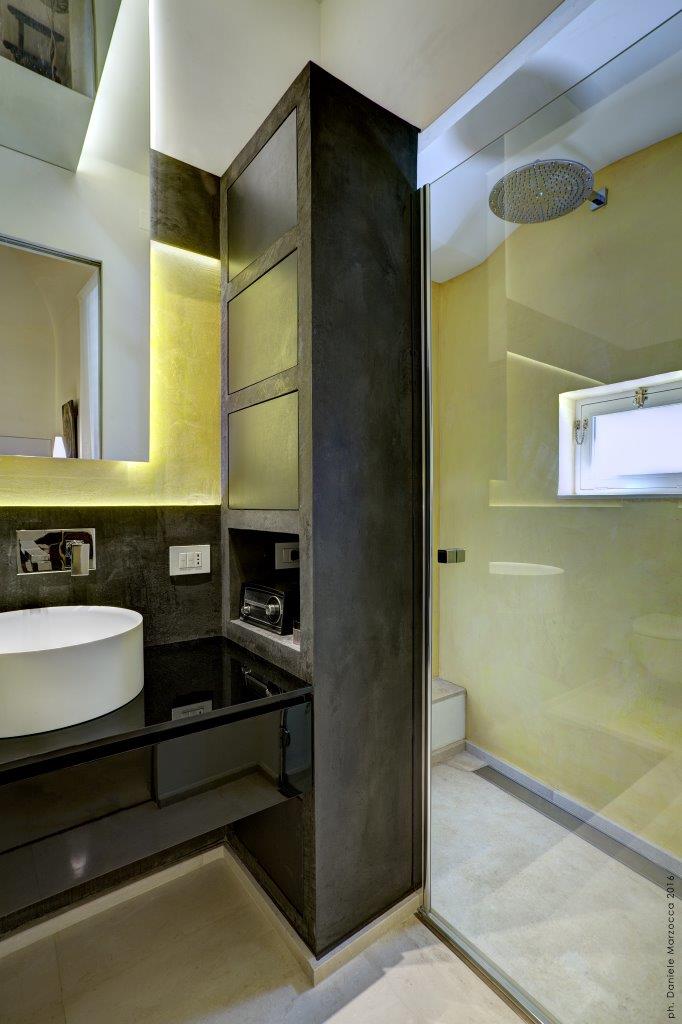 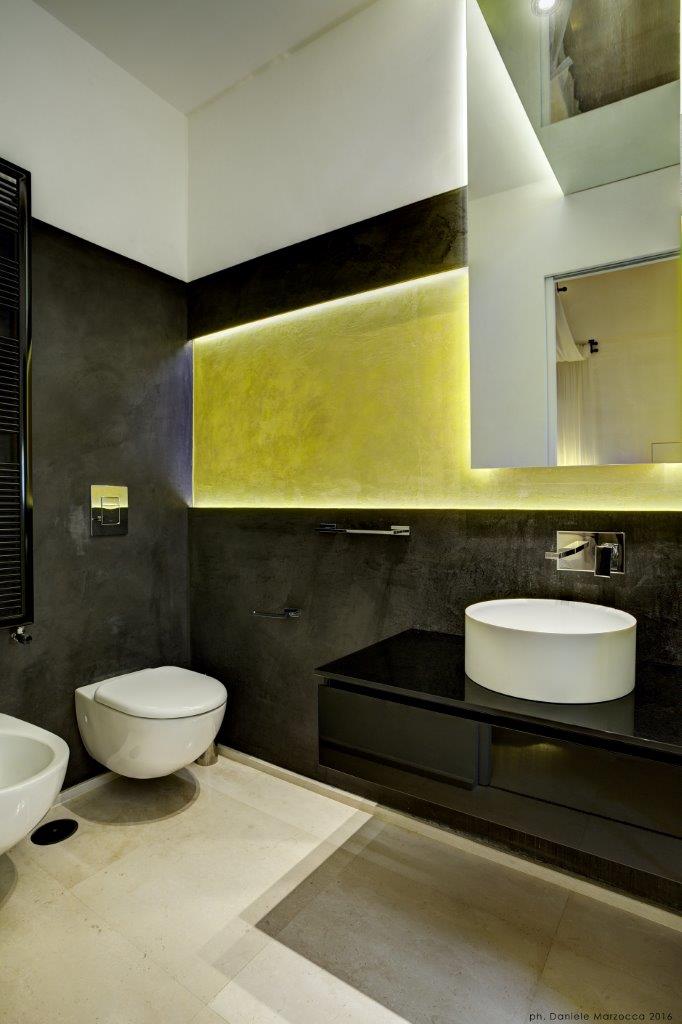 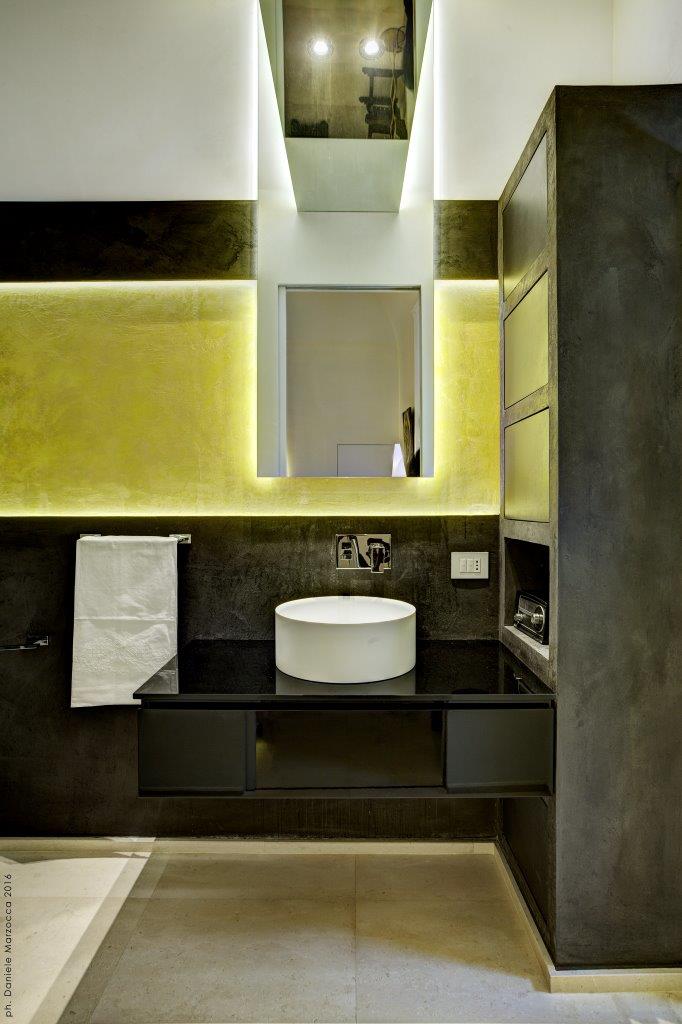 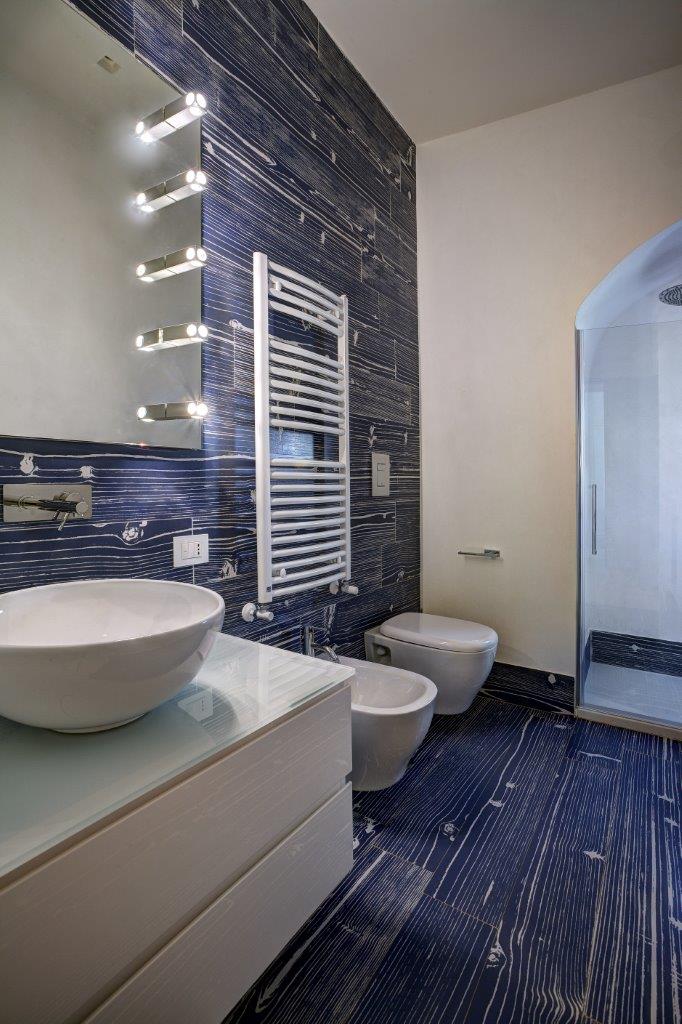