From September to 19 13 October doors open at the Palazzo della Gran Guardia: architects and citizens compared to the collective good. Pending the conference with Armando Massarenti, Vittorio Gregotti, Luca Illeterati and many others.
It opens Thursday 19 September in Palazzo della Gran Guardia 'Padova 2013 Architecture', Event organized by the Cultural Architecture in collaboration with the Municipality of Padua forget to redevelop the six areas of the city, some of which have no urban and landscape quality, involving the citizens with workshops open to the public, debates, exhibitions and conferences.

A laboratory open houseTo promote interaction between architects and the community, and imagine together a future development for the city, based on the recovery and enhancement of existing works.

Three of the areas chosen are located at the gates of the city: the east entrance of Piazzale Stanga and Via Venezia, the north gate of the Borgomagno and Bassanello south. "Currently are considered crop areas, could become the connection zones, redefining public spaces and road traffic, creating green areas to promote social aggregation," explains architect Cinzia Simioni Association Of Architecture.
The other three are the barracks located within the city, largely unused. "I am and will be of major gaps, you need to think about a possible recovery for the community," says Cinzia Simioni. It is of Prandina and Piave barracks (both located between the medieval and Renaissance walls of the city) and the barracks Prato della Valle.

Each of these areas has been entrusted to an architect - German Jan Kleihues and Uwe Schröder, Spaniard Guillermo Vazquez Consuegra and Italians Monestiroli Antonio, Gino and Carlo Malacarne Magnani - respected professionals proponents of works and projects of high architectural value.
Their task is to present projects with a high index of applicability to be delivered to the city, supported by twenty-four young architects.

The inauguration, scheduled at 18.30, Provides for the presentation to the public and to the press of the six areas interested in upgrading, with the presence of the Deputy Mayor Ivo Rossi, Councillor town planning Marta Dalla Vecchia, the architect Franco Fabris, head of sector urban planning, General Enrico Pino military command of the Veneto region and the representatives of Alessandro Tognon Architecture and Cynthia Simioni.
At the entrance to Palazzo della Gran Guardia it has exposed a scale model of the city in 1: 1000 realized by thirty children's artistic Liceo Modigliani, who will receive a certificate of participation and will join the architects during the project implementation.

From the 20 22 September, citizens can leave their opinion on selected areas, Answering the question postulated by Aldo Rossi in 1968: "What do the old city?".
"We want the city of Padua resume to take care of herself, from the exploitation of some areas forgotten, and we invite citizens to participate in the event, helping to raise public awareness on an issue of paramount importance", He explained Alessandro Tognon.

From the 23 28 September there is the architects' workshops; They will work on the projects from the 9 18, and they will open doors to encourage interaction in citizen participation. In the evening every one of them will attend a conference to highlight their modus operandi by presenting some of the most significant works.
The 28 18 September at the six projects will be presented and will remain on display until 13 October.

And the 4 11 October scheduled two round tables with writers, filmmakers, philosophers and journalists.
"Padua 2013. The Northeast told ", appointment title of 4 October, sees the same table Matteo Righetto, writer and director of the Twain School; the writer Francesco plate; the director and director of Euganea Film Festival Marco Segato; Antonio Maconi director of the Festival City Company and Daniel Lake, CEO of Lake Spa. Moderated by the actor Andrea Plumes.

To unite them is their concrete commitment to carry out projects and bring culture and innovation in the Northeast.
"Padua 2013 culture" the appointment on Friday October 11 with Armando Massarenti, journalist and director of the cultural supplement IlSole24ore -Sunday that will bring in Padua his Manifesto of culture; Luca Illeterati, Professor of Theoretical Philosophy at the University of Padua; the architect Vittorio Gregotti, the director of 'Northeast Europe publisher' Filiberto Zovico.
Moderated by the journalist of the newspaper The architecture Julian Adda.

Finally the two meetings organized by the Provincial Craftsmen, supporter of the event:
24 September: 'The desert city. The craft shops in search of new spaces', Federico Della Puppa speaker, lecturer at the IUAV in Venice.
1 October: 'The wood in construction' with Dr. Andrea Zenari, Institute of Lazzari-Zenari wood technologies. 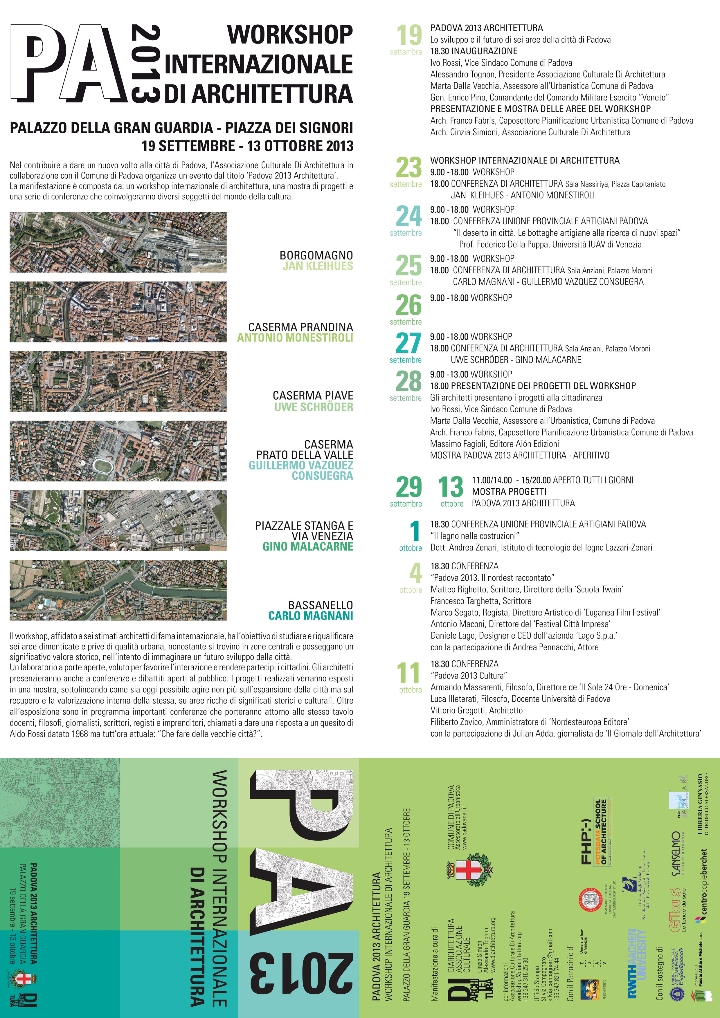