"Where do the wild roses" _ monumental Need to Servino it has been modified: 2013-05-03 di Mario Ricci (AtelierTransito)

"Always choose the most difficult" Mother Teresa of Calcutta

Aphorism or aphorism  sm Maximum, sentence, definition, which in short and juicy words summarizes and contains the result of the above considerations, observations, experiences, [...] which condenses - similar to the ancient Latin phrases - a specific substance or a more general philosophical knowledge or morality, as well as a wise rule or a practical rule of life: collection of aphorisms; speak in aphorisms.

"The design is an aphorism"

Monumental need, the latest book by Beniamino Servino, is a book of signs: made up of aphorisms written with shapes and colors, and written with words. Published by the Lettera 22 publishing house in Syracuse, it is a refined object, easily comparable to certain refined artist's books - the graphic design is by Servino himself -, in it two overlapping scriptures, untranslatable one into the other (the term "language", in fact, can be used in this sense only as a metaphor). Scriptures, moreover, which relentlessly translate into the contemporary world, a sort of archetypal tradition. They are not drawings that illustrate, but that dig and engrave. Apologia for the stratum: in these drawings the architect from Caserta uses his own modus operandi, through a litany. Disturbing, free and anarchic: they scream their doubt about a reality that is flattened and weak in energy. Drawings as daily exercises to refine one's senses and one's interpretative tools, in which play and measure, reproduce a horizon imaginary above the real one, within which visions wander relentlessly: a horizon of the hand. An amalgamation of technique and poetry, these drawings always reveal their references. "Then the design becomes a poster"

In translating his aphorisms in other languages, or in reproducing the enlargement of the detail of another design, the separating layers or rewrite them with digital signs, Servino loses something and find something else. "I like it - says Benjamin Servino - Feel the text I love through my voice, it's a way to take possession of an object, to make it right through the rewriting ". The tradition, evidently, is not in this case, something to return to, but an objective to pursue, to be built layer by layer. It is constantly translated and betrayed: it is desired. Servino seems to offer (and a-reason) that the contemporary, being contemporary, does not mean co-affect perfectly with their time, but rather, it means to be outdated, inopportune in space and time. Untimely, like someone who wants to "take a stand" with respect to the present, without adapting to its demands, and precisely for this reason, thanks to this anachronism and this gap, he is more capable than others of perceiving and affirming his time. Untimely is the desire. This is how he explains the construction on scraps or fragments, and the insistence of his work on the edge, from which, through the breadth of his orbit, he is allowed to see more. This is how his progress is explained by "zig zago", between the cultured and the popular, between childhood and maturity, crossing all the "layers". And his drawings are made of layers, like reality, of a succession of transparencies. And note, that transparency is here, not what is perfectly clear, but rather, what is clearly complex.

The architect is a builder who knows Latin. 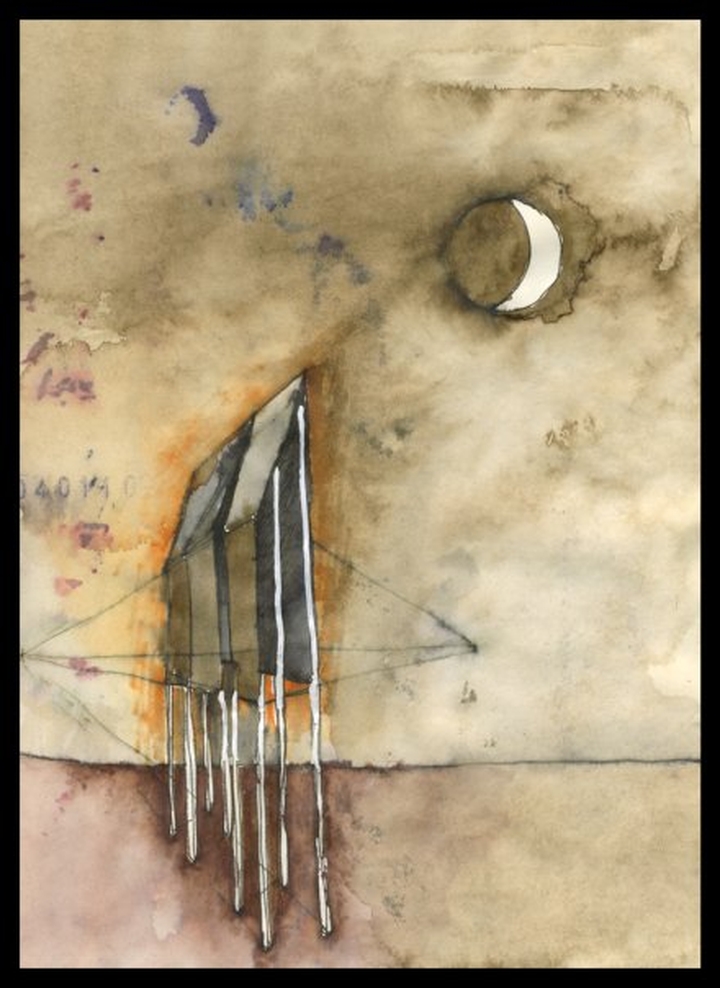 Tradition and monumentality are therefore the same thing, they do not pre-exist the design process but must be found: desired. Furthermore, the monumental necessity of the architect from Caserta located in the landscape of abandonmentWithout this finding her work is incomprehensible. More an urban or rural area is left to himself, abused, abandoned, seems to affirm Servino, and is more suitable for developing this type of antibody: a monumentality that is formed starting from elementary archetypal elements, and returning to score after through a process of rewriting, the territory itself that created them. And 'the "picking" (admission elementary and primitive, usually of rural use, built with minimal means and waste materials) to become a monument, installed, for addition , above abandoned automobile viaducts (contemporary monumental excellences of the Bel Paese), or overlooking the edge of a quarry, which the landscape itself has remodeled (devastating it?). A marginal work that remembers the operations of Gilles Clement from afar, but whose meaning is overturned in its tragic and perturbing transformative intent: in this case, precisely preserving and restoring in search of mythical original conditions, has the meaning of destroying and devastate tradition. It is therefore the picturesque (with all its corollaries) that is indicated as a dangerous contemporary rhetoric. Monument as a reference to the work of memory; Monument as a unit of measure to put order in chaos Monument as a vehicle of political thought.

Monument as a memory and re-interpretation of the contemporary. 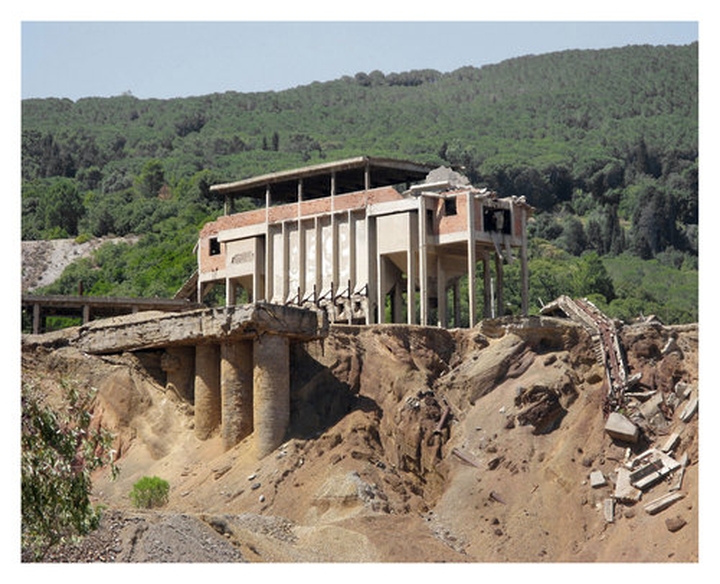 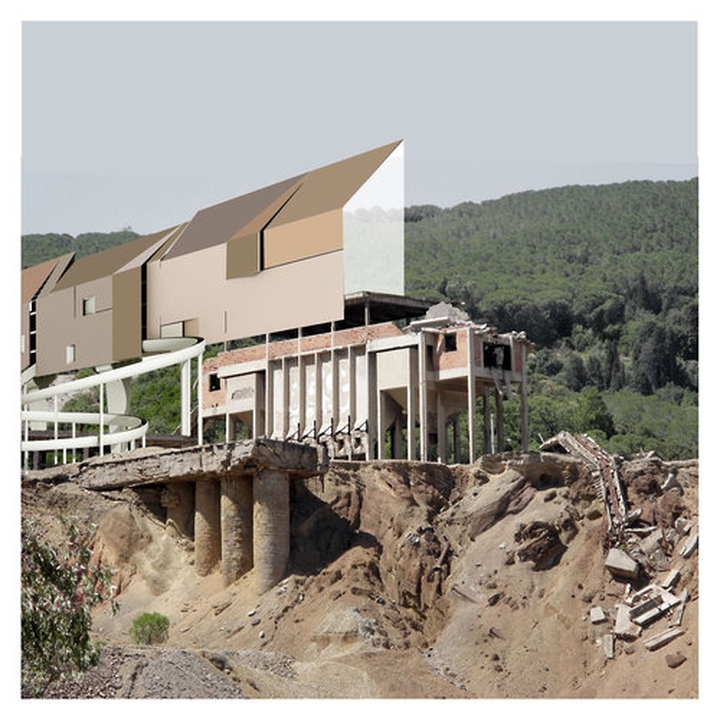 Only that which flees and remains tough: it is the "strum" "Manifesto of appropriation of popular archetypes "Ephemeral artifact and a thousand variations, which becomes monument. A warning imperishable, we presume, the transience of being human. All that remains translate quietly and without anguish: an act of love with which to inject into the contemporary such stresses, "from one body to another ... from one time to another." While aspiration, the difficulty lies in the invention of a new type. Servino seems at ease -a difference of most Italian contemporary architects - in transit incessant (a constant coming and going) on ​​the bridge that joins unstably old concepts to new tasks. The architect is here engineer Memory: "One who builds pandering to universal principles. He who knows and uses the archetypes to transport them from one time to another ". He affects the ground with his thoughts: projecting a sense of an absence. Enriching the poverty of the stimulus with the cognitive hypothesis.

"Beauty is in the area" 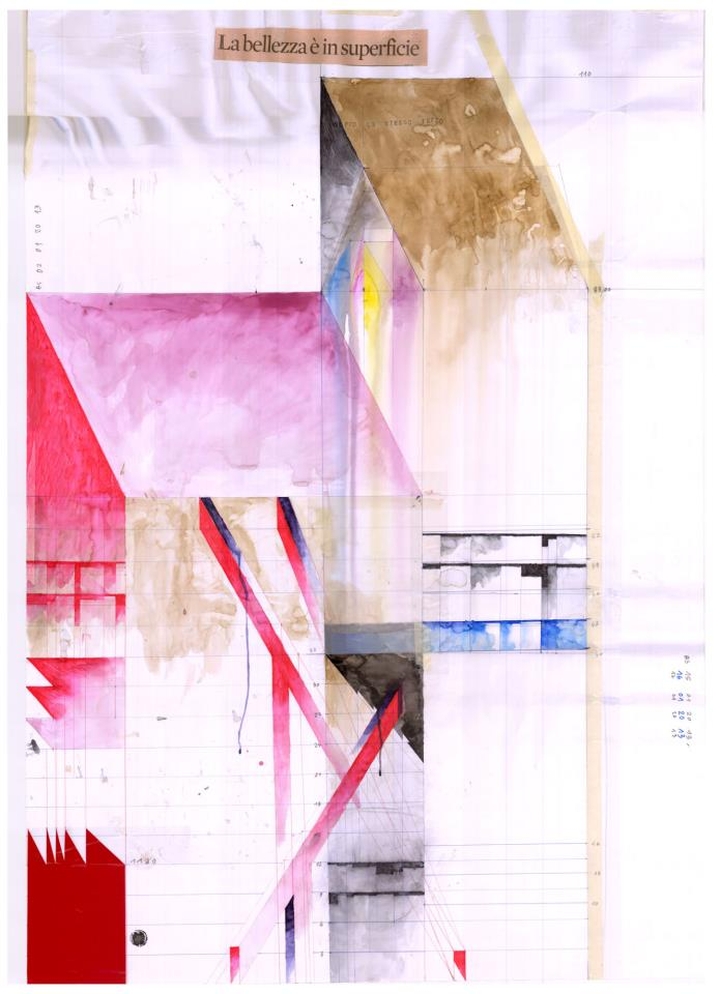 “The tragic hero - wrote Franz Rosenzweig - has only a language that suits him perfectly: silence (…). By keeping quiet, the hero breaks the relations that unite him with God and with the world”. The texts in the form of aphorism, the few words, the shy attitude with which Servino comments on his work, are perfectly suited to the dry vocabulary and the powerfully simplified grammar through which the architect sets up a multitude of variations, mastering with skilled craftsmanship elements. The temptation is to remain silent, but this tragicity, however, dissolves in the personal drama, in the lived: in the rhapsodic narration of the same content. Bringing it all back home - “bring it all back home”. The poetics (research and professional practice) of the Caserta architect comes from a sense of painful abandonment. Raffaele Cutillo, commenting on a famous drawing by Servino, spoke of the “scourge” as a measure of urban space, of the “Ransom of Misery through Architecture”. An arduous task, "improbus labor", without spectators, which does not admit spectators. A task that requires, today more than ever, a great dose of irony, “because irony means insistence on questioning, and detachment and measure of the phatos” [Cacciari 1995]. And the monument will finally be remodeled, occupied, retranslated, it will be a layer on which to build others.

Extreme and disturbing, this inhospitable, are the places where such visions can afford to take root and grow. 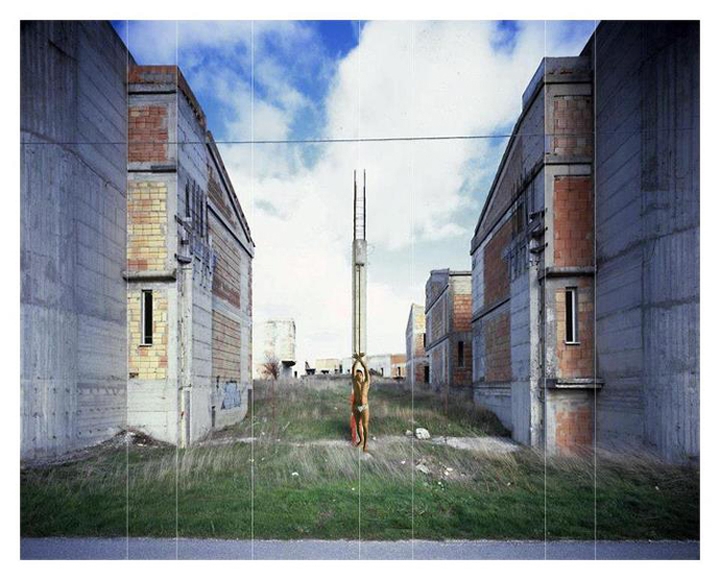