A Brenzone, idyllic village of Lake Garda, the 'Hotel Belfiore It has just inaugurated the suites designed by  Alberto Apostoli which will form, with the upcoming SPA, a minimal and seductive multifunction space: an entire floor dedicated to Ayurvedic philosophyReinterpreted in a creative and contemporary way by the architect.

Located on the ground floor, from where you can enjoy a lovely view over the lake, the "Wellness Floor" gives customers the pleasure of pampering and relaxation, prolonged in the privacy of their own room after having lived in the spa. At the basis of the general concept, the Ayurvedic suggests the pencil of four Apostles different environments which recreate the different doshas (vital energy), which are fundamental elements of this traditional Indian medical science.

The different suites each have an own identity aligned to the different doshas and in particular: 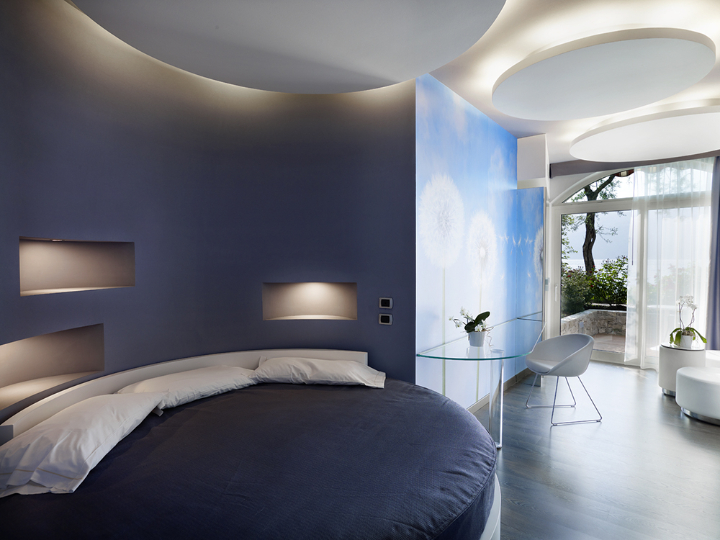 Suite Vata: composed of ether and air, is the principle of movement, tied to everything that is moving in the body (nervous system, respiration, blood circulation ...). Its qualities are: coldness, dryness, lightness, thinness, mobility, sharpness, hardness, roughness and fluidity.

These characteristics have been enhanced, at the design level, through the use of rounded shapes, as the bed white lacquer, the back wall containing niches in function spaces bedside table, some sessions and the three circular grandielementi that create the elegant countertop. Symbol of lightness is undoubtedly the table in extra clear custom designed and supported by a single leg, also totally crystal. 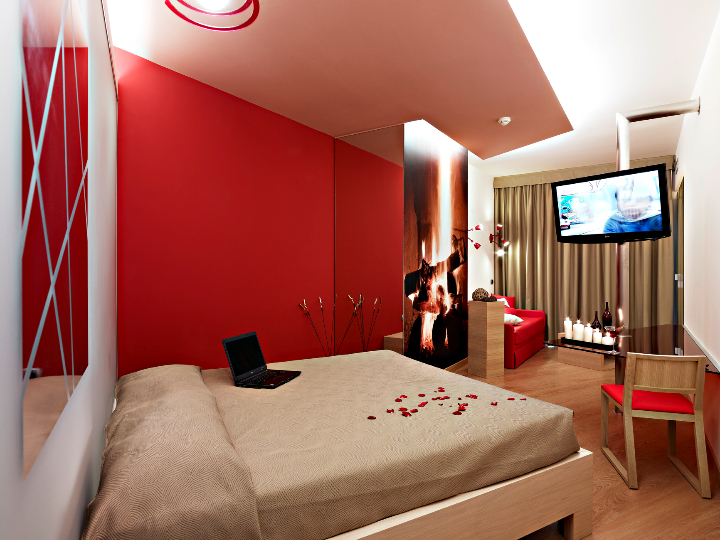 The room is dominated by the red of the fire and the graphic portrays the flame of a bonfire. The verticality of the flame is counterbalanced by a particular element in aluminum that comes out of the wall to "stick" in the red crystal table arguing television right in the middle of the suite. The bathroom is bounded by walls in satin and the interior design is custom made. 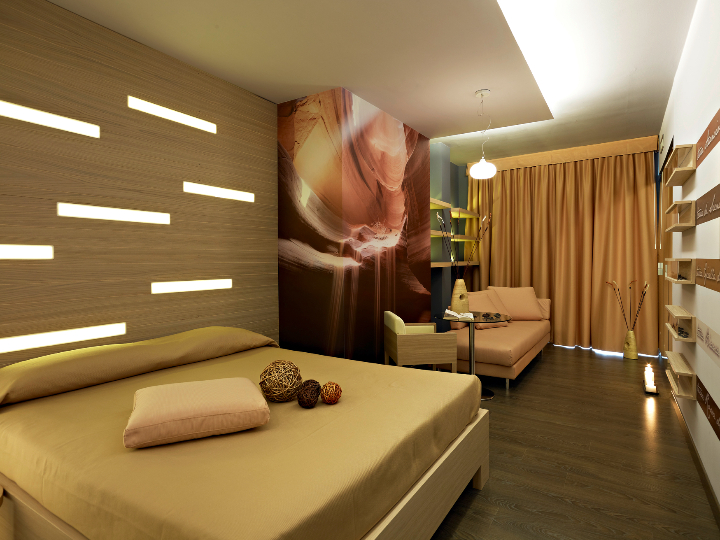 Suite Kapha: composed of water and land, is the dosha linked to cohesion, to take united, it belongs to the body fluids, lubricates and maintains body toensure solid and uniform. Its qualities are: coldness, moisture, weight, stability, opacity, softness, smoothness and density.

The graphics chosen for this suite takes up an impressive cascade of earth and sand that seems to cover the whole environment with its beige and its ocher. The property went on to create some display cases that will collect samples of famous lands (land of Siena, Verona, Herculaneum etc.). Particular, the inclusion of certain elements in the bright horizontal paneling behind the bed made of wood. 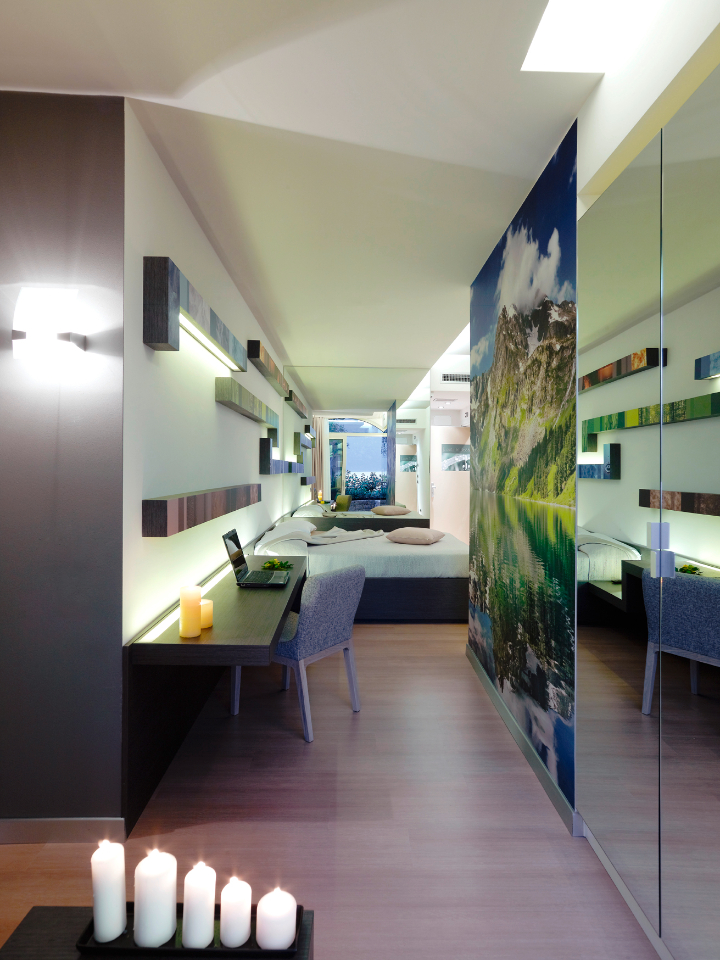 For the fourth room, we wanted to combine the characteristics of the three doshas, ​​calling it precisely: Tri-Dosha.This Suite is, although not nellacultura Ayurvedic purist, the perfect balance and is thus synthesis of the other doshas. Stand out the lighting fixtures designed specifically for this room and whose forms seem to want to weave the values ​​of the three doshas. The graficheriprendo the topics covered in the other rooms with a palette of colors that stimulate the different sensations of the host. Huge mirrors expand the space and help to define the neutral atmosphere but synthesis.

The corridor leading to the rooms is characterized by a wall on which the three-dimensional surface wave made of bamboo canes reconnects the same area to the future format of the aesthetic Spa. The doors of the rooms - flush with the outside wall - are dominated by a band graphic which takes the internal image of the room and that reads the name and number of the same. Authentic filter between the spa area and the rooms, is the areadestinata to meetings, exhibitions and cultural events, realized through glass walls and a very sober use of color and neutral. The space, in the future, will also host a vitamin bar naturist theme.

Apostles summarizes the project: "The property was thinking of a Spa strongly thematic and ethnic; the idea of ​​working on the entire plan arose almost naturally through the extension of an Eastern philosophy inside the rooms and common areas. It was challenging to try to re-read and in contemporary terms "the Garda" an ethnic theme and is, in many ways from the territory. I tried to create strong stylistic identity but capable of being able to, in part, compare and hold together with a few materialicomuni reinterpreted in terms of color, graphics and formal. The spa is the source of everything but each space still has a
own identity that does not necessarily need to be contextualized. Stimulates me a lot and always be able to interpret the different hotel rooms for different targets and, I think, the issue is more relevant than ever and full of developments and potential. "