Dakar is the capital and largest city of Senegal. It lies on the Cap-Vert Peninsula on the Atlantic coast and is the westernmost city on the African continent.

Cinematography is the art or science of moving the photographic image. It is the technique of film photography, including both shooting and developing the film.

Cinema: A theater is a venue, usually a building or space dedicated to viewing movies for entertainment.
Today, downtown Dakar, a city of 2,5 million people, has hardly any cinemas, with many of the existing ones having closed their doors in the past decade.

The aim of this international competition is to design a temporary cinema within the city of Dakar in Senegal. This competition hopes to achieve the following objectives:

_ Encourage and reward design excellence including function, structure and details.
_ Analyze how the development of a cinema within the surrounding neighborhood helps to create a liveable community.
_ Search, meet and highlight the unique aspects of the design of a temporary structure.
_ Knowledge of building design principles relating to cultural development within an urban area.
_ Promote the use of sustainable design in all aspects of the proposal.

Note: This is an international competition open to [AC-CA] For the sole purpose of generating ideas of contemporary design. 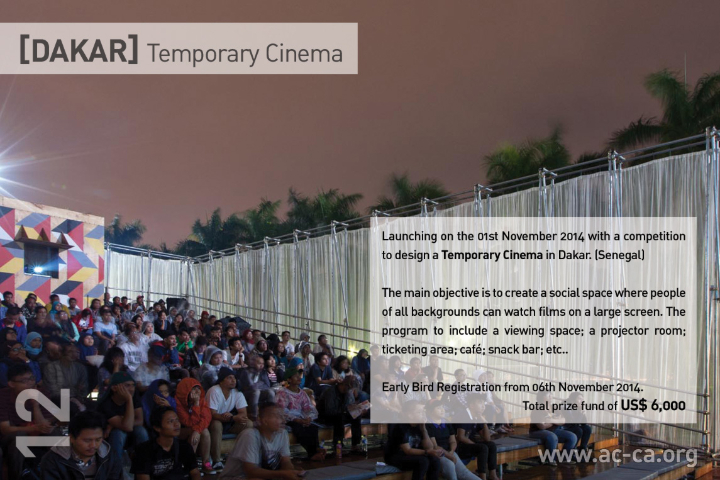